There has been a lot of speculation, much of it backed up by evidence, that over the past year, America’s “cause of death” statistics have been skewed. For reasons alleged to be both political and financial, people who did not have a fatal case of COVID were reported as dying from the disease. The classic example is the young man who died in a horrific motorcycle accident, who tested positive for COVID in the postmortem, and was listed as a COVID victim.

Less likely, however, is the possibility that “deaths from all causes” have been misrepresented. Assuming we can rely on the CDC statistics, the data tell a grim story. During the 12 month period between April 1, 2020 and March 31, 2021, the number of people dying in the United States exceeded the recent historical average for that same April through March period by 701,680. If anything, this number is understated, because CDC data can take up to eight weeks to fill in completely and our dataset is only updated through May 12.

This is an astonishing increase, representing a 25 percent increase over total deaths in previous years, even when adjusting for population growth. The average deaths for the same 12 month period over the last six years, prior to the most recent 12 months, were 2,845,200. That compares to 3,546,880 in the 12-month period through March 31. COVID may have targeted mostly the old and the weak, but target them it did. Based on reporting trends observed over the past year, it may be that so-called “excess deaths” in the United States for April 2021 may finally have fallen back to normal. The graph depicted below shows the shape of these excess deaths. 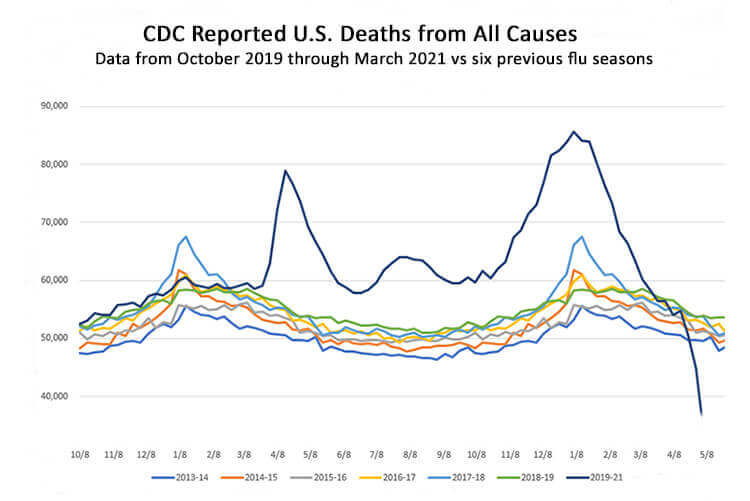 On the above graph, the horizontal axis starts at the first week of October, which is typically the beginning of flu season. As can be seen on this 18-month continuum, the flu season starts again around two-thirds of the way across, as October repeats. The cluster of tightly packed lines shows total deaths rising starting in October, peaking in January, then falling sharply until the end of March. After that there is a shallow valley, as total deaths reach minimums in August before slowly rising again. The only outlier, apart from the COVID line in dark blue, is the light blue line signifying the particularly bad 2017-18 flu season. But even in that bad year, total deaths did not exceed 70,000 in any given week, and the counts dropped sharply back into the cluster by the end of March. This year of COVID, however, was completely different.

As can be seen on the dark blue line on the graph, total deaths rose almost vertically in April 2020, peaking at 78,937 for the week of April 15. Total deaths then dropped significantly, but never came near the averages for previous years. The first trough was on the week of June 24 when “only” 57,878 people died; this was still 14 percent over normal for that month. And then came the second wave in July, an increase that didn’t rise as high as the one in April, but was spread out over more weeks. But the most remarkable wave was yet to come.

It’s worth wondering why the third wave, by far the deadliest, didn’t get as much media hype. To be fair, anyone who watched television news reports in December and January where they dramatized what it would be like to take your last breath in an ICU, bright lights and a breathing tube descending, would not accuse the networks of inaction. But neither did the hype match the panic of April, or the “second wave” crisis of July. For whatever reason, the third wave, by far the biggest, came and went. At its peak during the week ending January 6, 85,684 Americans died, nearly 60 percent more than average for that time of year.

The COVID Wave Recedes in America, For Now

Anyone trying to make sense out of what’s happened can be certain of only one thing: America’s legacy media, the online communication monopolies, and the medical establishment cannot be trusted. Their betrayal is proven by the censorship and suppression of early stage therapies, the ongoing emphasis on vaccines instead of treatment, and the inability for any dissenting voices to be heard and debated. This betrayal is particularly gruesome because COVID is not a hoax. It is a deadly killer, possibly set to get worse.

When vaccine specialist Geert Vanden Bossche, or virologist Dr. Sucharit Bhakdi, can still be found in podcast backwaters that have escaped the censors, their testimony cannot be refuted. They are denied the light of day, and so their arguments—that the vaccines being deployed will breed more potent variants of COVID at the same time as they compromise human immune systems—gain credibility. Lies, like mold and fungus, grow and fester in the dark, but only truth can survive the light of day. Sunshine is the disinfectant, open debate is the cure. But we’ll never know if these men are prophets or charlatans, because their words are suppressed.

As the more pessimistically inclined among us confront the specter of vaccine passports, mandatory booster shots every year to cope with an endless procession of increasingly virulent strains of COVID, likely medical history implants, travel restrictions, contact tracing, and everything else associated with “the great reset” including supply chain disruptions, rationing, riots, and a supermajority of voters utterly dependent on government, they must wonder: Who runs the world? You don’t have to be a conspiracy theorist to ask that question, though you might be one if you think you know the answer. Still, it’s an intriguing question. Is the world merely a chaotic ecosystem of individual egos, tribal communities, and fitfully coexisting nations? Or is something else happening?

A fascinating video, suppressed repeatedly by the major platforms, but surviving on the obscure website EarthHeroesTV.com, is an interview with Catherine Austin Fitts. About halfway through the 48 minute segment, Fitts asks the question: “Who runs the world?” Wisely, she doesn’t try to answer it. But she does quite a dance around the theme. Fitts, a former high-ranking official with HUD, then a financial entrepreneur, leads off by explaining that the world is moving into a new era of economic totalitarianism. She observes that the wealth of the world is becoming more and more concentrated into nations with advanced technology, and within those nations, disproportionately to a small elite. She claims the COVID pandemic is providing an excuse to institute controls necessary to convert the planet from democratic processes to technocracy.

Fitts says the COVID virus is being used as the means to compel mass vaccine injections that will eventually make it possible to digitally identify and track every person. These biometric markers will then be used to connect people to a new cyber currency, allowing complete control. She believes there are five sectors working in tandem to create this new world order:

Fitts is describing a dark version of futurism. Her perspective is negative, but lucid. Technology makes it much easier for a small group of people to get together and become very powerful. But why? Fitts offers a logical answer:

“If technology can make it possible for people to live 150 years, and it isn’t possible to keep this a secret, then why not downsize the population, integrate robots, and you can have a very wealthy and luxurious life without the management headaches?” In one particularly chilling quote, Fitts says “I was having a conversation with a venture capitalist, billionaire type, and he looked at me with these amazingly dead eyes and said ‘I can take every company and completely automate it with software and robotics and fire all the humans. We don’t need them any more.’”

Who runs the world? What if 700,000 dead Americans is just a preamble, and wave after wave of COVID variants rages across the nation in the years to come? Could it really get that bad? What is behind the doomsday cult that informs dialogue in America today? It isn’t just a deadly virus. It’s racism, suddenly amped up to represent an existential threat to civilization. It’s the “climate emergency.” And all of this panic is curated and rained down upon us in an unending deluge of propaganda designed to render us terrified.

Is it too late to promote optimism? Was the truth about the world as expressed by Danish economist Bjorn Lomborg too potent, a bright and hopeful truth, that “air and water are getting cleaner, endangered species and forests are holding their own, and the risks associated with global warming are exaggerated.” He contends that “more people than ever before, living in all parts of the globe, are becoming healthier, richer, and better educated; that the human race is living longer and more peaceably; that we’re considerably freer to pursue our happiness.”

Were things working out? Were peace and prosperity busting out all over? And if so, why did COVID have to kill that momentum? How can that positive momentum be recovered? Why does the “great reset” have to involve perennial disease, mass control, rationing, and repression? Who is right? The optimists or the pessimists? Are we on the verge of the great cull, or the long boom? Don’t ask Joe Biden. Another certainty in these times of great uncertainty is this: Joe Biden doesn’t run anything, much less the world.

The sad truth is we can no longer rely on any of our institutions to provide answers to these questions. The events of 2020 and 2021, from a presidential election that was purchased by technology billionaires to a virus that has been mismanaged from day one, nothing should surprise us anymore. Who knows? Maybe those recently publicized green triangles that operate in restricted airspace, go 13,000 miles per hour, execute 700 G turns, travel in air, water, and probably space, have no visible means of propulsion, and defy gravity, are the emissaries of those who truly run the world.

We may hope that COVID has run its course, and we may mourn our 700,000 dead. On the other hand, strange and terrifying times may have just begun.