Maricopa County election officials tampered with election records just days before the equipment was delivered to the Arizona Senate for the 2020 election audit, according to the Senate Liaison for the Maricopa County 2020 Forensic Election Audit.

Before the machines were turned over, a directory full of election databases was deleted by an administrator, resulting in spoliation of evidence, the Maricopa County Audit’s official Twitter account alleged in a tweet late Wednesday.

Breaking Update: Maricopa County deleted a directory full of election databases from the 2020 election cycle days before the election equipment was delivered to the audit. This is spoliation of evidence! pic.twitter.com/mY0fmmFXAm

State Senate President Karen Fann wrote a letter to Jack Sellers, the chairman of the Maricopa County Board of Supervisors, demanding an explanation as to why the databases were deleted.

“We have recently discovered that the entire “Database” directory from the D drive of the machine “EMSPrimary” has been deleted,” Fann wrote.

This removes election related details that appear to have been covered by the subpoena. In addition, the main database for the Election Management System (EMS) Software, “Results Tally and Reporting,” is not located anywhere on the EMSPrimary machine, even though all of the EMS Clients reference that machine as the location of the database. This suggests that the main database for all election related data for the November 2020 General Election has been removed. Can you please advise as to why these folders were deleted, and whether there are any backups that may contain the deleted folders?

The senator also demanded an explanation for two other major issues that have arisen in the course of the Senate’s ongoing audit.
First, she cited the county’s refusal to comply with legislative subpoenas.

To date, attorneys for Maricopa County have refused to produce virtual images of routers used in connection with the general election, relying on a conclusory and unsupported assertion that providing the routers would somehow “endanger the lives of law enforcement officers, their operations, or the protected health information and personal data of Maricopa County’s citizens.”If true, the fact that Maricopa County stores on its routers substantial quantities of citizens’ and employees’ highly sensitive personal information is an alarming indictment of the County’s lax data security practices, rather than of the legislative subpoenas.

Similarly, the County’s assertion that producing the internet routers for inspection would cost up to $6,000,000 seems at odds with Deputy County Attorney Joseph La Rue’s prior representation to Audit Liaison Ken Bennett that the routers already had been disconnected from the County’s network and were prepared for imminent delivery to the Senate.

Nevertheless, in an effort to resolve the dispute regarding production of the routers, we propose that agents of CyFIR, an experienced digital forensics firm and subcontractor of Cyber Ninjas, review virtual images of the relevant routers in Maricopa County facilities and in the presence of representatives of the Maricopa County Sheriff’s Office. Such an arrangement would permit Maricopa County to retain custody and monitor the review of router data, while ensuring that the Senate may access the information it requires—and to which it is constitutionally entitled—to successfully complete its audit. The Senate has no interest in viewing or taking possession of any information that is unrelated to the administration of the 2020 general election.

Separately, Maricopa County has refused to provide the passwords necessary to access vote tabulation devices. Its attorneys’ insistence that the County does not have custody or control of this information is belied by the County’s conduct of its own audits, which, if they were as comprehensive as they purported to be, almost certainly would have entailed use of the passwords to examine the tabulation devices, and it strains credulity to posit that the County has no contractual right to obtain (i.e., control of) password information from Dominion.

Fann also voiced concern over “anomalies” observed in the chain of custody of ballots.

“As the audit has progressed, the Senate’s contractors have become aware of apparent omissions, inconsistencies, and anomalies relating to Maricopa County’s handling, organization, and storage of ballots,” she wrote.

Ward suggested that the reason Maricopa County and AZ Democrats have been trying so hard to thwart the audit is to cover up election malfeasance.

Earlier Wednesday, Ward said in a video update of the audit that new information is coming out nearly every day shedding light of how poorly the 2020 election was supervised in Maricopa County.

Former President Trump on Thursday weighed in on Fann’s “devastating” letter on Maricopa County’s election irregularities in a press release:

“The Fake News and Lamestream Media is doing everything they can not to cover this major story. They just refuse to talk or report about it,” Trump said. “They don’t want the United States or World to see what is going on with our corrupt, third world election.” 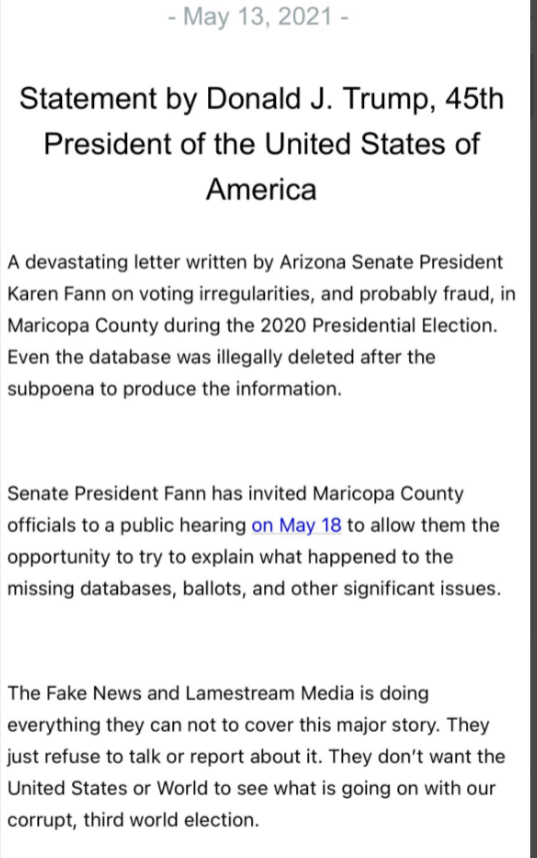