While there may not be a more succinct description of the new and radical rules Americans face these days, Hanson is covering familiar territory. But what is the cause of these changes?

It doesn’t require a conspiracy theorist to suggest these wholesale shifts in American culture are not happening by accident. Nor are they solely the result of nefarious intent, at least not among everyone occupying the highest rungs of power and influence in America. What motivates members of the American elite, billionaires and corporate boards alike, to approve of these radical changes?

Unsustainable Prosperity for Me, But Not for Thee?

In the name of saving the planet, for example, new suburbs will become almost impossible to construct. Single-family detached homes with yards will be stigmatized as both unsustainable and racist, and to mitigate these evils, subsidized apartments will replace homes, with rent subsidized occupants. As America’s population grows via mass immigration, the footprint of cities will remain fixed. The politically engineered housing shortage will force increasing numbers of Americans into subsidized housing. All of this is already happening, but it’s just getting started.

Similar cramdowns will occur with respect to all social amenities that consume resources. Land is just the primary example, but water, energy, and transportation will all be affected. This new political economy will also depopulate rural areas—through corporate consolidation of farmland as regulations and resource costs drive small operations under and through punitive regulations and insurance burdens driving people out of the “urban-wildland interface.” Outside of major cities, for the most part, the only people left will be extremely wealthy landowners and corporate employees.

Joel Kotkin, who has studied and written about demographics and migrations for years, recently authored The Coming of Neo Feudalism: A Warning to the Global Middle Class. Of all the shorthand descriptions for the political economy that is coming, feudalism may be the best fit. As Kotkin puts it:

The new class structure resembles that of Medieval times. At the apex of the new order are two classes―a reborn clerical elite, the clerisy, which dominates the upper part of the professional ranks, universities, media and culture, and a new aristocracy led by tech oligarchs with unprecedented wealth and growing control of information. These two classes correspond to the old French First and Second Estates.

Below these two classes lies what was once called the Third Estate. This includes the yeomanry, which is made up largely of small businesspeople, minor property owners, skilled workers and private-sector-oriented professionals. Ascendant for much of modern history, this class is in decline while those below them, the new Serfs, grow in numbers―a vast, expanding property-less population.

Both Kotkin and Hanson assert that the trend towards feudalism can be reversed if people understand what is occurring and react effectively. To that end, it is necessary to understand that behind the obvious benefit these new rules have in service of the elites and their interests, there is a moral pretext. How solid is that pretext, that America’s middle class is not sustainable?

The following chart shows American energy use per person over the past 20 years compared to China, India, and Nigeria. Although expressed in kilowatt-hours, the chart is referencing all forms of energy consumed, merely using kWh to normalize everything—oil, gas, coal, nuclear, hydro, renewables—into a common unit. 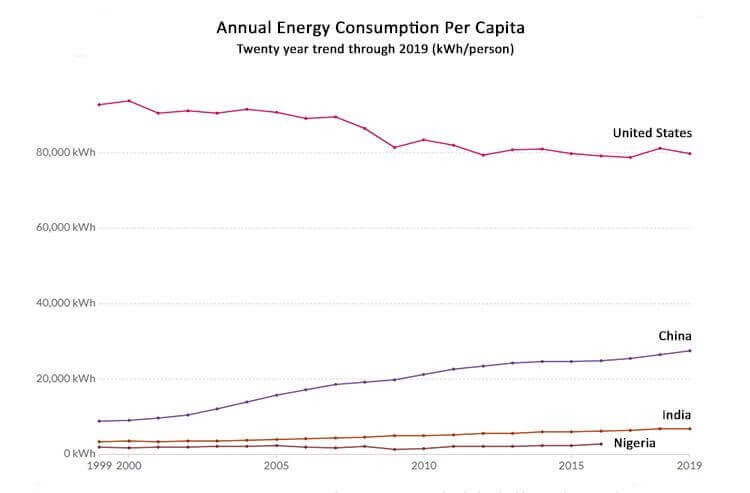 What is notable on this chart is that Americans have successfully reduced their average energy consumption over the past 20 years, although not by much. But where will American energy consumption eventually level off? How much lower can it go? Notice how China, a nation with more than four times America’s population, has tripled its per capita consumption of energy over the past 20 years, yet still only consumes one-third as much as the average American consumes. India, a nation nearly equal in population to China, is way behind but destined to catch up fast. The average Indian today consumes less than one-tenth of what the average American consumes. What will happen in the next 20 years?

If these comparisons aren’t dramatic enough, notice Nigeria’s stats. With a population that has just topped 200 million, Nigeria is the demographic heavyweight in Africa, a continent where the population is projected to double to more than 2.5 billion by 2050. As of 2015, the average Nigerian only consumed one-thirtieth as much energy as the average American consumes.

Energy is the prerequisite for economic growth. If you have abundant energy, you can have abundant water, transportation, communications, light, heat, mechanized agriculture, refrigerated medicines; everything. And the cold fact confronting America’s elites is this: For everyone on earth to consume half as much energy as Americans consume, total energy production worldwide would have to more than double.

Can America’s middle class sustain its current lifestyle while consuming half as much energy as it does today? Or is it feasible for energy production in the world not merely to double, but quadruple? And if that can be done, is it possible without paying too high a price in terms of environmental impact? And if it cannot be done, can the American experience, which is to enjoy a lifestyle many times greater than that enjoyed by most of the rest of the people on earth, be justified? And if so, why?

These are tough questions. Unequivocal, simple answers to these questions do not exist. But the conventional answer that motivates America’s elites must nonetheless be challenged, because until it is, they will cloak their consolidation of power and their elimination of America’s middle class in the moral imperatives of saving the planet and eliminating racism.

It may seem illogical to suppose the “systemic racism” canard is more easily disposed of, but that’s only because racism, by design, is the ongoing obsession in American media and politics. Despite this well-engineered obsession, resolute opposition to “anti-racist” racism is growing because it is an obvious lie. Racism, from all sources, still exists. But systemic racism against nonwhites, from every angle you look at it in modern American society, simply does not exist. Politicians, journalists, and academics need to find the courage to explain the facts and turn the tide. It can be done.

Saving the planet, on the other hand, is a moral imperative with ongoing urgency.

This urgency may be divided into two broad categories. The first is the traditional concerns of environmentalists, to preserve wildlife and wilderness, and reduce or eliminate sources of pollution. While environmentalists, especially in the United States, often go way too far in addressing these traditional concerns, these are genuine moral imperatives that must be balanced against the economic needs of civilization. This is an important but manageable debate.

The second, new concern of environmentalists, however, is the “climate emergency.” Grossly overblown, hyped for reasons that are transparently opportunistic, fraught with potential for tyranny and punitively expensive, the “climate emergency,” more than anything else, is the moral justification for destroying the American middle class.

In the name of saving the climate, federal and certain state authorities are restricting fossil fuel development, despite the fact that fossil fuels—coal, oil, and gas—still produce 85 percent of worldwide energy, with nuclear and hydropower making up another 11 percent. If energy production is going to double, which at a minimum it must, how on earth will that be accomplished without fossil fuel? It is impossible.

And the planners who are suppressing fossil fuel development worldwide know it. By creating shortages and raising prices for everything, they intend to reduce median rates of consumption in America to a fraction of what it is today, and render a middle-class lifestyle completely out of reach to the average American. In doing so, they’ll amass even more wealth for themselves.

There is another path. By focusing on the most likely predictions instead of the most catastrophic, nations can focus on climate resiliency—something which is a good idea anyway—while continuing to develop clean fossil fuel and also continuing to develop leapfrog technologies such as nuclear fusion. The environmental benefit of this approach is tangible and profound: with energy comes prosperity, with prosperity comes lower birthrates. With energy, inviting urban centers are possible, and urbanization takes pressure off wilderness. In both cases, with abundant energy, people voluntarily choose to limit their family size and move to cities.

A moral case for fossil fuels can outweigh the supposedly moral case against fossil fuel. Americans have to be willing to fight that fight, along with every other tyrannical edict attendant to the “climate emergency,” starting with the restrictions on urban expansion and single-family homes.

With adherence to the principles and culture that made America great—competition, private ownership, rule of law, minimizing corruption, and rewarding innovation—America’s middle class can survive and grow. But feudalism is a viable alternative, especially lucrative to the multinational corporations and globalist billionaires who will never call it by that name, hiding instead behind a moral masquerade.