Over the weekend, the traditional Harvard versus Yale football game was interrupted during halftime by about 150 student activists, spontaneously joined by hundreds of fans, to protest climate change. Occupying the area around the 500-yard line, the protesters chanted “Hey, hey! Ho, ho! Fossil fuel has got to go!” The game resumed after about 30 students were arrested and the rest left.

It would be reasonable to suppose that people who manage to gain admission to Harvard and Yale are among the most gifted students in America. But when it comes to swiftly eliminating the usage of fossil fuel, have they done their homework?

Around the world, billions of people are now convinced that catastrophic climate change is inevitable if humanity continues to rely on fossil fuels. Most developed Western nations, along with the United Nations and other supranational organizations, are promoting aggressive policies to replace fossil fuels with renewable energy. While a scientific debate remains, especially with respect to the severity of the predicted climate change, it is the economic challenges relating to rapid elimination of fossil fuels that require urgent examination.

The reason for this is simple: At this time, there is no feasible economic scenario whereby worldwide fossil fuel usage does not increase steadily for the next several decades. To dispute this assertion, several indisputable facts would have to be ignored. For starters, shown below is a chart illustrating just how large a percentage of global energy remained dependent on fossil fuels over the past ten years. Using data provided by the British Petroleum Statistical Review of World Energy, which is the most authoritative source available, on this chart, the total energy consumed in all of its forms—oil, gas, coal, nuclear, hydro, and renewables—are expressed as million metric tons of crude oil (MMTO).

By converting quantities of energy from various sources into a single normalized unit—the petroleum industry uses units of crude oil, economists use BTUs, scientists use joules—it is easy to see how much each type of fuel contributed to total global energy consumption over the past decade. As shown, renewables—solar, wind, geothermal, and biomass/biofuel—only comprised 4 percent of total energy consumed in 2018. 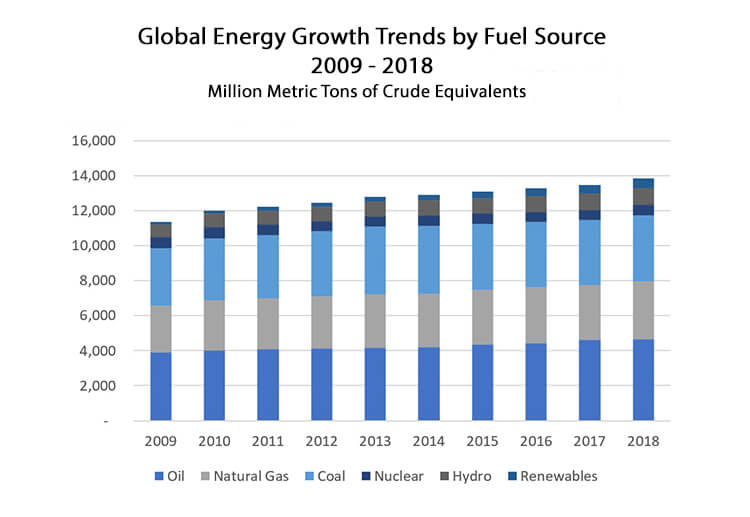 To get a better idea of exactly what types of renewables were part of the global energy mix in 2018, the next chart provides details. The top producer was wind at 1.7 percent, followed by solar electricity at 0.8 percent, biofuel at 0.7 percent, and all others (mostly geothermal) at 0.8 percent.

But there are serious problems with biofuel. According to the World Bioenergy Association, biofuel crops already consume an astonishing 550,000 square-miles of land. This represents 5 percent of all arable land area on earth—to produce less than 1 percent of global energy.

To account for this, either solar and wind installations must be oversized sufficiently to generate adequate daily power during the times of the year when the hours of daylight are the shortest and wind is the least reliable, or batteries and other electricity storage solutions must be deployed. These electricity storage farms would have to be capable of storing enough energy to supply large cities for months at a time.

Even according to former Energy Secretary Ernest Moniz, a supporter of renewable energy who served during the Obama Administration, California’s 2050 “decarbonizing” targets “can be met only with breakthroughs in a portfolio of affordable technologies.”

Meanwhile, in California and around the world, hundreds of billions of dollars are being invested each year on technologies, such as gargantuan land-based and offshore wind farms, that are extremely disruptive to ecosystems. These investments only yield adequate returns when the costs to provide grid connections and upgrades, as well as backup capacity including quick-start natural gas power plants are socialized and taxpayers and ratepayers foot the bill. 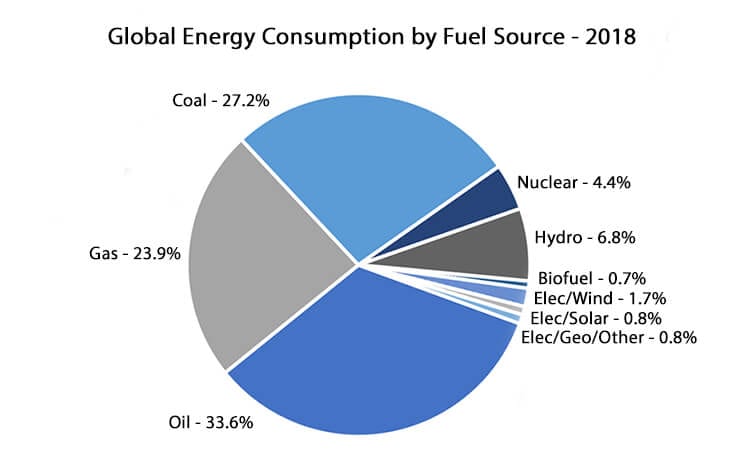 Despite the incredible cost, and the likelihood that many solutions being implemented today will be obsolete within a few decades, if not in a few years, political support for decarbonization remains strong. But even if tens of trillions were spent, can it be done? Here is where the algebra of energy consumption presents challenges to the decarbonizers that may be unsolvable.

The next chart shows the average amount of energy an American consumed in 2018, compared to their counterparts in China and India.

A few things immediately jump out. First, it is clear that in the past 10 years, Americans did not lower their per capita energy consumption, despite driving more fuel-efficient cars, deployment of mass transit options and urban densification, regardless of more efficient laptop and cell phone batteries, “smart” utility meters, “connected” appliances, and so on.

Can Americans significantly reduce their per capita energy consumption? The most recent data does not yet show that they can.

Comparisons to China and India highlight just how far behind the rest of the world is in terms of average energy consumption. As shown, the average person in China consumed 539 units of energy (expressed as gallons of crude oil equivalents) in 2009. By 2018, that had increased to 723 units of energy. China managed this at the same time as its population increased by 62 million. India logged similar progress, going from a per capita consumption of 130 units in 2009 to 184 units in 2018, at the same time as its population grew by 135 million. 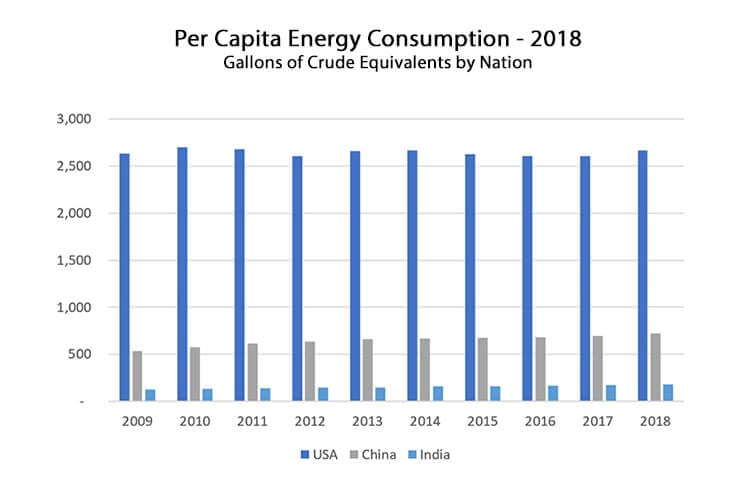 Based on these facts, the global energy algebra comes down to this: In the future, how much per capita energy is it reasonable for people to expect, in order for them to fulfill their aspirations to become educated, engage in productive work, afford entertaining diversions in their spare time, and raise their families in a nation where the infrastructure—all of it, from hospitals and universities, roads and rail, airports and seaports, to a resilient water system and power grid—is robust enough to support their towns and cities?

To answer this, imagine that everyone on earth used only half as much energy as Americans use. And suppose, quite optimistically, that global population stabilizes at 8 billion. To accomplish this would require worldwide consumption of energy to grow from 13,865 MMTOs in 2019 to a staggering 34,621 MMTOs. That is, for everyone on earth, including Americans, to consume half as much energy as Americans currently consume, global energy production would have to increase to 2.5 times its current output.

Would that be enough? Americans, with all the emphasis and investment in energy conservation over the past 10 years, have not reduced their per capita energy consumption. Should global energy production then quintuple, so everyone on earth can use as much energy as Americans do?

Facing this enormous challenge, investments in renewables might focus on research into leapfrog technologies. The return on that investment may enable decarbonized sources of energy to arrive sooner than anyone expects, not because they were mandated, but because they truly cost less than fossil fuel. Instead, R&D focuses too much on preposterous schemes such as “sequestering” CO2 in underground caverns, or mechanically removing CO2 from the atmosphere.

In the continent of Africa, where the population is currently projected to rise from 1.3 billion today to 2.5 billion within the next 30 years, either there will be cheap and affordable energy, or there will be a Malthusian event on that continent that will rival any similar such paroxysm in human history.

Looking forward, this is the moral case for fossil fuel. The fact is, there is no choice. Humanity needs to develop every single type of energy it possibly can as quickly as it possibly can, because that is how everyone on earth will readily have the opportunity to enjoy First-World lifestyles. Only then can people make First World choices to limit the size of their families and only then can they participate enthusiastically and effectively in efforts to preserve the environment around them. Only then will the allure of comfort and security outweigh the desperate imperatives of war. And soon enough, commercially competitive renewable energy—perhaps in forms we haven’t yet imagined—will supplant fossil fuel.

People who demand rapid elimination of fossil fuel—regardless of their academic pedigree—need to either face the algebraic impossibility of doing that, or be honest and disclose their true motives.