The best that may be said of the drama playing out in Oregon this week is that it exemplifies the vast and growing distance between Left and Right in America today.

To see it in its worst (and, perhaps, clearest) light, however, it exemplifies the relentless onslaught of corporate leftist tyranny, in all things, and everywhere at once. It also illustrates the rising fury of an abused population slowly awakening. In Oregon’s case, a handful of Republican state senators are fighting an uphill battle to protect the people they represent from yet another attack by the climate crusaders.

Although the Left Coast of America may be deep blue, the disenfranchised interior parts of those states are an equally deep red.  Almost invariably, to drive east from Seattle, Portland, the San Francisco Bay Area or Los Angeles, is to drive into a GOP-controlled hinterland. A political map depicting Oregon’s 2018 gubernatorial election makes this plain—the entire eastern two-thirds of the state is Republican, along with the entire south coast and rural stretches of the north coast. The Democratic political machines in Portland, Salem, and a handful of college towns deliver enough votes to control the state, effectively denying a voice to everyone else. 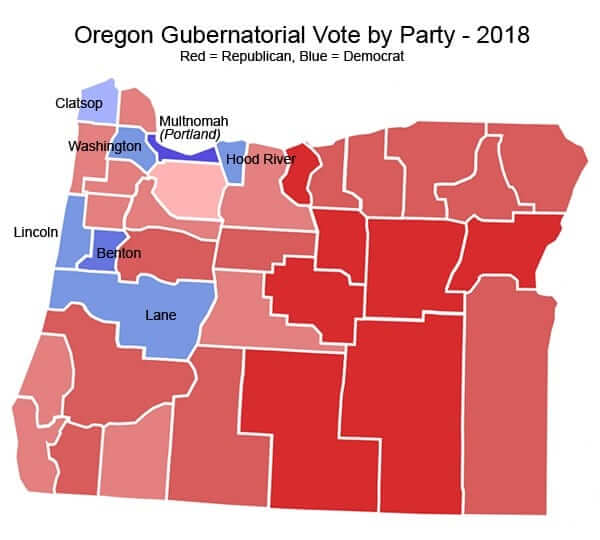 Democrats in Oregon hold what Ballotpedia and others refer to in state politics as a “trifecta”: control of the lower house, the upper house, and the governor’s mansion. But in the Oregon State Senate, the Democrats are still one seat short of being able to form a quorum to pass legislation without Republican participation, and last week the Republicans rebelled.

At issue is House Bill 2020, which would establish a “Climate Policy Office” to bring cap and trade to Oregon. The measure had cleared the House and after a floor debate, was poised to pass in the Senate, after which Oregon’s Democratic governor would have signed it into law. But the Republicans had one option left, and they used it. All 11 Republicans are at an “undisclosed location.” Some reports say they’ve gone to Idaho.

In response, Governor Kate Brown threatened to send state police to round up the absent legislators. Reacting to the governor’s threat, State Senator Brian Boquist, a former special forces lieutenant colonel in the U.S. Army, stated in a local television interview that “the governor better send Oregon state troopers who are ‘bachelors’ and ‘heavily armed.’” Boquist later said he would “refuse at all costs to be arrested as a political prisoner in Oregon, period.”

It’s important to recognize that these confrontations could easily move beyond rhetoric. Kate Brown is a dangerous puppet. Shown on the CNN website flanked (of course) by children wearing t-shirts that say, “I will be 25 when my climate fate is sealed,” Brown probably has no idea that she is a tool of the most anti-American, fascist gang of profiteers and power-mongers in modern American history.

The New Road to Serfdom
The climate propagandists have succeeded in brainwashing a generation of K-12 children, who now parrot apocalyptic sound bites with the same fervor that motivated China’s Red Guards back in the 1960s. Instead of Mao Tse-tung, we’ve got Al Gore, and instead of the transparent oppression of Orwell’s 1984, we have the softer fascism, the Soma-induced stupor of Huxley’s Brave New World. That makes sense. Because the entire “climate” movement is being marketed expertly by multinational corporations that stand to profit handsomely from green hysteria. Behind the sincere fanatics and befuddled children, serious, powerful people are setting themselves up to make trillions in profits, obliterate all competition, turn nations into fiefdoms, and rule the world.

When you examine the “solutions” demanded by the climate change crowd, there isn’t another logical explanation. It is impossible to replace fossil fuels with renewables, and every rational observer knows this. It is also ridiculous to expect other nations, most notably China and India, to follow America’s lead and even make the attempt, and every rational observer knows this as well. Finally, the solutions themselves are unlikely even to reduce CO2 emissions—consider the embodied energy in wind turbines and batteries, consider the ecological disaster of biofuel, consider the necessity of backup plants running on fossil fuel to compensate for darkness or lack of wind.

Moreover, if the climate crusaders are serious, why are they shutting down nuclear power plants instead of building new ones? Why are they tearing out hydroelectric dams? Why aren’t they demanding more research into commercializing fusion energy?

Yet “climate change” is the moral axe that cuts through every objection. If someone helpfully tries to point out the stupefying expense climate legislation inevitably imposes on ordinary working families, they’re called “denier” and silenced. They can lose their jobs, their reputations, their research funds, even their friends.

The “denier” epithet is leveled on people merely for pointing out the impracticality of “climate change” mitigation, even if they refrain from reminding us that CO2’s alleged harm is still a theory, not a fact.

Foreseeable Consequences
Thanks to earlier state legislation pushed by the climate crusaders, Oregon is already beginning to experience unaffordable housing because most new development must now take place within the footprint of existing cities.

An in-depth study by Oregon’s Cascade Policy Institute patiently ticks through the futility of these policies in a spacious, nearly empty state. But supposedly if you have uncongested roads and people don’t live on top of each other like rats, there’s more “greenhouse gas.”

Hardly anyone dares question this nonsense. Instead, people buy homes they can barely afford and become mortgage slaves. And for those who don’t work or don’t make enough to pay that mortgage, the government increases taxes so they can subsidize construction of “affordable housing.”

This is a perverse, oppressive, profiteering scam. To make housing affordable, simply permit builders to expand the urban footprint of cities. But in Oregon, the scammers were just getting started. It wasn’t enough to ruin the housing market so wealthy real estate investors could get wealthier, so government agencies could collect more property tax, and so major land developers could make more profit selling overpriced homes.

Now the climate crusaders want to create a huge new state bureaucracy that will team up with Wall Street bookies to skim a few dollars off of every unit of conventional energy that’s ever bought or sold. It’s called carbon emission trading.

Cap-and-Trade Scheming
It’s hard to imagine a bigger scam than carbon emissions trading. The scheme relies on incredibly subjective “carbon accounting” whereby every business has to assess how much CO2 they emit each year. The bureaucrats at the “Climate Policy Office” come up with a baseline allocation for each business, which documents how much CO2 they emit in the first year. Then, systematically, these businesses either have to emit less CO2 each year, or to purchase CO2 emissions permits that make up the difference.

People who plant trees, or in some way come up with projects that supposedly reduce CO2 emissions, are permitted to sell “carbon credits” to the companies over-emitting. Are you confused yet? They’re counting on that. And through it all, the bureaucrats get their salaries, and the trading bookies on Wall Street get their commissions. Trillions are on the table.

It’s worth noting, as an aside, that the policy of “emissions trading” often seduces libertarians, especially since it is a new profit center for their donors. Libertarians view emissions trading as preferable to a simple tax on gas and oil. But when you’re infatuated with your own mind, byzantine schemes to rob the public are always more seductive than simple theft. And after all, “market forces” are harnessed. Thanks so much.

Libertarians, when it comes to borders, trade, online censorship, getting Republicans elected, and now climate change, are always there when you need them to make things worse.

Meanwhile, as ordinary Americans work like dogs to pay mortgages on overpriced homes that sit on lots with yards too small to grow a tree or set up a trampoline, and spend twice as much for gasoline and electricity, and as American manufacturers relocate because of energy costs, the Chinese prepare to take over the world.

Has America’s corporate Left not thought this far ahead? Perhaps we’ll fight the next war with battery operated tanks and planes.

The solutions being proposed for “climate change” are so obviously unworkable and so obviously repressive that it is terrifying that more people cannot see it. Oregon’s Republican Senators should not back down. Not this time. Not ever.