Some scattered thoughts on the reaction of the Left to the Trump victory:

1)  I went to bed last night as reports were coming in from Los Angeles (and, apparently, across the country) of protests, demonstrations, vandalism, and even violence.

Gee. I wonder why? 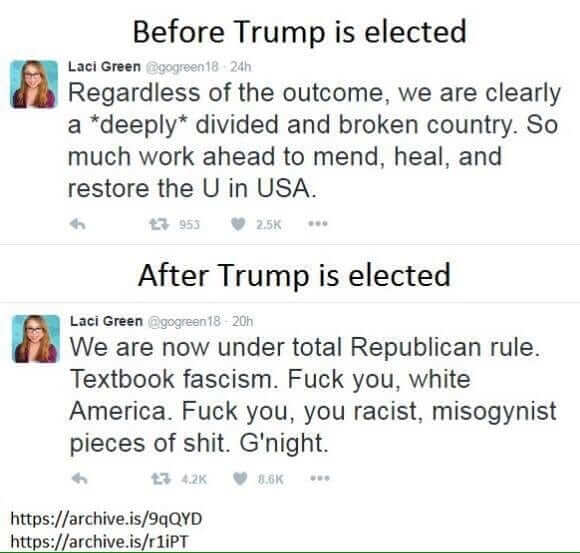 Let this sear into your memory. Today’s Left does not seek to persuade. Worse, it does not care that it is not persuasive. They don’t care that their condescension, bullying of dissenters, and emotional outbursts were precisely the behavior that cost them this election—though they reserve the right to engage in more of it if you do not comply with their demands.

They do not care because they do not think they must persuade. Persuasion would imply that there is more than one way to understand or approach a problem; that the human mind can be moved by reason and that reason is thing. They do not believe this. Their “arguments” take on the character of heated assertions so often because the governing philosophy of the Left is that opinion should just “evolve.” It is not about persuasion. It is about growing. So you have either grown or you haven’t.

There is nothing for the “evolved” crowd to do in the face of that but to signal their evolutionary superiority and to shame others who have not reached the same pinnacles. If you have observed the phenomenon of a committed leftist (especially a campus leftist) devolving into a muttering ball of tears and anger, you know how the attempt to argue with them usually proceeds. They can’t make arguments because they don’t actually believe in them. First they look at you in disbelief. Then they make it known that you are not much better than dirt and deserving of treatment equal to your station.

For these outbursts you can thank 50 years of piss-poor education in American civics, the devolution of our constitutional order in the face of a Progressive onslaught against its institutions, the hyperventilating, lying, unscrupulous press (and their willing accomplices in the NeverTrump right), and a handful of other factors I am probably forgetting right now but all contributing to this result: When significant numbers of people hysterically believe the country just elected Hitler, what do you expect?

2)  In the wake of two Obama victories, I do not recall the political/media/entertainment/education complex having any abiding concern for the “disappointed half” of the country. There were not psychologists on the morning news programs offering solutions for dealing with depression and anxiety. There were not grief counselors brought into the schools to deal with weepy students, or safe-spaces created for them at the colleges and universities. Professors did not cancel classes and take their students to the LGBT center to make “glitter jars” and “decompress.”

Further, I do not recall sympathetic coverage of the Tea Party rallies (where no violence or vandalism occurred) from those now seeking to “understand” the violence, disruption, and vandalism happening in our streets right now. I recall mocking and derision.

3)  While I generally oppose and reject the notion that Americans are made of jelly and I find well-intended but strained pleas for civility in the face of things that do not deserve a civil response off-putting, I do have a proposal that could have the desired effect without being a smarmy attempt to paper over our differences:

In election years, the MLB should move the World Series to begin after the election. Watching baseball together would be good about right now.

98 responses to “Three Reflections on the Post-Election Reaction”