Last night this publication was the subject of a drive-by tweeting at the hands of Eliot A. Cohen.  Cohen is currently a professor at Johns Hopkins University’s Paul H. Nitze School of Advanced International Studies (SAIS).  During the Bush (43) Administration he served as Counselor to the Department of State.  Cohen is an intelligent and accomplished man – someone from whom I would have expected better.  But such are the depredations of late-stage Trump Derangement Syndrome.

Cohen took it upon himself to tweet that we at American Greatness are cowards hiding behind a shield of anonymity.  On that score, I would make a few obvious points.  The first is that we are not anonymous, but more on that later.  Even if we were, anonymity does not diminish the power of a rational argument.  The authors of The Federalist Papers wrote as Publius.  Were they cowards?  Did it undermine the force of their argument in favor of ratifying the Constitution?  Did it make their insights into human nature and republican government untrue?  In addition to this bit of history, I would point Professor Cohen to Leo Strauss’ Persecution and the Art of Writing.  Political writing can be costly.  This sad fact has been noted in every society since before Socrates was forced to drink hemlock.  The fact that some people reasonably believe they must conceal their identities when they write if they wish to pursue employment in this nation’s elite institutions underscores the viciousness of our current politics.

To that I would underscore one final and very important point with regard to Professor Cohen’s jabs at our honor: We are not anonymous and our editors names are available on the site.  That Cohen chose that line of attack tells me he did not take the time to look at the site, let alone engage the ideas presented here.  Instead what we got was smug preening based on a false but easily verifiable premise. 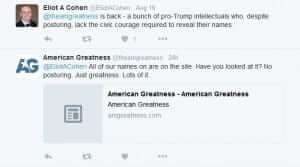 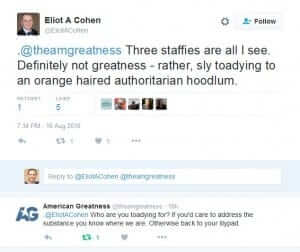 Our courage having been called into question, we replied to Professor Cohen, pointing out that he had erred when he said we “lack the civic courage to reveal (our) real names.”  Clearly not happy, Cohen replied with more bluster: “Three staffies (sic) are all I see. Definitely not greatness, rather sly toadying to an orange haired authoritarian hoodlum.”  We replied in kind, encouraging the former Counselor to the Department of State to address the substance of our arguments rather than offering up juvenile flings about Donald Trump’s skin tone.

Having been caught not doing his homework and being called out on it, Professor Cohen summoned up all of his civic courage and blocked us from following him on Twitter.  A portrait in courage.

To recap, Cohen started the scrap with a careless swipe about our non-existent anonymity, called us cowards, said we are Donald Trump’s toadies (some of us are not even Trump supporters, by the way), and when caught ran away and hid his Twitter account.

And the D.C. establishment wonders why people think they are feckless?

I happened upon a short essay called, “How Neocons Are Still Winning“while reading The National Interest this morning and still puzzling over our encounter with Professor Cohen.   It contained an interesting definition of neoconservatism that helps explain the Twitter exchange and sheds some light on the current divide on the American Right.

“What defines neoconservatism is a largely unchallenged belief that the United States is a virtuous nation with a moral entitlement to superior power for the global good.”

Neoconservatives believe that this moral entitlement to superior power extends to them or perhaps that it is most fully manifested in them.  Thus the outrage directed at Donald Trump and, not just Trump, but anyone who challenges neoconservative orthodoxy.  What should be a political disagreement between fellow citizens becomes a zealous defense of the one true faith – a faith that bestows moral entitlement on its adherents and will brook no contradictions.  Disagreement therefore becomes heresy.

It’s a shame.  We’d prefer an honest debate.  But neoconservatives believe that the debate is over and they won – and apparently are still winning if The National Interest can be believed.   Yet just when you think history has come to an end, human nature has a funny way of reasserting itself.  And today’s globalist orthodoxy is being challenged throughout the Western world as people wake up to find that the sovereignty they took for granted has been slowly ceded into the hands of a meritocratic and anti-republican elite.

3 responses to “The Neoconservative Way: A Primer”