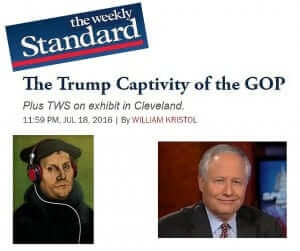 The Republican Party is broken. On that, at least, Bill Kristol and I agree. Kristol published a piece in The Weekly Standard this week that said more about the rupture than he may have intended.  The piece is entitled The Trump Captivity of the GOP evoking Martin Luther’s famous Reformation treatise The Babylonian Captivity of the Church.  Luther contended that the Church, meaning the people, was held captive to the priesthood who were, among other things, withholding the cup in the Lord’s Supper from the laity.  Luther rejected the notion that priests were necessary intermediaries between God and man, arguing that Jesus Christ is the only necessary and all sufficient high priest mediating on behalf of His people.

In alluding to Luther’s work Kristol betrays a worldview that is all too common among conservative intellectuals – and that goes a long to explaining the growing gulf between them and the rest of the country.  It is a view that has often been called elitist, but it is more correctly called priestly, even gnostic.  Kristol and those like him (many if not most conservative writers and intellectuals) have come to believe that they hold a secret knowledge that they must mediate for the people.  It is a view that in the modern era has been most associated with the Left.  It is the Hegelian view expounded by Max Weber and then put into practice by Woodrow Wilson and the Progressives of government by “experts.”  Unfortunately, this noxious and anti-republican idea has infected much of the Right as well.

Just days ago, we wrote the following in our Declaration of Independence From The Conservative Movement:

The once-vibrant political movement that nominated Barry Goldwater, elected Ronald Reagan, and defeated global communism has become ossified and unthinking to the point that conservative intellectuals act like priests mediating unknowable truth to the masses and administering the sacraments of conservative orthodoxy.

And, as if on cue, along comes Kristol proving the point.  He writes:

Everything would have been great if only the stupid, clumsy, stodgy voters had listened to The Weekly Standard and nominated , , , , , , did we mention Mitt Romney?  All approved by the priests of Conservatism, Inc. but not by voters.  And that does not make the priests happy.

Let’s also remember that the title of Luther’s treatise is a reference to the 70 year captivity of the Israelites after the Babylonians conquered Judah and sacked Jerusalem.  The Babylonian captivity of the Israelites was God’s judgement on them for breaking the covenant and worshiping idols.  Luther was picking up one of the themes of the prophet Jeremiah – that the priests had allowed and in some cases led the people of Judah into idolatry – and arguing for reformation of the church.  Something similar is going on today in Republican politics.

But contra Kristol, the GOP isn’t held captive by Trump.  Rather, the millions of Republicans who voted to elect him as the nominee of the party see Trump more as Luther – the one starting a reformation of the party by breaking the shackles that have held it fast to its priestly class.  It is the conservative priests who led the people astray and departed from principles upon which this country was founded.  It is the priests of Conservatism, Inc. that have held Republicans captive.  Donald Trump did nothing more than give voice to the discontents of people who wanted to take back control of a political movement that lost its way and became alienated from the people it claimed to represent.

There will be a counter-Reformation at some point, sooner if Trump loses, or later if he wins.  The Empire will strike back, if I can mix my metaphors.  But Americans who believe in free, limited, constitutional government, those who believe in the natural rights of man as expressed in the Declaration of Independence would do well to recall how we got here and ask if, going forward, we want a class of conservative priests who alone possess the secret knowledge or if, instead, we believe, as Thomas Jefferson and the signers of the Declaration did, that the truth that all men are created equal and are endowed by their creator with certain inalienable rights is self-evident to all men and that priests are unnecessary.  Great teachers to educate each generation of Americans?  Yes and lots of them.  But priests, who stand between the people and the truth?  No, that’s what got us here.

5 responses to “But Bill, Why Were They In Babylon?”