One of our recent guests (see the graphic below) at Riley’s Farm wanted to make sure people know her family of “15+” (including teenagers) have all taken the mRNA shots without any negative consequences. So be it. I should think that would be obvious. If the mRNA shots were simply killing everyone, I think even Anthony Fauci would reluctantly call a halt to the program. If you had to walk past a mountain of body bags at Walgreens, just to get your jab, even comedian Heather McDonald—who fractured her skull, fainting, after bragging about Jesus loving her jabs—might think twice. 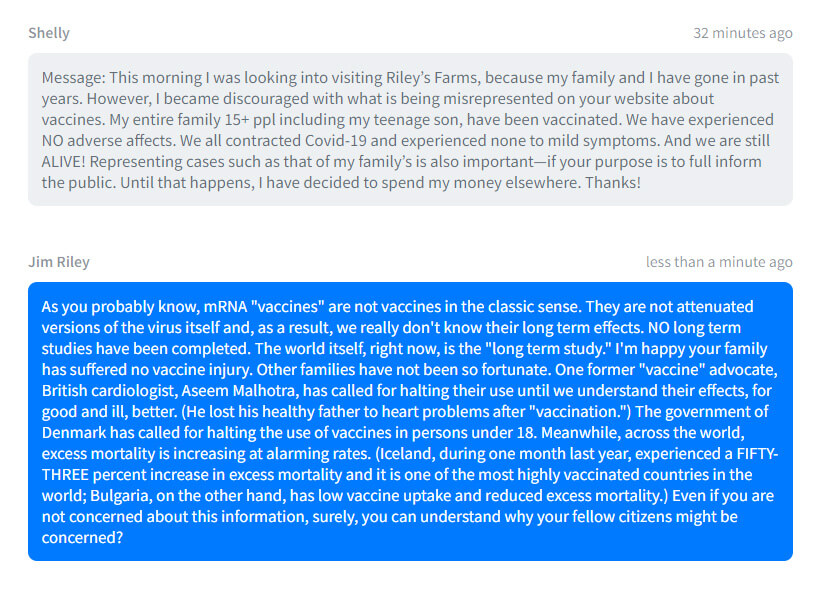 No, for most people, I’m sure, the mRNA shots won’t cause any problems. I’ve known hundreds of people who have taken them without reporting any negative effects. I’ve also known at least one person who died of a heart attack after his booster. I know of another fellow who has had to take a few ambulance trips since inoculation and a female relative who lost her unborn child. Another one of our workers, when asked, reported chronic fatigue since taking the shot. A friend’s ex-wife, thought to be in perfect health, recently died of a heart attack.

But let me be clear: these do appear to be exceptions, and they may have nothing to do with the inoculation. You will probably be perfectly fine. Take a victory lap. Post your jab on social media. Feel the glow. Your decision is your decision.

We do, however, need to begin admitting a reality that can’t be denied: the mRNA shots appear to pose risks that some of your fellow citizens don’t feel obligated to take. At the outset, of course, all medications pose a risk of negative side effects, but in one recent study, seven out of 202 adolescent boys developed myocarditis or pericarditis after taking mRNA inoculations. (Some folks point out the absence of a control group in this study, but would it be reasonable to expect that 7 of 202 adolescents randomly develop heart inflammation? Seriously?) Other studies put the ratio at more like 28 out of 100,000, but the link between mRNA shots and an elevated risk of male adolescent heart inflammation seems to be more and more clear. And sadly, there is nothing “mild” about scarring of the heart. Heart cells don’t repair themselves. We’re talking about a very likely death sentence for most people who contract it.

Denmark may have taken this into consideration when it disallowed inoculation for those under 18 years old, which leaves us to ask jab-fans the question: Is Denmark, that collectivist, postmodern paradise, doing this to boost its conspiracy theory street cred? Are the Danes guilty of running from “The Science™”— or are the dangers just becoming too real to ignore? Is British cardiologist, and one time mRNA fan, Aseem Malhotra, succumbing to paranoid delusion when he asks that their use be halted until we understand the science better? Should heavily-inoculated Iceland simply be happy with a 53 percent increase in excess mortality?

After 39 infants died without explanation in Scotland, and the rate of such deaths more than doubled, British doctor John Campbell was a marvel of English reserve when he reacted to Public Health Scotland’s decision not to study the vaccine status of their mothers, on the basis this might increase vaccine hesitancy. Hello? Babies might be dying but we don’t want to know the cause since that might keep mothers from doing anything about it? We wouldn’t want previously vaccinated mothers feeling bad about their inoculation even if it prevented other mothers from doing the same thing. Does anyone understand this sort of thinking, even remotely?

Definitions are important. A classic vaccine—the sort that made Jonas Salk a legend—is an attenuated (weakened) version of a virus. To call mRNA inoculation a “vaccine” when it is merely a spike protein wrapped up in a synthetic lipid is to borrow from the integrity of proven science to justify an unproven science. To put it less kindly, it is fraud.

And the fraud may be largely benign. As my customer proudly reported, effectively, “we were all fine; what’s your problem?”

Let me put it clearly, as I have tried to do before, you are asking your neighbors to participate in a potential death lottery. If I believe there is a seven in 202 chance my teenage boy might get life-ending myocarditis from the jab, your telling me “195 boys are perfectly fine” is not going to be of any comfort. If you want to take those odds for your family, that’s one thing, but may I keep my job, my social media platform, and my travel privileges if I say no? The next time a government-created super virus comes along, followed by a new experimental drug, are we going to have to repeat this drill again?

The conversation, these days, is made far more difficult by the human need to justify ourselves, even when our decisions begin to look imprudent in hindsight. We’ve all seen this sort of thing—the fitness freak who, post jab, finds himself hospitalized for heart issues yet who assures the entire world he would do it all over again, only to die a few days later. Likewise, those of us who refused the jab have to ponder whether our own “COVID dead” might have been helped by an mRNA jab. We don’t further science by insisting it conform to our own mistakes.

But that’s a deal that should cut both ways. A public health authority unwilling even to measure the dangers of vaccines, for fear of making the vaccinated feel bad about their decision, or to give false security to those considering vaccination, well, that’s many things: cowardice, stupidity, sloth, false compassion. It certainly isn’t “science.” It’s the very antithesis of science.

For those of you considering this, or future death lotteries, we should ponder all-cause mortality while we’re at it. From 1950 to 2019, American “all cause” mortality was pretty consistent, ranging between 0.83 percent and 0.97 percent. For the 21st century, it ranged between 0.79 percent and 0.85 percent. That’s something like going to a wedding with 120 guests and realizing, on average, one person would pass away during the next year. That’s about the level of death we’re accustomed to, and it stays very, very, very consistent. (It’s what makes life insurance possible.)

In 2021, with actual COVID deaths falling, that ratio went up to 1.026 percent. That may not sound like a lot, but it is enormous when compared to ordinary times, and some folks believe it’s far worse.

When we get around to finding out the cause, if we ever do, we simply can’t force our neighbors to accept our version of risk, and we can’t let past mistakes govern our future conclusions.

There can be no amnesty until someone at least admits they committed a crime.