Unvaccinated people develop much broader antibody immunity after being infected with COVID than people who have received the mRNA shots do, according to an NIH study. And the gap was large whether subjects had mild, moderate, or severe COVID infections.

The results of the study, which were highlighted by Alex Berenson on his Unreported Truths Substack, Daniel Horowitz at the Blaze, and Igor Chudov on his Substack newsletter, completely destroy the regime narrative that the shots provide stronger immunity than a natural infection, and may help explain why so many vaccinated Americans are now suffering from multiple COVID infections.

The pre-print paper was quietly posted by scientists from the National Institutes of Health and Moderna, and as Berenson noted, “it has received little attention despite its import.”

The study analyzed data from the Moderna Phase 3 vaccine trial comparing a vaccinated group with “breakthrough infections” to a control group of unvaccinated people with COVID.

Researchers wanted to find out if the vaccinated group acquired the same full-spectrum immunity as the unvaccinated. The answer was a resounding no.

“Researchers already knew that many vaccinated people do not gain antibodies to the entire coronavirus after they are infected with Covid, Berenson noted.

The study “all-but-proves” that the mRNA shots “are impeding the development of the anti-nucleocapsid antibodies,” Berenson reported. Because the coronavirus’s spike protein mutates rapidly, antibodies against it are eventually rendered useless. As Berenson noted, “Omicron’s spike is markedly different than that of earlier variants. The nucleocapsid protein mutates far more slowly, offering a potential second line of defense.”

But they then went a step further. Because the infected people had been in the trial, their viral loads had been precisely measured when they were found to have Covid. So the researchers were able to compare vaccinated and unvaccinated people who had the same amounts of virus in their blood.

Only in cases of severe infection and very high viral loads did the difference narrow significantly; in those cases all unvaccinated people and most of the vaccinated had anti-nucleocapsid antibodies.

In the chart below, the yellow line shows the odds that an unvaccinated person will develop anti-nucleocapsid antibodies to Sars-Cov-2, and the blue line shows the same odds for a person who received an mRNA shot.

According to Berenson’s analysis, an unvaccinated person has an almost 60 percent chance of developing antibodies with a mild infection, but a vaccinated person needs almost 100,000 times as much virus in his blood to do the same. 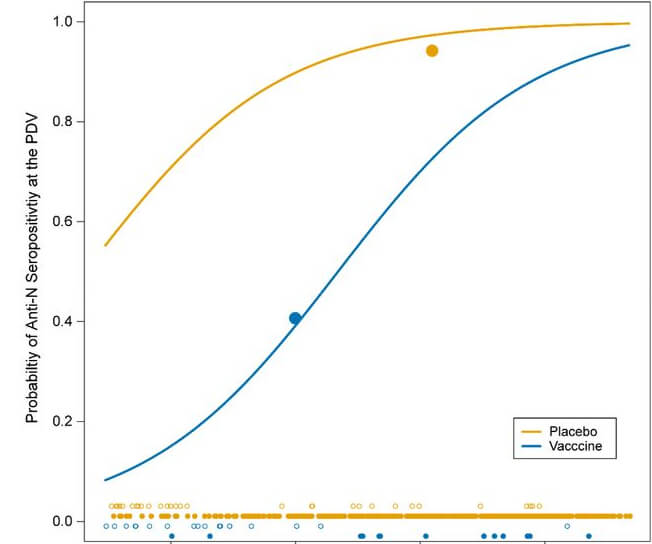 As Horowitz noted, none of this has stopped Pfizer from pushing a third dose of the injections for young children, even though:

There are now at least 1000 peer reviewed studies showing a multitude of serious adverse events In Covid-19 vaccine recipients.