After the 2020 election, government officials and their allies in the media repeated the mantra that the election was the “most secure in American history,” Dinesh D’Souza pointed out before the premiere of his new documentary film 2000 Mules at Mar-a-Lago, Wednesday night.

But how would they know that? D’Souza wondered. Even if they couldn’t prove the election was rigged, “it still doesn’t follow that it was the most secure election in history,” he said. “The only way you could prove that would be if you were to compare the amount of fraud in 2020 with 2016, with 2012, with 2008, with 2004, and show that there has been less fraud now than in any of those elections.”

D’Souza’s question is a good one.

Did election officials study the security of every election prior to 2020 to make the determination that the 2020 election was “the most secure ever”? Or were they just spinning another false narrative that benefits one side of the aisle?

Using state-of-the-art technology, the film convincingly makes the case that the 2020 presidential election was perhaps the most unsecure election ever, and was stolen from former President Trump.

This data, coupled with the surveillance video of the drop boxes, provide damning evidence of a coordinated illegal ballot trafficking operation across critical swing states.

“Without free and fair elections, we are not a democracy, we are a criminal cartel masquerading as a democracy,” D’Souza argues in the movie.

The research was spearheaded by True the Vote founder Catherine Engelbrecht, and former welfare reform and health and human services executive Gregg Phillips.

“The way that the ballots were collected becomes this multi-tentacled hydra. There’s all manner of ways that those ballots came in but the important take away is that dirty voter rolls allow for a big portion of this grift,” she explained in an interview last month.

Each trafficker—or mule—went to an average of 23 ballot drop boxes,” according to the researchers. The mules collected ballots from stash houses in the targeted areas and deposited them in drop boxes—often in the wee hours of the morning, from 1:00 to 5:00 a.m.

Over the course of several weeks, the vote traffickers made multiple trips to drop boxes using gloves to conceal their fingerprints, and taking photos to secure payment. D’Souza notes that the traffickers started wearing gloves a few days after a ballot harvesting case in Arizona secured indictments based on fingerprint evidence.

This is what stuffing the ballot box looks like pic.twitter.com/okpcKa9O4c

In the movie, True the Vote reveals that it also analyzed cell phone pings from some of the 2020 riots, and found that many of the Black Lives Matter and Antifa radicals who were involved in the riots went on to become ballot traffickers.

True the Vote estimates that 20 thousand votes were illegally trafficked in Arizona, 14 thousand in Wisconsin, 275 thousand in Pennsylvania, 125 thousand in Michigan, and 30 thousand in Georgia, totaling 380 thousand votes, which is more than enough to sway the election. Minus these illegal ballots, Trump’s Electoral College votes would have been 279 to Biden’s 259, D’Souza says.

The organization notes that these numbers are based on the definition of a mule as “at least 10 visits to drop boxes.”

” If the bar is lowered to count those making at least 5 visits, the estimated affected votes increases by more than double,” the group says.

D’Souza argues that their data is “systematic, comprehensive, and well-presented enough” to convince any “reasonable person.”

In remarks before the screening of 2000 Mules in a Mar-a-Lago ballroom, former President Trump stressed that the stolen election had dire ramifications for the nation. 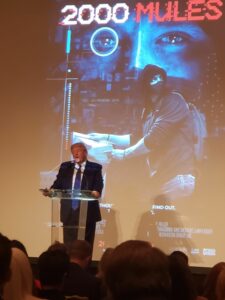 “We see terrible things happening,” Trump said, citing the unsecure border, inflation, and the botched withdrawal from Afghanistan as a few of the lamentable debacles the nation has seen since Biden took office. The former president argued that Putin decided to invade Ukraine after seeing “the incompetence and stupidity” of the Biden administration’s handling of Afghanistan.

Trump said none of the disasters would have happened had the election not been rigged.

There will be a virtual premiere of 2000 Mules online on Saturday, May 7, at 8 p.m. Eastern Time.

For the same price as a movie ticket you can watch “2000 Mules” at home. Sign up for our Virtual Premiere on Sat. May 7. It includes the screening of the movie with a live Q & A to follow. This event is limited to 250,000 people & tickets are going fast! https://t.co/GXmj2z4z0k pic.twitter.com/yewGoPwoDV