A new national poll shows that former President Donald Trump would beat Joe Biden 47 percent to 43 percent in a presidential match-up if the election were held today. Ten percent had no opinion.

When asked which party should control Congress, respondents said they preferred Republicans over Democrats 54 percent to 39 percent. Another 10 percent said they had no opinion.

Joe Biden remains underwater in his approval rating, with 43 percent of likely voters approving of his job performance, and 54 percent disapproving. Only three percent of respondents were undecided on this question. 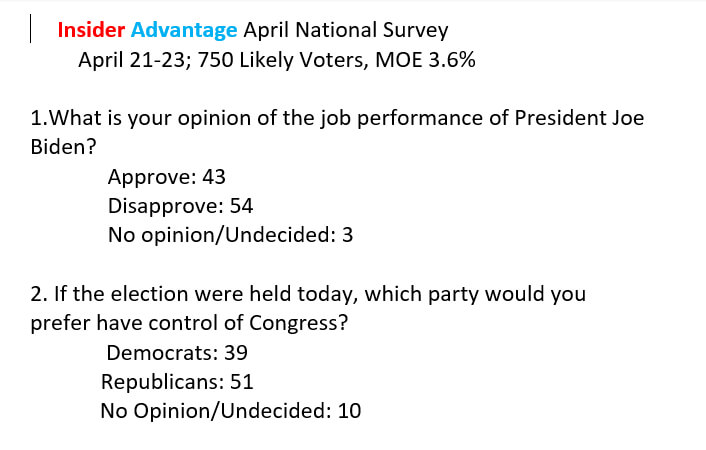 When asked if they supported the recent federal court decision declaring that the CDC exceeded its authority in requiring that masks be worn on airplanes, 45 percent of likely voters said they agreed with the decision, while 37 percent disagreed. Eighteen percent of the respondents had no opinion, or were undecided.

A week ago today, a federal judge in Florida struck down the Biden administration’s mask mandate for airplanes, buses, trains and other modes of public transportation, calling it “unlawful.”

In her 59-page ruling, U.S. District Judge Kathryn Kimball Mizelle determined that the mandate violated the Administrative Procedure Act by being outside the scope of the CDC’s authority, and by not going through the required notice and comment period for federal rulemaking.

The Biden DOJ on Tuesday vowed to appeal the ruling, saying in a statement: “The Department of Justice and the Centers for Disease Control and Prevention (CDC) disagree with the district court’s decision and will appeal subject to CDC’s conclusion that the order remains necessary for public health.”