Leaked Pfizer internal emails exposed by Project Veritas Wednesday night revealed that the drug company used fetal stem cells to develop its COVID-19 vaccine, and tried to hide that fact from the public, particularly Catholics who are bound by their faith to avoid products that violate church teaching on abortion.

Pfizer insider, Melissa Strickler discussed with Project Veritas founder James O’Keefe how corporate executives instructed staff to be secretive about the use of human fetal tissue in laboratory testing of the COVID vaccine.

The whistleblower works as a “quality auditor” for Pfizer, according to Project Veritas.

Pfizer’s Chief Scientific Officer, Philip Dormitzer, admitted in one email that aborted fetus tissue was used in the company’s vaccine program, but he told employees to stick with Pfizer’s PR talking points that failed to disclose the truth.

“HEK293T cells, used for the IVE assay, are ultimately derived from an aborted fetus,” Dormitzer wrote. “On the other hand, the Vatican doctrinal committee has confirmed that they consider it acceptable for Pro-Life believers to be immunized. Pfizer’s official statement couches the answer well and is what should be provided in response to an outside inquiry.”

Vanessa Gelman, who serves as Pfizer’s Senior Director of Worldwide Research, urged staff to avoid talking about the human fetal cells in the company’s vaccine program.

“From the perspective of corporate affairs, we want to avoid having the information on fetal cells floating out there,” Gelman said.

“The risk of communicating this right now outweighs any potential benefit we could see, particularly with general members of the public who may take this information and use it in ways we may not want out there. We have not received any questions from policy makers or media on this issue in the last few weeks, so we want to avoid raising this if possible,” she said.

Gelman stressed the importance of being secretive about this information in another email thread.

“We have been trying as much as possible to not mention the fetal cell lines…One or more cell lines with an origin that can be traced back to human fetal tissue has been used in laboratory tests associated with the vaccine program,” she wrote. 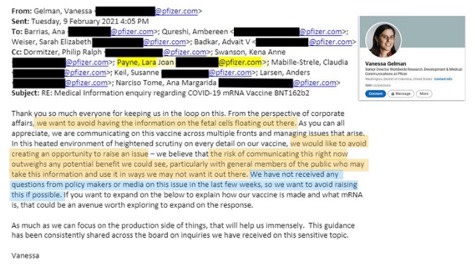 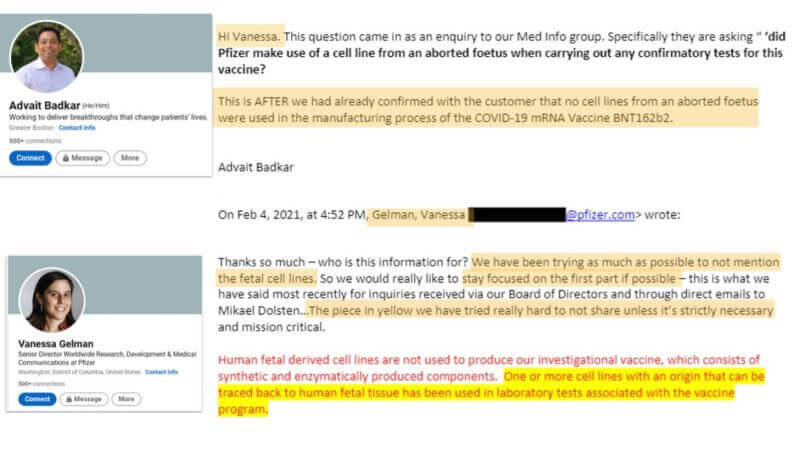 Strickler told O’Keefe she was not sure whether aborted fetal tissue made it to the final COVID vaccine product.

“They’re being so deceptive in their emails, it’s almost like it is in the final vaccine. It just made me not trust it,” she said.

She added that Project Veritas was the only place she could go to safely tell her story.

“I have no one else to turn to when my own company won’t be honest with me. What I was told to do was to trust Project Veritas and to go with you guys by lawmakers, by lawyers,” she said.

‘We Want to Avoid Having the Information on the Fetal Cells Floating Out There’#PfizerLeaks pic.twitter.com/Mw2enOejsF

This information is of monumental importance to Americans who are seeking a religious exemption to avoid getting the jab.

And it is likely devastating to pro-life people throughout the world, especially priests and nuns, who “trusted the science” and submitted to the demand that they “do the right thing,” and get vaccinated.