By casting conditional votes for Trump, the GOP electors have set up an epic showdown in a joint session of Congress next month when lawmakers convene to count the electoral votes and officially declare the winner.

GOP Electors in Michigan also attempted to cast conditional votes for the president and vice president, but were blocked by state police from doing so.

While Wisconsin’s Democratic electors met and cast ballots, Republican electors met too. State GOP chairman said to “preserve our role in the electoral process with the final outcomes still pending in the courts.” pic.twitter.com/3xDkW9kPVJ

The Wisconsin Supreme Court on Monday ruled against President Trump’s challenge regarding the status of “indefinitely confined”  because the president sought to have all votes cast under that status tossed out.  The court said the tossing ballots must be made on a case-by-case basis.

In a separate ruling, however, the court ruled that election officials were wrong to ordain that all voters could claim special status because of Covid-19, and voters who falsely claimed to be indefinitely confined may have their ballots tossed. In other words, the status of any questionable votes must be made on a case-by-case basis.

According to Milwaukee Journal-Sentinel, State Rep. Hitt said in a statement that the Wis. electors met “to preserve our role in the electoral process while the final outcome is still pending in the courts.”

David Shafer, chairman of the Republican Party in Georgia said in a statement Monday that Georgia Republicans met at the State Capitol today to vote for President Trump to preserve the president’s rights under Georgia law.

Had we not meet today and cast our votes, the President’s pending election contest would have been effectively mooted. Our action today preserves his rights under Georgia law.

And in Pennsylvania, Republican Electors also cast a procedural vote for the president and vice president.

Republicans in New Mexico also took a stand for President Trump on Monday, by casting ballots for the president and vice president amid Trump’s legal team’s new lawsuit in the state.

In Michigan, Democrat Governor  Gretchen Whitmer sent state police and 200+ troops to block Republican electors from entering the capitol building today to perform their constitutional duty. “Our Capitol is totally closed and locked down, away from the rest of the people,” said one of the Michigan Representatives outside of the Capitol building in Lansing.

They said that they were the Republican electors there to cast their vote for president. State police declined to let them enter the building or leave votes offered in a manila envelope pic.twitter.com/rNVIwc5ZXC

MI Attorney General is threatening legislators w criminal investigation and possible prosecution if they disagree with her, and the MI Governor and other officials are shutting down the peoples’ house and preventing them from gathering today to perform their constitutional duty.

Today, Trump electors, from the state of Michigan, were denied entry to the Michigan State Capitol after Governor Whitmer and other officials sent 200+ troops to guard the building.

“Our Capitol is totally closed and locked down, away from the rest of the people.” One of the Michigan Representatives speaks about today’s Capitol closure surrounding the Electoral College vote #Michigan #Electors #ElectoralCollege #ElectoralCollegeVote pic.twitter.com/hI8X2kxhAW

“They’re being stopped from fulfilling their constitutional duty.” Ian Northon, an attorney with The Amistad Project, discusses the GOP electors presence at the Capitol today and being blocked from getting inside #Michigan #GaryEisen #ElectoralCollege #ElectoralCollegeVote pic.twitter.com/LUiAMde0qm

“Our Republican Electors felt that they needed to be seated today, too” Republican Representative from Michigan speaks out about sending a second slate of Electors while the vote is investigated #Michigan #ElectoralCollege #ElectoralCollegeVote pic.twitter.com/An56ZvLjCj

A spokeswoman for MI Senate Majority Leader Mike Shirkey, R-Clarklake, said the Senate closed its facilities for Monday “based on recommendations from law enforcement.”
“The decision was not made because of anticipated protests, but based on credible threats of violence,” spokeswoman Amber McCann said late Sunday.
Gideon D’Assandro, a spokesman for House Speaker Lee Chatfield, R-Levering, refused to specify the potential threat.
“I can’t get into the nature of the concern,” D’Assandro said. “Have to refer you to the Michigan State Police (MSP) on that.”But Michigan State Police spokeswoman Shanon Banner reportedly said the MSP did not make the decision to close the office buildings and referred a reporter back to the Legislature.

“Like tyrannical kings of old dissolving lawful parliaments, governors in these contested states have declared themselves to be the law, and are actively preventing the state legislatures from exercising their constitutional authority over the final certification process,” said Phill Klein, former Attorney General of Kansas, now Director of the Amistad Project of the Thomas More Society.

Alabama Congressman Mo Brooks has been arguing that it will be up to Congress to determine who will be the next President of the United States.

On January 6, members of Congress will convene to count the electoral votes and officially declare the winner. The joint session also allows members to object to returns. Challenges similar to the one proposed by Brooks took place in 1969, 2001, 2005 and 2017.

Brooks has met with Senator Mike Lee (R-Utah) and separately with the House Freedom Caucus to discuss a potential challenge of the election results.

To lodge a challenge, Brooks said he will need a senator to join him. The New York Times said Senators Ron Johnson of Wisconsin and Rand Paul of Kentucky have signaled they would be open to doing so.

Once an objection is heard from a member of each house of Congress, senators and representatives hold a two-hour debate before voting on whether to disqualify a state’s votes. Both houses of Congress would have to agree to reject a state’s results.

According to Women for Trump 2020 advisory board member Meshawn Maddock, the GOP electors in Michigan were eventually able to convene and cast their votes for the president and vice president.

-I confirmed directly with @meshawnmaria that GOP Electors in MI cast their ballots for @realDonaldTrump.

-This, despite the attempts by some to stop them.

“Sending more than one slate of electors is not unheard of,” said Maddock. “It’s our duty to the people of Michigan and to the U.S. Constitution to send another slate of electors if the election is in controversy or dispute—and clearly it is.”

Electors in Louisiana also certified their votes Monday for the president and vice president.

Louisiana’s eight Presidential Electors convened in the Louisiana Senate chambers yesterday afternoon to cast their votes in the Electoral College for President Donald Trump and Vice President Mike Pence. The 1,225,776 votes cast for President Trump is the largest total that any candidate for any office in Louisiana has ever received!

The eight Electors voted unanimously for the Republican presidential ticket as well as resolutions defending the Constitution and commending Donald Trump for his accomplishments. 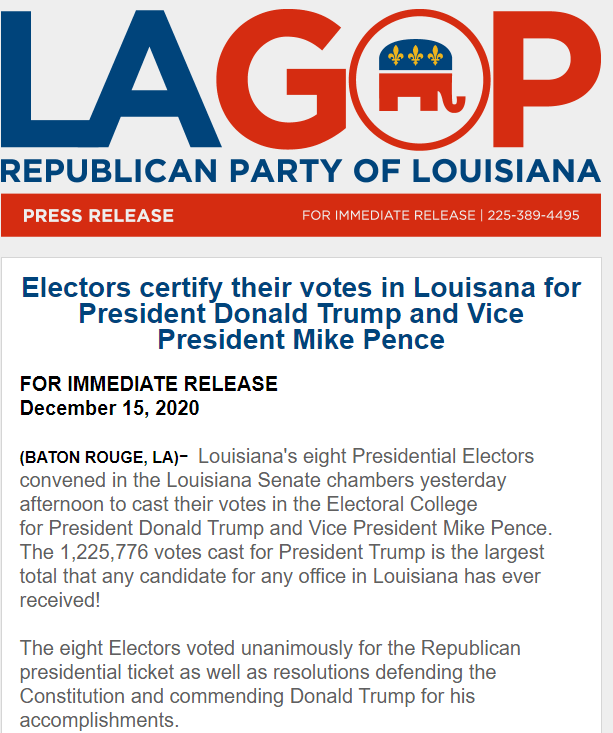