Seventeen U.S. states filed a brief at the U.S. Supreme Court on Wednesday supporting the Texas lawsuit challenging the 2020 election results. [Arizona has now filed a brief in support of the lawsuit bringing the number of states to 18. Seen update below].

“In the context of a Presidential election, state actions implicate a uniquely important national interest, because the impact of the votes cast in each State is affected by the votes cast for the various candidates in other States,” the brief states. “For the President and the Vice President of the United States are the only elected officials who represent all the voters in the Nation.”

The allegations in the Bill of Complaint raise important constitutional issues under the Electors Clause of Article II, § 1. They also raise serious concerns relating to election integrity and public confidence in elections. These are questions of great public importance that warrant this Court’s attention. The Court should grant the Plaintiff’s Motion for
Leave to File Bill of Complaint.

As American Greatness’ Julie Kelly reported on Tuesday, the Texas lawsuit “accuses four states currently ‘won’ by Joe Biden of using the COVID-19 pandemic as an excuse to violate the Electors Clause and the 14th Amendment.”

The state of Texas is asking the court to extend the December 14, 2020 deadline to certify each state’s electoral slate.

The suit also asks the court to declare that the four states—Pennsylvania, Georgia, Michigan, and Wisconsin—“administered the 2020 presidential election in violation of the Electors Clause and the Fourteenth Amendment” and to block the Electoral College votes of those states.

“This is the big one,” President Trump said of the Texas suit.

We will be INTERVENING in the Texas (plus many other states) case. This is the big one. Our Country needs a victory!

In a tweet this morning, Missouri’s Attorney General Eric Schmitt said that he would lead the effort in support of the Texas lawsuit.

Election integrity is central to our republic. And I will defend it at every turn.

As I have in other cases – I will help lead the effort in support of Texas’ #SCOTUS filing today.

Missouri is in the fight. https://t.co/V3aLHrYnOF

Late Wednesday afternoon, the Trump Campaign put out a statement saying that the president himself will intervene in the case. 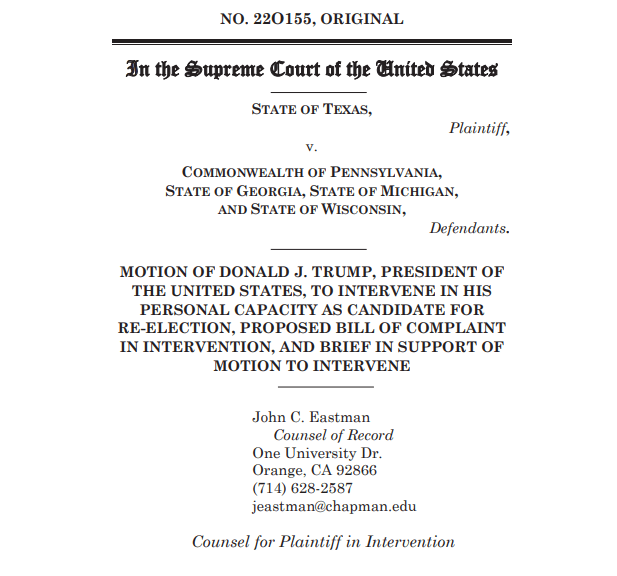 “Donald J. Trump, in his personal capacity as candidate for re-election as President of the United States, today moved to intervene in the Texas v. Pennsylvania, et. al. action at the United States Supreme Court,” the campaign said in a press release. “The President intervened because his rights as a candidate are affected by the Defendant States’ failure to follow and enforce state election laws during the 2020 election.”

The president has asked John C. Eastman, Counsel of Record for President Trump, to represent him.

“I’m honored that the President asked me to represent him in this matter,” said Eastman. “I think his intervention in this case strengthens an already very strong original action by the state of Texas.”

Jenna Ellis, Senior Legal Adviser to the Trump 2020 Campaign, said in a statement: “President Trump is fully committed to ensuring election integrity and fulfilling his oath to defend and protect the United States Constitution against state officials’ misconduct and violations of law that irredeemably compromised this election. We look forward to the Supreme Court resolving these important issues of election integrity that ultimately affect all Americans, and providing a remedy to the corruption that occurred.”

Arizona Attorney General Mark Brnovich on Wednesday filed a brief with the Supreme Court, saying “our filing ensures Arizona’s interests are protected” in a statement posted on Twitter:

Our Office has received many inquiries about the Texas v. Pennsylvania lawsuit filed at the U.S. Supreme Court and whether Arizona will participate. Here is my statement and our legal filing: https://t.co/82qIu1lQ5B pic.twitter.com/tRY6c6lTJl

President Trump voiced his support for the effort on Twitter.

“Wow! At least 17 States have joined Texas in the extraordinary case against the greatest Election Fraud in the history of the United States. Thank you!” the president tweeted.

Wow! At least 17 States have joined Texas in the extraordinary case against the greatest Election Fraud in the history of the United States. Thank you!

Jordan Sekulow, the Executive Director at the American Center for Law & Justice, joined Newsmax Wednesday to explain what is happening with the Texas lawsuit.