“Sauron’s wrath will be terrible, his retribution swift. The battle for Helm’s Deep is over, the battle for Middle Earth has begun.”

When applied to American politics and public policy, this quote from one of Peter Jackson’s film adaptations of J.R.R. Tolkien’s classic Lord of the Rings novel succeeds as a metaphor in two related contexts. First, it might describe the 2016 election, where the good guys won, just as they did in the Battle of Helm’s Deep. Now the relentless assaults by the deep state and its formidable lineup of violent activists and their allies in the press and in both political parties (Sauron’s minions) march against the Trump Administration and its supporters in the War for Middle Earth.

But there is another more specific way to view this metaphor. The Battle for Helm’s Deep represents the battle for voters in America’s cities, and the Battle for Middle Earth represents the battle for voters in America’s suburbs. Only in this case, the good guys lost the first battle. America’s cities are lost to the forces of Mordor. The following image graphically depicts just how thoroughly the Uruk Hai dominate America’s cities, controlling elections at the same time as they destroy the schools, dismantle law and order, and allow the overall quality of life to deteriorate. 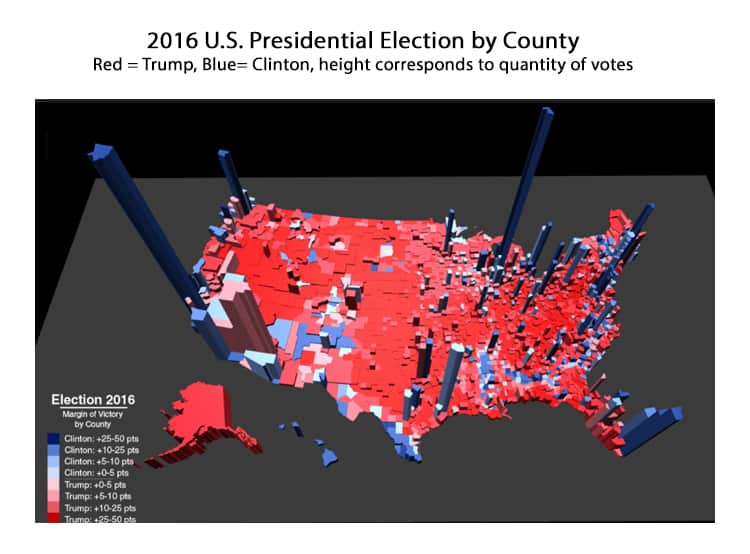 Where there is still hope, but where hope is fading fast, is in what could be the ultimate battle for America’s suburbs. If Sauron’s army—Orcs, along with Saruman’s victorious Uruk Hai, joined by the Men of Harad, the Variags of Khand, Easterlings from Rhun, the Corsairs of Umbar, and Trolls, Half-trolls, Wargs, Mumakil, and Nazgûl—is not stopped, suburban life will become unrecognizable.

To dispense with metaphors, consider the fell alliance of forces pouring out of America’s cities and threatening America’s suburbs in their actual incarnations: Democrats, politically connected developers, opportunistic and predatory investors, Big Tech billionaires, the environmentalist lobby, plaintiff attorneys, the entirety of academia and the leftist think tank network, nearly all of the media, a significant cadre of useful idiot libertarians, public-sector unions, most private-sector unions, and all of these backed by armies of bamboozled or bought off activists claiming to fight in the interest of everything from the disadvantaged victims of systemic racism to the urgent need to save the earth from capitalism-induced catastrophic climate change.

No wonder Osgiliath was not held. Man the battlements of Minas Tirith. Pray for deliverance.

What is going to happen to America’s suburbs is not pretty to contemplate. As usual, California is ground zero for the progressive assault on suburbia. The plan, in California and elsewhere, is to cordon off all developed land, restricting population growth to within the footprint of existing cities and suburbs. According to this plan, the single family home is an abomination.

The theory goes something like this: Suburbs were built for privileged, economically advantaged whites to abandon the cities to minorities, taking away the tax base from the inner city, and this explains the failing schools and shattered communities. At the same time, these sprawling suburbs became an unsustainable assault on the planet, consuming precious and finite open space and causing monstrous quantities of commuter-induced greenhouse gas emissions.

There is barely a shred of truth to any of this. The idea that higher urban densities are necessary to protect open space is a preposterous delusion, insofar as less than 5 percent of the United States is urbanized. And even if you believe automotive greenhouse gas emissions are an environmental threat, cars are becoming emissions-free, jobs tend to migrate to where people live, and telecommuting—as the pandemic has proven—is more feasible than ever.

Inclusive zoning ideology relies on equally preposterous assumptions. It is based on the premise that if disadvantaged people, low-income people—even those struggling with mental illness or substance addictions—are brought into an affluent neighborhood, the habits and attitudes of the affluent residents will be absorbed by these less fortunate individuals, and “foster greater social and economic mobility and integration.”

This, of course, is an absolute crock, but the underlying motivations—scarcely understood by most of the proponents—are deeply sinister.

The ideology underlying inclusive zoning is explicitly Communist. It demands that everyone has a right to live anywhere they want, and that private property ownership is not earned by hard work, but rather is a manifestation of privilege and oppression. It is only a great irony that this seductive siren call is a useful tool in the hands of political cronies and profiteers if you ignore their shared goal: centralization of power and control.

For example, inclusive zoning, stripped of the high-minded leftist rhetoric, includes the practice of redistributing poverty to make certain neighborhoods blighted and low income. Once that’s accomplished, developers working closely with the city bureaucrats can use major federal financing incentives and eminent domain to completely demolish previously intact neighborhoods where residents invested their lives and fortunes to call home.

But in all cases, inclusive zoning is a destructive force that masquerades as a prerequisite for social justice, but instead merely empowers opportunistic investors.

Laws being written across America by progressives are rezoning neighborhoods to make single-family dwellings worth more if they are demolished to construct rent-subsidized fourplexes than if they are left standing. And wherever low income American’s from the inner cities have failed to fill the vacancies for these rent subsidized suburban multi-family units, expect “climate refugees” to arrive from abroad, further enriching subsidized developers and investors.

Why are progressives enablers of institutional investors?

Often these investors are global hedge funds that swoop into neighborhoods as soon as there’s any downturn in the real estate market. Unlike individual small landlords, these investment firms don’t care if renters pay using Section 8 vouchers—in fact, it is a plus if they do. It is a guaranteed revenue stream and once a critical mass of subsidized renters occupies the neighborhood, the property values crash, which allows them to expand their holdings.

Inclusive zoning will not solve the challenges facing residents of the inner city. The only way to do that is to break up the teachers union monopoly on K-12 education, reassert law and order, and nurture a cultural renaissance that values two-parent families, reveres education, and respects hard work. Absent those transformations, inclusive zoning will not save the residents of the inner city, it will just export the inner city into every suddenly crowded suburb in America. Thankfully, many conservatives are at last recognizing the centrality of these issues.

New Voices Are Speaking Out to Save America’s Suburbs

In late June, writing for the National Review, Stanley Kurtz warned readers that “Biden and Dems Are Set to Abolish the Suburbs.” As he put it, “Biden and his party have embraced yet another dream of the radical Left: a federal takeover, transformation, and de facto urbanization of America’s suburbs.”

Kurtz makes the point that suburbs are the swing constituency in U.S. national elections. He points out, perhaps optimistically, that if suburban voters understood what’s coming, they’d vote Republican. On July 15 he elaborated in another National Review article titled, “Will Biden’s War on the Suburbs Become a Campaign Issue?” We may hope. Or maybe the powerful rhetoric of density ideology and inclusive zoning will create a powerful enough smokescreen to prevent voter enlightenment until it’s too late.

The Affirmatively Furthering Fair Housing regulation, AFFH for short, is like Affirmative Action for community planning, with three elements:

1) Use a kind of quota system to force “economic integration” on the suburbs, pushing urban residents outside of the city.

2) Close down suburban growth by regulating development, restricting automobile use, and limiting highway growth and repair, thus forcing would-be suburbanites back to the city.

3) Use state and federal laws to force suburbs to redistribute tax revenue to poorer cities in their greater metropolitan region.

Putting federal teeth into laws that are already being enacted by progressive states and cities would spell the end of suburban life in America. The consequences will be beneficial neither to the disadvantaged nor to the planet. What Americans need from their policymakers are laws that will facilitate suburban expansion and deregulation of housing and infrastructure development. This will lower the cost of housing as well as the overall cost-of-living.

There is an alternative, and along with exposing the war on suburbs, that alternative must be clearly communicated and the fight engaged. Here are some highlights of what might constitute that alternative political agenda.

These reforms would create new, affordable suburban frontiers for hard working families to aspire to live in; while cultural shifts as previously described—embracing the values of family, hard work, education, and law and order—offer the only honest hope for struggling inner city communities.

Also necessary is a broader cultural shift across America. One that reasserts some of the following principles:

And the moral argument for these principles:

It is not too late to save America’s suburbs, and by extension, America itself.

To return to the Tolkien allegory, perhaps these words from Lord Aragorn describe this time we’re living in quite well. Let them inspire us all:

“I see in your eyes the same fear that would take the heart of me.

A day may come when the courage of men fails, when we forsake our friends, and break all bonds of fellowship, but it is not this day.

An hour of wolves and shattered shields, when the age of men comes crashing down, but it is not this day! This day we fight!!

By all that you hold dear on this good Earth, I bid you stand, Men of the West!!!”