The weak Democrat leaders of Seattle have surrendered to the antifa mob, boarding up a police facility, allowing unruly radicals to flood a city council building, and even take over a large section of the city.

Hundreds of far-left agitators and at least one City Council member stormed Seattle’s City Hall Tuesday night to demand the mayor’s resignation if she refuses to defund the city’s police department.

Councilwoman Kshama Sawant reportedly helped the agitators get inside the building.

Councilmember Sawant has a key to City Hall, allowing protesters to enter and chant for the mayor’s removal. #seattleprotest pic.twitter.com/EyC7GdT4Xh

Hundreds of far-left protesters swarmed inside Seattle City Hall to demand the ousting of the mayor. #COVID19 #SeattleRiot pic.twitter.com/kdNcLqWyZu

Antifa extremists in the city recently seized a six-block area in the Capitol Hill section of downtown Seattle that now includes an abandoned police precinct, calling the commune the “Capitol Hill Autonomous Zone” or “CHAZ.”

Antifa Attempts to Set Up “Autonomous Zone” in Seattlehttps://t.co/CmoRp0rBiC

Protesters have put on the barricades that those coming into the area are “now leaving the USA” and entering the “Cap Hill autonomous zone” or “Free Capitol Hill.” pic.twitter.com/zGNBYAyLOg

Seattle #antifa extremists have occupied the Capitol Hill area in Seattle & turned it into a no-go zone. They have their people patrolling the barriers they set up. Local news crew was chased out. They had to seek refuge in fire station. pic.twitter.com/CLM08tJFFj

“When antifa can’t achieve a full revolution, they take over a small area in leftist cities to carry out their utopian commune experiment,” independent journalist Andy Ngo explained on Twitter. “It ends in neighborhoods being destroyed & occupiers forcibly dispersed because of health hazards. They leave the filth behind for others.”

Below are some of the demented figures inhabiting Seattle’s “autonomous zone.”

Nicholas James Armstrong/Nikki Jameson was seen last night at the #antifa “commune” in Seattle harassing a local media crew. She is a transsexual antifa militant & sex worker. She was previously ordered to surrender all firearms & is barred from owning dangerous weapons. pic.twitter.com/rKDPlx8no2

This is one of the individuals running the "Capitol Hill Autonomous Zone" in Seattle. No additional commentary from me needed, lol pic.twitter.com/eDYfFQOQLU

The above antifa account put out a request on Twitter for more food , including vegan meat substitutes, fruits, oats and soy after the homeless people they invited to their commune stole their supplies. 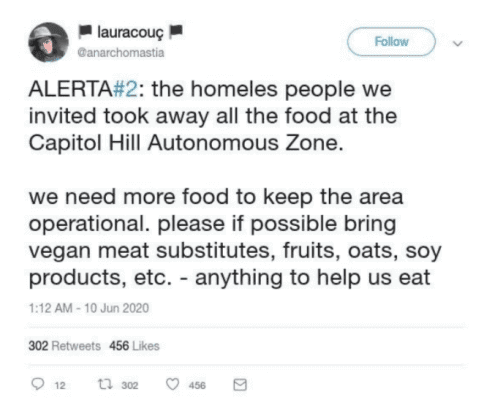 A seattle-based antifa group put out a request on Twitter for “more people with guns” to patrol “CHAZ.”

Like many other cities, Seattle saw violent riots following the death of George Floyd, the unarmed career criminal who died at the hands of Minneapolis police.

For nearly two weeks, antifa-fueled mobs in Seattle clashed with the police, throwing glass bottled, rocks and other projectiles at officers. The police responded with pepper spray and tear gas to break up violent rioters.

The riots and looting destroyed many businesses in downtown Seattle, including those owned by minorities in the Chinatown/International District, according to the Post Millennial.

Even though Mayor Jenny Durkan handicapped the city’s police force on Friday by banning the use of tear gas against the violent mob, the agitators were not satisfied.

On Tuesday, they released a long list of demands that included abolishing the police and “youth jails,” as well as “reparations for victims of police brutality,” and “a retrial of all People in Color currently serving a prison sentence for violent crime, by a jury of their peers in their community,” and assorted free stuff. The entire list can be seen here.

According to Fox News, Seattle Police responded to the radicals by rolling back “aggressive policing tactics,” saying they will only enter antifa’s “autonomous zone” if there is a 911 call for an emergency.

In an effort to “de-escalate,” police on Monday removed the barricade that protected the East Precinct facility from violent demonstrators.

During a press briefing, Police Chief Carmen Best said Seattle Police explained that demonstrators would now be able to walk freely around Capitol Hill. “We’re not going to evacuate or abandon the East Precinct,” she said. “We will be hardening the East Precinct facility by boarding up the exterior windows, and applying fire retardant to the building exterior and installing fencing.”

In June of 2018, an anti-ICE Autonomous zone in Portland Oregon was allowed stand for five weeks, becoming a biohazard with intravaneous drug abusers and masked agitators terrorizing local residents and businesses. Tax payers ended up footing the bill for the extensive clean-up after they were finally driven out.

The Seattle east police precinct has been entirely boarded up. Traffic in & out of the zone is controlled by the anarchists & communists. Militants are calling this their commune. Police are ordered away. https://t.co/yWTqGrSwIz pic.twitter.com/rBwocYh0Dl

In response to the demonstrations Tuesday night, Durkan’s office said in a statement that she remains committed to making “actual steps on policing” and other measures of reform.

“As the person who originally investigated the Seattle Police Department for the unconstitutional use of force, Mayor Durkan believes that SPD can lead the nation on continued reforms and accountability, but knows this week has eroded trust at a time when trust is most crucial,” the statement said.