For decades, California’s aristocracy has engaged in unsustainable feasting, as they consume the leviathan carcasses of what were for a time the world’s finest water project, freeway system, and public universities. Living off a capital endowment that once provided abundance, the aristocrats of California have neglected all of these achievements, imposing scarcity on a quiescent populace instead.

California’s aristocrats get wealthier as they ration supplies of every necessity, from housing to water and energy. The money they should have invested in maintaining affordable abundance goes instead into pay and pensions for their armies of usefully co-opted, unionized public servants, and entitlements for a growing underclass that votes reliably Democrat.

By now California’s so-called “up-down coalition” of Democratic voters has enabled its ruling class to acquire absolute power. Meanwhile, California’s beleaguered middle class either flees to other states or continues to vote against their own interests because they think it will demonstrate their commitment to the twin gods of “diversity” and fighting climate change. And as the old adage goes: power corrupts, and absolute power corrupts absolutely.

California’s political economy today is set up to reward the wealthiest political insiders and destroy the hardest working middle-income citizens, all while expanding the ranks of the lowest-income residents and pandering to them by pretending to care about wealth inequality, social “equity,” and “environmental justice.” This explains the status of California as a sanctuary state. It also explains California’s burgeoning, unaccountable homeless population.

These deplorable social conditions, as well as the neglected infrastructure in California, easily could be managed, but then there would be no reason to expand the unionized state, no reason to drive down private sector wages while elevating public sector wages and benefits, and fewer opportunities for the wealthiest Californians to profit from asset bubbles. This is textbook political corruption. California is a one-party banana republic, run by a plutocracy that is looting the people’s inheritance to further enrich themselves.

The Hotel California Is Now Open on Venice Beach

The Venice Beach homeless “bridge housing” complex was opened for occupancy in February. It is a prime example of how crony capitalist corruption hides behind the mask of social justice and “inclusion.” This shelter is situated two blocks from the beach, on a three-acre parcel where land is valued at $30 million per acre. This city-owned land could be sold, and the proceeds could be used for shelter housing in far less expensive parts of Los Angeles County.

Instead, 154 homeless individuals are now occupying a “temporary” shelter that cost $8 million to construct and will cost another $8 million a year to operate. Eventually, supposedly within three years, “permanent supportive housing” will be constructed on-site for these homeless—or as they are called now, the “unhoused”—so they can continue to live two blocks from the beaches of the Pacific on one of the most expensive pieces of real estate on earth.

This is an example of “inclusive zoning” at its most extreme. It is based on the premise that if disadvantaged people, low-income people—even those struggling with mental illness or substance addictions—are brought into an affluent neighborhood, the habits and attitudes of the affluent residents will be absorbed by these less fortunate individuals, and “foster greater social and economic mobility and integration.”

The entire affordable housing policy agenda, enshrined in zoning regulations and tax incentives across America and especially in California, is susceptible to corruption. Why develop market housing, when you can get tax credits and tax exemptions if you instead build subsidized “affordable” housing? In California, the government implemented regulations and fees so punitive that they effectively rationed housing for all but the very wealthy, and now they are soaking the taxpayers to subsidize “affordable housing” at an average cost of more than $600,000 per unit. But why seed the most expensive parts of California’s cities with homeless shelters at a cost of over $50,000 per bed?

Here is where we could be seeing corruption disguised as compassion at its worst because the easiest way to acquire tax subsidies and tax credits is if an area can be officially declared “blighted.” Once this label applies to any census tract, not only do the federal money coffers automatically open wide for redevelopment, but the local cities can declare eminent domain to force homeowners to sell their homes which are then demolished to make way for hotels, hospitals, shopping malls, and residential high-rises—all of which offer more to these cities by way of taxes.

It doesn’t take much to tip the balance in a census tract to a “blighted” status, and it takes even less to earn a score that qualifies the area for less draconian but still very lucrative tax credits and subsidies. It is based on three variables, average median income, rate of unemployment, and rate of poverty. Take a look at this map of the coastline of West Los Angeles. The census tracts are outlined with yellow lines; some of them are only a half-mile in area, only a few hundred acres in size. 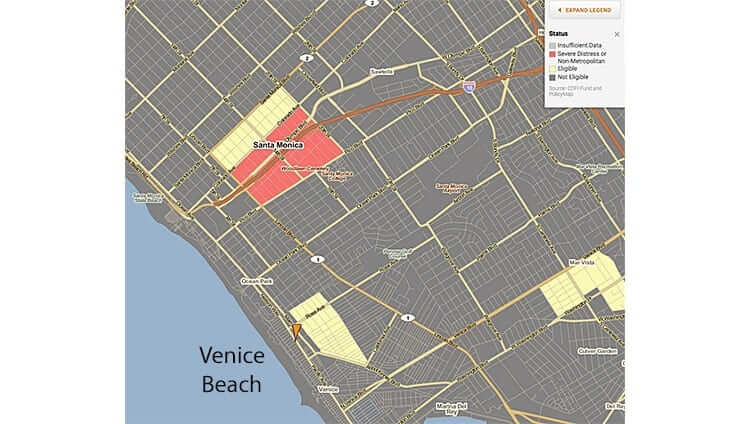 Notice that large parts of Venice Beach are already shaded yellow, meaning they are “eligible” for tax incentives based on “blight.” Flip that shade from yellow to red, as has happened in Santa Monica to the immediate north, and even more tax incentives arrive. How many people with perfect scores for “blight” would it take to transform these areas?

Don’t Walk Your Dog After Dark in Venice Beach

The homeless in Venice Beach have been a growing menace to law-abiding, hard-working residents for years. The problem has become considerably worse in just the past year, but if you object to the presence of people smoking methamphetamine and defecating on the sidewalk in front of your home or business, apparently that means you’re a fascist, a social Darwinist, and a sociopath. Never mind the fact that you and your spouse may both be working overtime to pay a mortgage, or that you have young children you want to keep safe.

Now that the Hotel California “bridge housing” is officially opened up, a new breed of homeless has arrived on the scene. As if the nonstop distribution of shit on Venice’s sidewalks and syringes on the local lawns wasn’t bad enough, eyewitness accounts offer lurid details of local women now being aggressively followed and harassed by gangs of young men who correctly identified this new “shelter” as a place where they can get free meals and free overnight accommodations.

Common sense would suggest that if the civic authorities had the slightest respect for the residents, this shelter would have a curfew, and would not admit intoxicated individuals. But the opposite is the case. Out of respect for the human rights and dignity of the “unhoused,” Venice Beach’s Hotel California is a “wet” shelter, meaning that any time of day or night you can stagger in as stoned or smashed as you wish, get some sleep or a free meal, then leave again.

Exactly how is something like this not expected to attract even more of the “unhoused” to make Venice Beach their free home? They have everything they need—free food, free shelter, freedom of movement, “tolerance” of their “lifestyle,” and no accountability. But in a census tract of only a few blocks, a facility of 150 people without jobs (perfect score on “unemployment rate”), without income (ditto), and clearly living in poverty, watch out. Blight, and with that, eminent domain by the City of Los Angeles, could swiftly follow.

Inclusive zoning, California style, includes the practice of redistributing poverty to make certain neighborhoods blighted and low income, so that developers, working closely with the city bureaucrats, can use major federal financing incentives and eminent domain to completely demolish previously intact neighborhoods where residents invested their lives and fortunes to call home.

The ideal underlying inclusive zoning is overtly Communist. It suggests that everyone has a right to live anywhere they want, and that private property rights are a manifestation of privilege and oppression as much as of hard work. What great irony that this seductive siren call is a useful tool in the hands of political cronies and profiteers.