A new school year is kicking off for millions of young Americans and, with an election year looming, expect heaps of new assignments meant to “explore public issues.” In thousands of schools throughout the United States, this will mean further political indoctrination by their mostly left-leaning teachers.

No doubt they will be taught about the “racial income gap” in the United States. Most teachers will suggest that the right remedy would be to enact progressive liberal reparations for approved “victim” groups at the expense of “oppressors.” But to accomplish this, it will be necessary first to scapegoat. And the ones being scapegoated —unsurprisingly—will be white men and their sons sitting in the classrooms.

Your kids will most likely read “objective” articles like this one from Time, which states matter-of-factly, “Nationally, black women earn 61 cents for every dollar earned by white men . . . one 2017 study shows that over a 40-year career, women overall lose $418,800 as a result of the wage gap, with women of color losing almost $870,000.”

Lost to whom? Non-Hispanic white men, evidently. Or, if they are teachers like me, they can sit through “professional development” lectures about these “pay gaps” conducted by liberal females, most of whom are white and typically make over $100,000 a year.

That’s what I got to do for five hours over two days recently, along with hundreds of other teachers from schools throughout my state. I work and teach while my white liberal administrators opine about all the “systems” that hold down our underachieving students.

Then, they can use a lesson from the Southern Poverty Law Center’s so-called “Teaching Tolerance” curriculum which encourages high school teachers to play a “racial monopoly” game to “get a glimpse of the long-term economic effects of race-based policies that have limited the economic opportunities of African Americans, Native Americans, and other communities of color” vis-à-vis their supposedly “privileged” white neighbors. “Teaching Tolerance” sends its material every year to more than 400,000 teachers around the United States.

In psychology, when an outnumbered individual is singled out and blamed for issues that are neither his fault nor within his power to solve, it’s called scapegoating. In progressive liberal America, it’s called social justice.

Of course, the statistics are accurate. But in your children’s schools, they will be presented apart from any information that might add further understanding of the “issue” being highlighted. It is doubtful your kids will be asked to consider the probable causes of these outcomes beneath the superficial context of “racism” and “discrimination” that, seemingly, explain all negative outcomes in America.

Teachers will pay no mind to the numerous individual choices that play into one’s future earning potential. Here is a shortlist of those choices: Did you get expelled from school? Commit a felony? Use drugs? Have children out of wedlock? Were your parents married when you were born? What is your IQ? Do you go to church? Are you married? How tall are you? Are you fat? Skinny? What proportion of your money do you spend on necessities? What proportion do you spend on luxury items?

If you look up these and other statistics, you will once again see “inequalities” between various groups defined by their immutable characteristics (race, sex, age, etc.). But they will almost never be given because the goal of these lessons isn’t enlightenment. It is indoctrination.

One thing is certain: students will never ask just why it is that “white men” are the foil used almost every time to drive home some leftist racial or sex-based point. Instead, they will typically see data like this chart from the Institute for Women’s Policy: 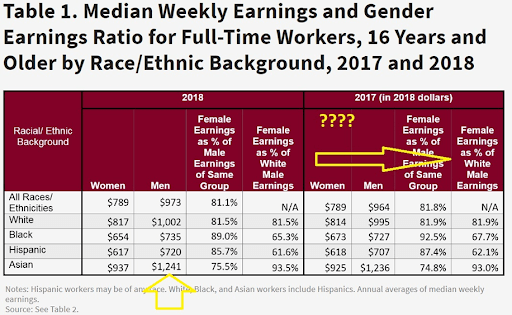 If students don’t take the time to analyze the chart—and why would they?—they will easily miss the fact that the “racial” group with the highest weekly earnings isn’t whites. It’s Asians. Nevertheless, the “female earnings gap” will be presented with “white male earnings” as the foil to illustrate the “gap.” Then they will hear some litany about historical “discrimination,” which will serve as the authoritative explanation for why some arbitrary groups lag behind others.

Indeed, that’s more than half of the point of the current 1619 Project, which America’s “newspaper of record” launched in August. Working to expound on the racial, generation guilt narrative that is core to leftist identity politics, the Pulitzer Center has an entire website devoted to curricula meant to pump this 1619 Project narrative that chalks up the “racial income gap” to the legacy of slavery and pumps that into the classroom.

It is even less likely that students will see other arbitrary demographic information, such as data on U.S. household income by national origin. They might then notice how all of these nationalities are not non-Hispanic whites but on average these groups make more than non-Hispanic whites. Indian (Asian, as opposed to Native) Americans top the list at $100,295, followed by Taiwanese Americans at $85,566. “White” Americans (which, admittedly, encompasses a great many ethnicities, from Irish to Italian to Polish) land 19th on the list, at $57,355. Will public school kids get this information? Doubtful. Will they be led to believe these gaps are due to discrimination? Of course not! (Nor should they!)

Singling out an American minority—non-Hispanic white boys—as the cause of every negative social outcome will not solve these problems. Neither will they be able to “solve” these problems as adults when all they learn is finger-pointing and shaming.

That’s nationally. In California, for example, non-Hispanic white males are fewer than 13 percent of the state’s under-15 population. In Texas, they number less than 16 percent of the population. To be one of these young people, whenever the immutable characteristics of your race and sex are brought up in class, is to be the foil for nearly every major racial or sexual “problem” being studied.

In psychology, when an outnumbered individual is singled out and blamed for issues that are neither his fault nor within his power to solve, it’s called scapegoating. In progressive liberal America, it’s called social justice.

Dr. Neel Burton explains that the need for scapegoats is deeply rooted in human nature. He writes:

[I]n scapegoating . . . uncomfortable feelings such as anger, frustration, envy, and insecurity are displaced or redirected onto another, often more vulnerable, person or group. The scapegoats—are then persecuted, enabling the scapegoaters to discharge and distract from their negative feelings, which are replaced or overtaken by a crude but consoling sense of affirmation and self-righteous indignation.

What is the result of scapegoating on the one being singled out? Dr. Glynis Sherwood describes the long-term consequences of scapegoating: anxiety, depression, low self-esteem, and so on.

How do you respond when you are made out to be the reason for everyone else’s problems? The research seems to indicate that you either internalize it and take on your role as the whipping boy, simply check out and go your own way, lash out, or—by the grace of God—you transcend your situation by finding meaning elsewhere and escaping the torrent of abuse through some other positive means.

Racial scapegoating is abusive. And when it comes to young people, it should be called what it is: child abuse. It is child abuse, obviously, to the non-Hispanic white males whose ancestors, fathers, and selves are the foil for these “problems.” But it is also child abuse to kids of all colors to teach that they are inadequate and that the reason for these inadequacies is their siblings or friends. This teaching makes the possibility of a unified, post-racial America impossible. It shackles living children to a past that is weaponized to scapegoat or leaves them powerless to build a better future for all Americans.