A special election is scheduled for September 10 in North Carolina’s 3rd Congressional District to replace former incumbent Walter Jones, the long-serving Republican who died earlier this year. The district is solidly Republican. Jones earned twice as many votes as his Democratic challenger in nearly every election since he first took office in 1995.

But the district is interesting for another reason, one that every Republican strategist in America should study. It is one of 47 congressional districts in the United States where, in the 2018 midterm elections, a majority of nonwhite voters were projected to vote Republican.

The following map, prepared by elections analyst Geoffrey Skelly at FiveThirtyEight, shows the congressional districts (red) where, if no one but nonwhite people voted, Republican candidates would still be likely to win. 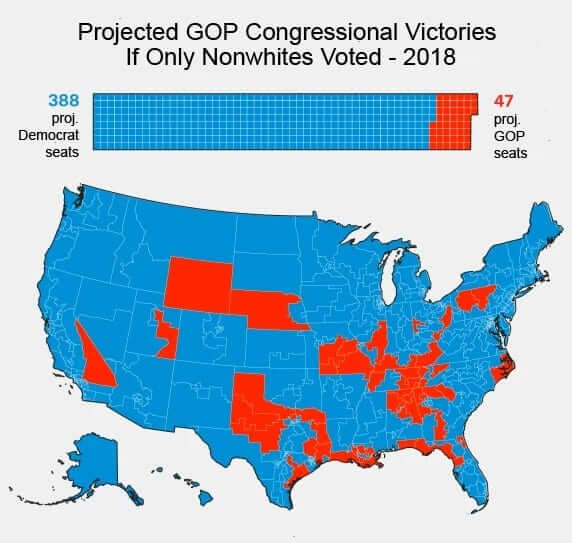 It’s hard to overstate the significance of these 47 congressional districts. They belie the smug certainty on the part of Democratic politicians and strategists across the United States who equate the demographic transformation of America with an inevitable and unbreakable Democratic majority.

The answer requires more research, but it’s tough to imagine what could be more important to any political consultant tasked with wiping that smug smile off the faces of every quasi-racist “demographics is destiny” spewing Democrat in America.

Google, predictably, offers nothing but leftist propaganda. For example, when you enter the phrase “what induced minorities to vote Republican,” you get: “Why people vote against their economic interests – The politics of distrust” (The Economist, 2018); “Why Republican Immigrant Bashing May Not Push Many Latinos to Vote for Democrats” (Scholars.org, 2019); “A threat to democracy: Republicans’ war on minority voters” (The Guardian, 2018); “Will minority and female turnout surges seal Democratic midterm victories?” (Brookings, 2018); “The Republican Party versus democracy” (Vox, 2018).

Google is still a valuable tool. It offers an accurate reflection of the conventional wisdom of the American Left. Republicans are “immigrant bashers”; they are “at war” with minority voters; they are “against democracy”; if women and minorities show up at the polls, Republicans lose elections. And, naturally, if and when minorities do support Republicans, they are voting “against their economic interests.”

Except they’re not. The politics of the Left in America are demonstrably hostile to the economic interests of minorities. Schools in thrall to Democrat dominated unions have robbed minority students of a quality education. Affirmative action (or whatever they call it these days to get around anti-discrimination laws) have pushed less qualified minorities into elite colleges where they struggle to succeed instead of encouraging students to attend schools where they will learn and thrive.

Welfare has destroyed the nuclear family, especially in minority communities, when there is no greater predictor of success in life than being raised in a family that stays intact. And ridiculously extreme environmental laws and regulations have pushed the cost of housing, water, electricity, gasoline, food, and every form of regressive tax into the stratosphere in every blue state, disproportionately harming members of minority communities.