For several days in mid-April, downtown London was paralyzed by thousands of “climate activists” protesting the failure of the British government to act swiftly enough to combat climate change. In mid-March, thousands of students across the United States staged school “walkouts” to demand action on climate change as well.

These protests are ongoing, but the underlying logic is hard to see. The primary sources of anthropogenic CO2 are no longer Western nations, which are only responsible for about 30 percent of all global emissions. The biggest single culprit, if you want to call it that, is China, responsible for 28 percent of global emissions, nearly twice as much as the United States, and 28 times as much as the United Kingdom.

Rapidly industrializing India, responsible for 6 percent of global CO2 emissions, is on track to become the most populous nation on earth. The chances that China and India will sacrifice their national future in order to reduce CO2 emissions are zero. The same holds for every emerging nation, including the demographic heavyweights Brazil, Indonesia, Pakistan, Nigeria, Bangladesh, along with all the rest.

The logic of these protestors also fails when it comes to the science of climate change, although to suggest something might be off in their thinking is heresy. So rather than point out that moderate warming might actually be beneficial to the planet, or that extreme weather is more highly correlated with a cooling planet, let’s accept all the popular wisdom with respect to “climate science.” So what? According to their own theories, it’s already too late. Climate alarmists have repeatedly said we had just a few years left—or else.

In 1989, a “senior U.N. environmental official” said “entire nations could be wiped off the face of the Earth if the global warming trend is not reversed by the year 2000. Then in 2006, former Vice President Al Gore told the Washington Post that “humanity may have only 10 years left to save the planet from turning into a total frying pan.” Fast forward to 2019, and Representative Alexandria Ocasio-Cortez (D-N.Y.) joins today’s alarmist chorus, telling us “the world is going to end in 12 years if we don’t address climate change.”

So where’s the logic and reason behind these protests? The biggest emitters of CO2 are not going to stop emitting CO2, and it’s too late anyway. But there’s an even more obvious flaw in the logic of these protestors, and more generally, in the entire agenda of the climate change lobby: They will not support nuclear power.

The Case for Nuclear Power
While it’s disingenuous for those of us who don’t believe anthropogenic CO2 is a mortal threat to humanity to use the emissions-free argument to promote nuclear power, it’s important to recognize that nuclear power plants don’t emit anything into the atmosphere. Even so-called “deniers,” if they’re intellectually honest, acknowledge that burning fossil fuel still causes genuine air pollution. Although carbon monoxide, sulfur dioxide, nitrogen oxides, lead, and particulates are scrubbed out of most modern power plants in America, the rest of the world lags behind in cleaning up their smokestack emissions.

Even in America, where auto tailpipe emissions are cleaner than ever, air pollution can accumulate around busy intersections in large cities and remains a health hazard. Whether used to recharge car batteries or to otherwise power the electric grid, nuclear energy is 100 percent emissions-free.

Although fear of a nuclear accident continues to animate anti-nuclear activists around the world, nuclear is also safer than ever. But all the nuclear accidents in history—including the big three, Chernobyl, Fukushima, and Three Mile Island—have caused at most 200 deaths. Even that number is based on generous speculation since it is impossible to positively identify the cause of illnesses people develop decades after an exposure.

Of course, there have been accidents while mining for nuclear fuel, or during construction of nuclear power plants. But as this chart shows, using data from the International Energy Agency, coal mining, drilling for oil and natural gas, and harvesting of “renewable” biomass are all far more harmful to human health. 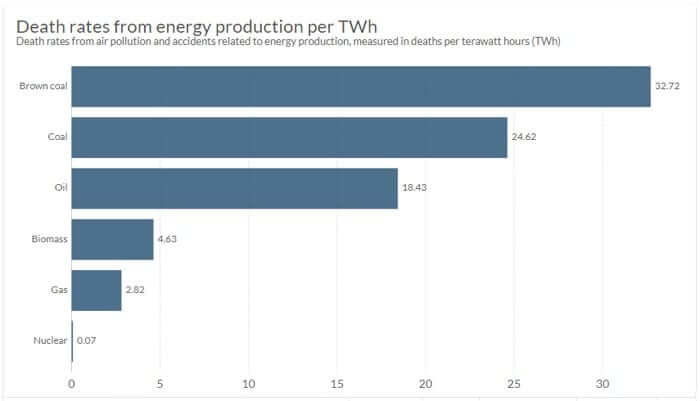 Absent from the above chart are renewables, but this doesn’t mean renewable energy doesn’t have a cost in human life. Renewable energy relies primarily on photovoltaic panels, wind generators, and batteries, all three of which are incredibly resource intensive. Hundreds if not thousands of miners have already died, working under slave conditions, to extract the cobalt and lithium needed for modern batteries. As renewables increase their share of global energy production, this human catastrophe will increase in scale, and to-date there are minimal reforms, and no viable alternative materials.

Not only does nuclear power have an exemplary safety record when compared to other forms of energy, the next generation nuclear power technologies are safer than ever. These new reactors employ even more resilient cooling systems, they can reprocess their own spent fuel, and they are being designed as modules of various power outputs that require far less maintenance.

Nuclear fuel is also abundant. The world’s present measured resources of uranium are enough to last for about 90 years at current global rates of consumption. According to the World Nuclear Association, “this represents a higher level of assured resources than is normal for most minerals.”

This is an important point. Just as the concept of “peak oil” was popularized in the late 1990s, and debunked about 10 years later as new reserves were discovered and new methods of extraction were developed, it is unlikely the global supply of nuclear fuel would diminish precipitously, especially as reprocessing technology improves. The history of resource extraction, at least when market forces are allowed to operate, is that innovation and alternative solutions are always sufficient to offset looming scarcity of any particular resource.

Renewables Are Overrated
Wind, solar, and biofuels are touted as the answer, but the fact is they cannot match the efficiency and reliability of nuclear power. There are a lot of aspects to this, from the incredible waste of land, to the devastating toll on wildlife, to the resource intensity, to the monstrous recycling challenge as these massive installations wear out and have to be replaced. But what should be relevant to the climate activists is the intermittency of renewables, which cannot produce energy when the sun isn’t shining or the wind isn’t blowing.

To compensate for the on again off again nature of renewable energy, fossil fuel has to be employed as backup. This not only guarantees ongoing CO2 emissions, but it has economic consequences. Because natural gas power plants now have to be shut on and off depending on the availability of renewable energy, they cannot efficiently recover their construction costs. This artificially distorts upward the actual cost of fossil fuel energy, making renewable energy look more economical by comparison. Nuclear power plants, which have zero emissions but cannot be rapidly turned on and off, are in some cases being decommissioned to make room for hybrid renewable/fossil fuel systems. In states where this has happened, CO2 emissions have actually risen.

We Need an “All-of-the-Above” Energy Strategy
Global civilization depends on cheap, reliable, abundant energy, and it needs as much of it as it can possibly get. Just in order for average worldwide per capita energy consumption to reach half of what it currently is in the United States, global energy production has to double. This is an immutable fact.

Of course we should continue to develop renewable energy, just as we should continue to research breakthrough energy technologies such as fusion power. But fossil fuel use is not going to go away, its use is going to increase for at least the next 20-30 years until something better comes along. And clean, safe, abundant nuclear power should be part of our global energy portfolio, no matter what anyone believes regarding CO2 and “climate change.”

It is interesting to wonder who is behind the massive demonstrations around the world demanding “climate action.” Whoever they are, perhaps the single biggest challenge to their sincerity is their unwillingness to support nuclear power as part of the solution.