California is a global leader in fighting climate change. California’s citizens consistently have supported cutting edge technologies to wean their state off fossil fuel and nuclear power, and are on track to be using 100 percent renewable energy by 2050. But is this enough? How else can Californians do their part? What more can they do to set a fine example to the rest of the world?

Clearly, more can be done. So why not flood California’s Great Central Valley, sequestering billions of gallons of ocean water that might otherwise be endangering coastlines around the world?

The feasibility of such an endeavor is hardly a pipe dream. One great dam, extending south from the Marin Headlands across the Golden Gate, plumb into the mountainous ramparts of the tony Pacific Heights neighborhood in San Francisco, would easily permit the establishment of a gigantic lake, over 1,000 feet deep, to extend from majestic Mt. Shasta in the north to the red rock Tehachapi Mountains far to the south. For nearly 500 miles from north to south, and 150 miles or more from east to west, this gigantic reservoir could absorb 100 percent of California’s precipitation and storm runoff for decades, slowing the rise of our expanding oceans.

At the same time, Californians can quickly harvest the “low-hanging fruit” of seawater sequestration, by flooding the Imperial Valley. Since much of the Imperial Valley is below sea level, all it would take would be a pipeline, siphoning water out of the ocean off the coastal enclave of La Jolla, crossing the mountains to dump it into the Salton Sea.

Side benefit! The shrinking Salton Sea would be revitalized. Additional side benefit! A trunk pipeline could, also with no energy input required, drain additional ocean water into Death Valley, which is also below sea level. 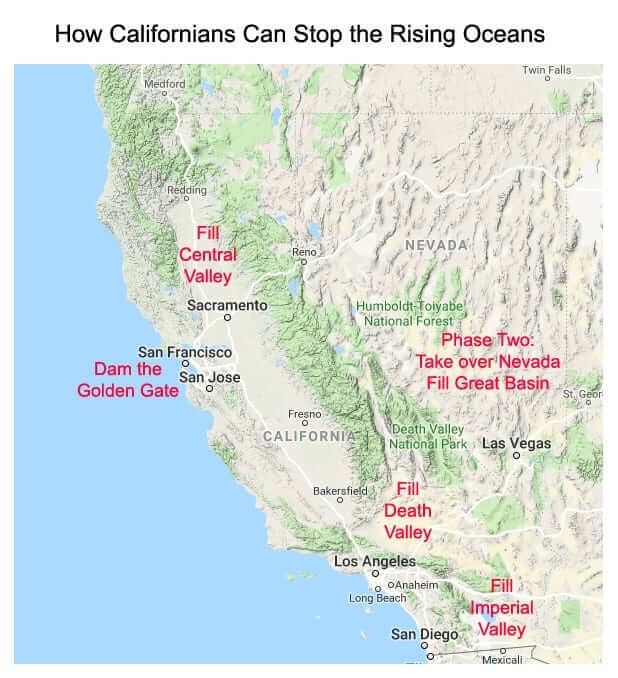 Sequestration, after all, is hardly a foreign concept to awakened scientists, especially in California, who, year after year, spend billions in taxpayers money to study ways to stop the rising seas. But instead of sequestering carbon dioxide in caves, why not sequester seawater in California’s Central Valley?

It shouldn’t cost that much, after all, since all that is needed is a single dam, four miles long and less than a half-mile high, sealing off the Golden Gate. It shouldn’t take that long, either. Opening back in 1937, the famed Golden Gate Bridge was built in three years. If Mt. Tamalpais is scraped off, along with most of the rest of the Marin Headlands, and bulldozed into the bay, surely this great work can also be completed within three, four years tops.

As for the cost, everyone knows that no cost is too great to stop the rising seas. Californians have experience spending vast amounts of money to fight climate change. They drive on pitted, dangerous, negligently inadequate roads in order to pay for “light rail” and a “bullet train.” They pay staggering rates for electricity and water in order to pay for “wind power,” and to “save the Delta Smelt.” Californians, apparently, have hundreds of billions to spend on such projects, because no cost is too great when the fate of the planet hangs in the balance. It’s time to think big.

To assist with the cost, California’s many outspoken billionaires, nearly all of whom favor saving the planet by any means necessary, should also pay their “fair share” for the great sequestration. A statewide “climate emergency billionaire” tax could be assessed on 100 percent of their liquid assets (their fixed assets will be underwater), raising additional hundreds of billions of dollars.

The social justice element of this ambitious project might be troubling, since millions of “people of color” reside in California’s Central Valley. But not to worry, because the western portions of San Francisco and Marin County, along with the entire Silicon Valley, will also be inundated. This great migration will be a fantastic opportunity for California’s affluent coastal elites, many of them white “allies,” to link their fates with their disadvantaged counterparts, and to share in their hardships. Nobody will have “privilege,” and everyone will be heroes of the environment.

A true skeptic, perhaps even a “denier,” might correctly point out that filling California’s Central Valley with 1,000 feet of water would only cause the world’s oceans to drop by 1.5 inches. Filling the Imperial Valley and Death Valley might buy another inch. This sort of debate, however, should be silenced. We all have to do our part. We have to start somewhere. And since even now, the oceans are only rising by about one inch per decade, California’s brave sacrifice buys the planet about 20 years!

But where will all these Californians go, if nearly half the state’s population is displaced? Some of them could move to Los Angeles, a welcoming city that is, after all, already a magnet for the displaced of the world. What’s another 20 million newly arrived people for a “woke” population of wealthy liberals to support? Construct high rises in Brentwood and Beverly Hills in the backyards of the movie star mansions. Let’s embrace our density!

There’s an even bigger upside to the diaspora that California’s great new lake will cause. California’s displaced millions can also move to Nevada, where they will tip the political balance forever in that state as they vote for Democrats. These newly minted, fabulously enlightened policymakers can use their mega majority in Nevada to support yet another monumental step forward in the battle against rising seas—they can flood the Great Basin, allowing the people of America’s Intermountain West to also signal their illustrious virtue.

It is time for the spectacularly woke liberal voters of California to step up to save the planet from rising seas. Sequestration is an idea that’s time has come, because no price is too great, when the planet itself is in peril.