If you haven’t watched, you would think the National Geographic Channel’s cable series “Mars,” would be a straightforward dramatization of human colonization of the Red Planet in the near future. You would be half right.

The show is indeed a well-imagined portrayal of the first colonies on Mars, but rather than being a straightforward dramatization of this exciting next chapter in human civilization, the “Mars” series is saturated with leftist propaganda.

By the end of the second mini-season, which concluded December 17, the messages were clear: humans have brought planet Earth to the brink of apocalyptic ruin—capitalist, climate-denier humans in particular—and they’re going to do the same thing to Mars. They will, that is, unless an underfunded, heroic and beleaguered, transnational band of multicultural warriors with seductive accents manages to stop them.

The contrast down on the Martian surface couldn’t be more obvious. On one side the aforementioned “good” colony of scientists and environmental justice zealots. On the other, the “bad” colony, lavishly funded by the “Lukrum Corporation,” populated by remorseless shills, bent on destroying the fragile ecosystems of Mars for fun and profit.

Just in case this cartoon caricature of ideological struggle extending itself into the solar system isn’t obvious enough, the Martian drama is frequently interrupted with documentary interludes. These segments alternate between sober commentary by climate scientists, warning us of imminent disaster, and the usual images—mountain-sized formations of ice calving into a warming ocean, raging wildfire infernos, and, of course, oil-soaked waterfowl in their final death spasms.

If the rhetoric seems over the top, both in the dramatic dialogue, and in the documentary commentary, that’s because it is. Here are some actual quotes: “Whenever the wealth of the corporations is greater than the wealth of governments, the corporations win.” “People have to join together to rein in the companies.” “Oil is a war against life.” “Big corporations will view Mars as an ‘unfettered’ regulatory environment.” “Science faces skepticism from the public and opposition from the people in power.” “Our mission was to explore this planet, not watch it be exploited by corporate thugs.”

And what’s the point, if you take this literally? That colonies on Mars, a moonlike, cratered rock with barely a trace atmosphere and no archeological remnants (notwithstanding speculation from ancient astronaut theorists), require environmental impact statements? That Mars might experience catastrophic climate change? That its “ecosystems” must not be disrupted? Really? No. This is television docudrama intended as a convincing metaphor. After all, if we have to be this cautious on Mars, imagine how much more cautious we’re going to need to be here on Earth.

While National Geographic makes transparent use of the eventual settlement of Mars as a metaphor for the ideological conflict currently raging on Earth, this cable television production itself might serve as an apt metaphor as well. Because this TV show is affiliated with—and partially owned by—a ridiculously well-endowed foundation, the National Geographic Society, yet presents its case as if it is arguing against the all-powerful establishment.

This is one of the biggest lies in the entire debate over how to manage resources on Earth: the lie that says the people concerned about “climate change” are the underfunded underdogs, who bravely face the corporate behemoths and their paid-off puppets. Nothing could be further from the truth. The following table shows, for the most recent year for which there is data available, the annual revenue of just a few of the environmentalist nonprofits operating in America.

The National Geographic Society is the largest on this list, but the tail is long. Beyond this sampling, there are thousands of activist nonprofits dedicated to fighting “climate change,” or “smart growth,” or “getting people out of their cars” and promoting mass transit, or “environmental justice,” and so on. To paraphrase Carl Sagan, the man who once said, “terraforming Mars is an idea whose time has gone,” “billions and billions” of dollars are spent each year by environmentalist nonprofits in the United States, and “billions and billions” more around the world. 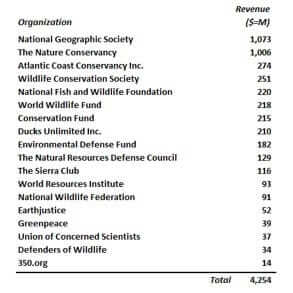 To be fair, much of the work being done by environmentalist nonprofits is valuable and should be supported. Back in the good old days, Greenpeace had one mission: save the whales. And they succeeded. The Sierra Club had its origins in saving what remained of old-growth Sequoiadendron giganteum redwood trees; the club even advocated restrictions on immigration based on the impeccable logic that if millions of people continued to pour into the United States, that would put additional pressure onto ecosystems. But that idea went away as the alliance between the hard Left and the environmentalist movement solidified.

Now, instead of prioritizing efforts to end what are the urgent and genuine environmentalist challenges of today—tropical deforestation to grow “carbon neutral” biofuel, strip-mining the oceans to feed Asia, slaughtering the last herds of Rhinos because supposedly consuming powder from their ground-up horns works better than Viagra, slaughtering apex ocean predators that are essential to marine ecosystems because serving soup containing Shark fin confers status in China, rampant rates of population increases among the most backward, misogynistic societies on Earth—instead these well-heeled environmentalist nonprofits are turning all their firepower towards ending “climate change.”

The irony here is off the chart. Enlisting the financial power and moral credibility of American and international environmentalist organizations in the fight against “climate change” is a corporatist wet dream. Except, oops, it’s not a dream. It’s reality. You see, when it comes to fighting “climate change,” the environmentalists have a lot of help. And why wouldn’t they?

Fighting climate change, as it is interpreted in contemporary society, means you can’t build any more homes on open land. Instead, you have to densify, in order to reduce the “carbon footprint.” This makes established landowners and land developers filthy rich, since only they have the preexisting assets and financial heft to build more homes. It enriches the public sector, as higher property taxes are collected from real estate that has artificially inflated value, and as the real estate portfolios of pension funds soar commensurately.

Fighting climate change means consumers have to buy new cars and new durable appliances, since the old ones waste energy and water, and aren’t “smart.” And speaking of “smart,” fighting climate change means we’ll have to build “smart cities” and the “internet of things,” whereby not only will every aspect of our resource consumption be micro-managed—with “incentives” to reduce usage at algorithmically optimized moments (never mind if you wanted to wash your shirt now, and not when the grid is ready to accommodate you), but you’ll also be micro-surveilled.

Fighting climate change means that international corporations will get a few more profitable quarters, as they sell new automobiles, light rail cars, busses, washers, dryers, ovens, cooktops, water heaters, solar panels, streetlights, grid upgrades, etc., that people will be required by law to buy. And everything from your coffee maker to your toilet will be “wired.” You will not only be mandated to buy these products, but you’ll have to “subscribe” to them in order to facilitate software upgrades. You’ll never really own them. But who wants a dumb washer, after all?

Fighting climate change will mean that public entities will no longer have to build new infrastructure, and will use that money instead to hire more bureaucrats to watch over us, and to pay themselves more. Fighting climate change will mean that all rights to extract and utilize “carbon” will be traded—amidst stupefying corruption and fraud—on an exchange, with the number of extraction credits slowly ratcheted down, allowing the market to set the price per unit. How wonderful.

And while the transnational corporations are getting richer, and political bureaucracies are expanding their reach, and environmentalist organizations continue to swell with virtue, what will happen to the environment—along with possible minor warming, possibly partially contributed to by humans? A lot will happen, that’s what.

Population growth will rage unchecked in the most vulnerable regions of the planet because nobody wanted to be called racist, ocean fisheries will collapse because nobody wanted to stand up to China, forests will be replaced with carbon-neutral corporate plantations because that was the “science-based” policy of choice, and charismatic megafauna will go extinct, because, well, you know why.

While this happens, what will the National Geographic Society be up to? They’ll produce more “climate change” propaganda, purportedly to warn us about corporations and all that.

Yes, “Mars” is a metaphor. But perhaps not the metaphor its producers intended.