Before she blocked me on Twitter, I frequently read the posts of Shannon Watts, the founder of Moms Demand Action for Gun Sense in America, as well as tweets from former New York Mayor Michael Bloomberg and his Everytown for Gun Safety, which is the chief financial backer of Watts’ organization. Combined, the two gun control groups stand front and center in America’s anti-gun cult, with 4 million members, which is about on par with the membership of the National Rifle Association.

It’s alarming how frequently Watts manipulates data to craft a narrative that America is held hostage to a violent gun culture, and how often she and her organization regurgitate the usual debunked Democrat Media Industrial Complex myths, lies, half-truths, and conspiracy theories.

Anti-gun Propaganda
On November 26, as President Trump visited Mississippi ahead of the U.S. Senate runoff election, Watts posted the following:

Mississippi has the second highest rate of gun deaths in the nation – nearly 18 deaths per 100,000 residents.

Anti-gun propaganda is powerful, and Watts’ skills are finely honed. Her LinkedIn profile shows she held director and vice president positions with global reach in public relations at such prominent firms as Monsanto and General Electric Healthcare.

I’m not certain where Watts gets her information for that tweet, since my research showed that Mississippi has the fourth-highest rate. But that’s really not the point. My concern is with how she always withholds the specifics. Based on the most recent Centers for Disease Control and Prevention figures, Mississippi had a total of 587 firearm deaths in 2016: 268 were suicides, and 282 were homicides.

Imagine a world in which there were no guns at all. If those who are suicidal couldn’t access firearms, it is likely that some—perhaps the majority—would suffocate or poison themselves. In what unquestionably is a major public health crisis in America, suicide rates have been rising the last two decades. A gun, however, is still an inanimate object in a suicidal American’s hands, just as plastic bags, vodka, and sleeping pills are. Increasing suicide rates are wholly unrelated to discussions about  legal and responsible gun ownership.

There is a mechanism already in place with the National Instant Criminal Background Check System for the mentally ill seeking to buy firearms. Is this background check system perfect? Of course not, just as no alleged “solution” pitched by Watts and Bloomberg is “perfect.” The idea of due process for would-be gun owners with mental illness is, I’m certain, constitutionally inconvenient to the anti-gun cult.

Although the pro-Second Amendment side is already suspicious of the cult’s attempts to infringe on our gun rights, increasingly we grow anxious about its desire to infringe upon our Fifth and 14th Amendment rights as well. I am aware that many municipalities across the United States are lax in reporting data to the CDC, but a failure of government, at any level, only affirms our God-given right to keep and bear arms; those municipalities are a more worthy target for people like Watts than law-abiding gun owners—none of whom infringe upon her or her fellow moms’ constitutional rights.

We know that since 1993, 2 million purchases were denied due to background check failures, although data is unclear as to how many adjudicated mentally ill Americans attempted to buy a firearm to commit suicide. Fact is, being barred from purchasing a gun due to mental illness did not decrease suicide; it actually only increased rates in other methods. Perhaps it seems crass on my part, but as far as I’m concerned, lumping suicides into total gun death data is exploiting the dead.

America Doesn’t Have a Gun Violence Epidemic—Democrat Cities Do
Another effective play out of the Everytown playbook is the use of eye-catching color graphs that show America’s alleged gun apocalypse: 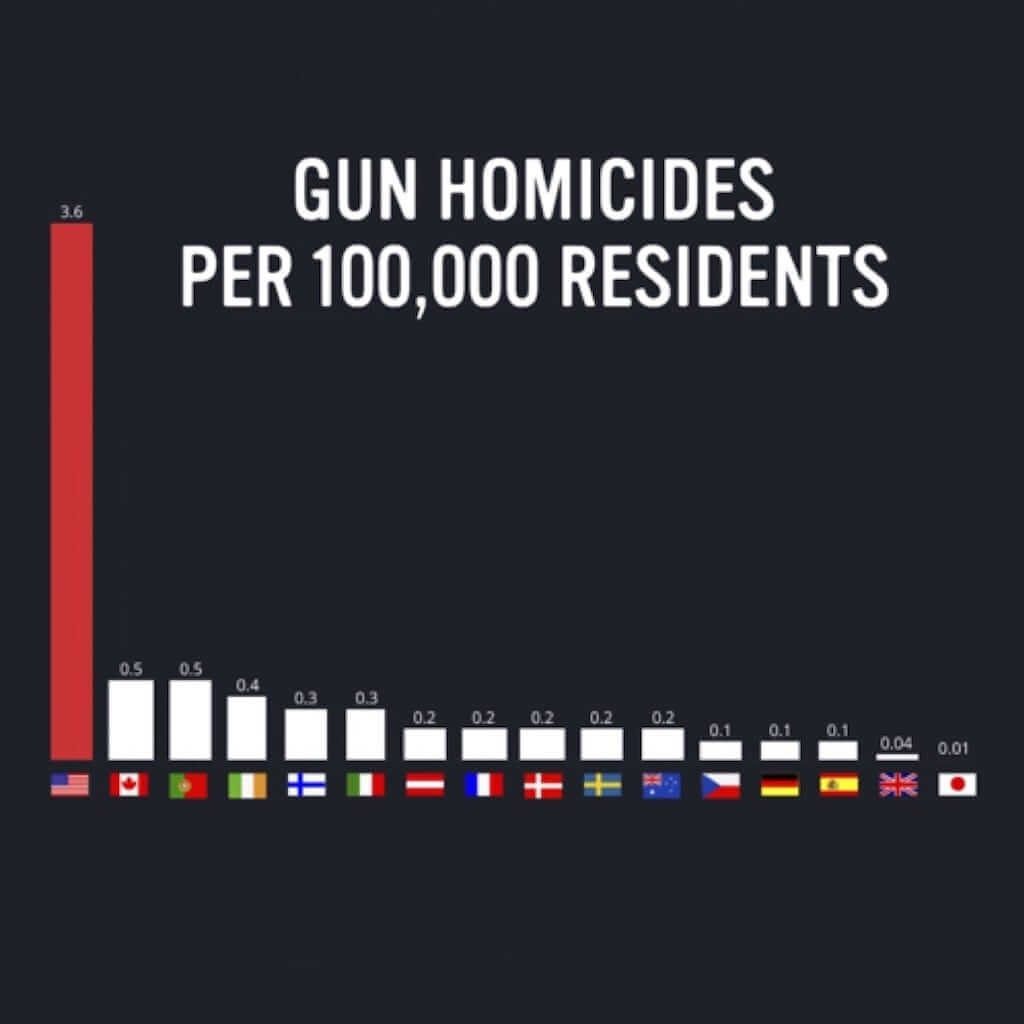 The other approximately 15,000 annual gun deaths are homicides. It will come as no surprise that the the vast majority of cities with the highest rates of gun-related homicides are governed by Democrats—and have been for a very long time. Gun controllers’ own data bear this out.

I’m not sure The Trace, which is clearly Democrat-leaning, realizes the irony in its activism.

Most of the same Democrat cities are present in the 2016-2017 graph; and several of their homicide rates increased in the intervening period.

How about non-fatal shootings?

Notice the overlap of several cities; all are run by Democrats, except for Jacksonville.

Do Watts and Bloomberg know even a scintilla of this information? I suspect they do, just as they know that “assault weapon” has no actual mechanical or technical meaning, regardless how much their DMIC and politician sycophants parrot the lie.

I can’t really fault them for being so out of touch with what’s happening in long-time Democrat ghettos and inner cities. Bloomberg’s net worth is $46 billion, making him the 11th-wealthiest man in the world. Watts’ home, according to property records, is worth more than $1.2 million, with a nearly $1 million mortgage open on it.

It’s not coincidental that affluent, privileged, white Democrats are some of the most ardent anti-gun Americans.

As a postscript, the NRA wields far less influence than the organization proclaims. Yes, the group has some influence, and, yes, it’s politically active. But what the NRA has spent in the last two decades on all political activity is a pittance compared to what other organizations in unrelated industries spent in 2016 alone. Around 20 percent of the NRA’s total spending has occurred just in the last three years, although anti-gun groups spent $37 million on this year’s state and federal midterms, compared to the NRA’s $20 million. Aspiring gun confiscators always say the NRA has blood on its hands, but I’ve always thought those with fantasies of confiscation have more.

If the cult wants to be taken seriously by so-called “gun nuts” like me, then they need to start telling the truth—the whole truth.