President Trump’s nomination of 10th U.S. Circuit Court of Appeals Judge Neil Gorsuch to the U.S. Supreme Court will be met by fierce resistance by Democrats in the Senate and unrelenting demagoguery from left-wing groups and media outlets. About that there can be no doubt. (American Greatness readers may recall a reference to Gorsuch in my December 22 article, “The Trump Court: SCOTUS Could Stand Some Disruption.”)

The opposition is unwarranted. Gorsuch is an excellent choice, and he should be confirmed by the Senate easily and without unnecessary delay. The 49-year old Colorado native, a Harvard Law graduate and former Supreme Court clerk, was so non-controversial when President George W. Bush appointed him to the 10th Circuit in 2006 that the Senate confirmed him unanimously on a voice vote.

That was then. Gorsuch’s impressive academic achievements (including a Marshall Scholarship to Oxford University, where he obtained a Doctor of Philosophy in Law), professional experience (both in private practice and with the Department of Justice in the George W. Bush administration), and a decade of prior judicial experience will likely not deter Senate Minority Leader Chuck Schumer (D-N.Y.) from now claiming that Gorsuch is “unqualified” and “outside the mainstream.”

Some of his colleagues have already begun. 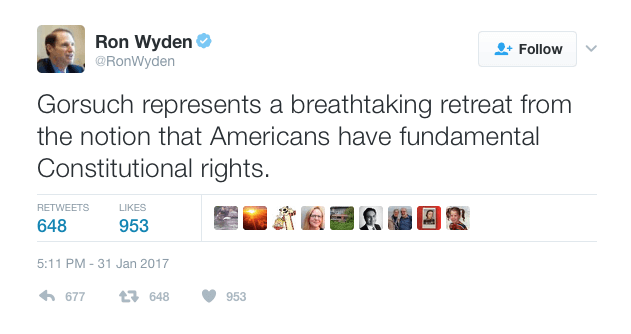 Their arguments against Gorsuch are baseless and phony. The truth is, Trump’s opponents would have reacted the same way no matter who the president chose.

Senate Republican leadership, and especially Senate Judiciary Chairman Chuck Grassley (R-Iowa), will have to overcome massive feigned hysteria by the Left in order to secure Gorsuch’s confirmation. Liberal pressure groups such as Alliance for Justice will probably blanket the airwaves with ads attacking Gorsuch. Senate Majority Leader Mitch McConnell (R-Ky.) should be prepared to exercise the so-called “nuclear option”—eliminating the filibuster for Supreme Court nominees—if necessary to prevail.

Why are the Democrats behaving this way? There are several reasons.

First, Senate Democrats were enraged with Grassley’s and McConnell’s refusal to consider Judge Merrick Garland, lame duck President Obama’s nominee to fill the vacancy left last year by Justice Antonin Scalia’s death. Of course, it would have been extraordinary to consider changing the balance of power on the High Court in an election year. The Republicans had sound reasons to stonewall the Garland nomination, but Senate Democrats have been waiting for the opportunity to even the score. Moreover, with four reliable liberal Justices already on the court (Ruth Bader Ginsburg, Stephen Breyer, Elena Kagan, and Sonia Sotomayor), Democrats realize that they’ve been denied a liberal majority for decades to come. They are furious.

Second, the Democratic Party and its various constituencies have adopted an obvious strategy of massive resistance to Trump’s election: protest everything, organize noisy and visible demonstrations, and object, object, object. This serves the dual purpose of throwing a collective tantrum in disappointment over Hillary Clinton’s defeat, and attempting to de-legitimize Trump’s presidency with orchestrated discord. Trump’s SCOTUS nominee, no matter how qualified, is an excuse for a choreographed conniption. The public is learning to disregard such petulant behavior, just as one would ignore a whining child.

Third, ever since Senate Democrats (led by Ted Kennedy and Joe Biden) succeeded in smearing Robert Bork when President Reagan nominated him to replace moderate Justice Lewis Powell in 1987 (ultimately defeating Bork’s nomination by a 58-42 vote), liberals have recognized their ability to politicize the Supreme Court confirmation process and demonize principled nominees.

Bork, a former Yale law professor, author of influential legal texts, former solicitor general of the United States, and sitting judge on the D.C. Circuit—second only to SCOTUS in importance and prestige—was arguably the most qualified candidate ever to be nominated to the Supreme Court. Yet, through false and inflammatory rhetoric, Kennedy and Biden were able to portray Bork as an unqualified “extremist,” in the process coining a new verb: “borking.”  The Left will try to “bork” Gorsuch. That’s just what they do.

Despite the Democrats’ consistent bad faith opposition to numerous Republican judicial nominees since 1987—including the vicious attacks on Clarence Thomas in 1991 and the attempted filibuster of Samuel Alito in 2006—Senate Republicans have failed to reciprocate against a Democratic president’s nominees. For example, when President Bill Clinton nominated Ruth Bader Ginsburg to the High Court in 1993, the Senate confirmed her by a 96-3 vote—despite her record of radical advocacy, including prior service as general counsel to the American Civil Liberties Union. This is yet another example of Republicans following the Marquess of Queensberry rules, even when the Democrats routinely use brass knuckles and hit below the belt.

Fourth, and finally, the Left is firmly in control of legal academia and the organized bar, allowing it arbitrarily to declare what the “mainstream” of legal scholarship is, and to pronounce which candidates espouse views that are “acceptable” to the liberal establishment. In the past, the American Bar Association has played an ignominious role in tarring conservative nominees as “unqualified” or “lacking judicial temperament.”

The foregoing considerations aside, Democrats should be delighted with Gorsuch’s nomination. Unlike the combative and outspoken Bill Pryor, also on Trump’s High Court short list, Gorsuch is not on record criticizing Roe v. Wade (1973). Moreover, Gorsuch clerked for Justice Byron White, a moderate who was appointed by President John F. Kennedy. When White retired, Gorsuch also assisted Justice Anthony Kennedy, the most liberal Republican appointee currently on the Court. The most notable feature of Gorsuch’s judicial decisions is that they are well-written and display a laudable respect for religious expression—hardly blemishes in the eyes of American voters.

And, it must be remembered that the vacancy Trump is filling belonged to Scalia, a stalwart originalist jurist who personified constitutional conservatism. Critics will pore over Gorsuch’s rulings on the 10th Circuit for clues about his judicial philosophy. No matter what they find—and the search will likely yield few meaningful insights, since a court of appeals judge is bound to follow Supreme Court precedents—Gorsuch is not realistically going to shift the Court to the right. At most, Gorsuch will preserve the balance on the Court as it existed prior to Scalia’s demise. Gorsuch also has the benefit of looking like a judge from Central Casting, exuding poise and grace.

For these reasons, Senate Democrats would be foolish to attempt a filibuster, which could prompt McConnell to eliminate that tool, completing the process that Sen. Harry Reid (D-Nev.) began in 2013 when the Democrats controlled the Senate. Schumer should be thinking ahead to the next vacancy. The real fight will come later, if and when one of the liberal Justices (Ginsburg, for example), or the swing-voting Kennedy, departs the Court through death or retirement and creates another vacancy. At that point, when the ideological balance of the Court could tilt decisively rightward, the Democrats will really pull out the stops.

In the meantime, consider the liberal opposition to Gorsuch a dress rehearsal for the ugly battle yet to come.