This story about the RNC’s platform deliberations and the decision to “toughen” the stance on pornography by deeming it a “public health crisis” is everything that is wrong with current GOP and conservative thinking about politics. In the first place, a party platform should never be so comprehensive in terms of policy. A platform should be, instead, a declaration of principles from which party leaders, politicians, and citizens can inform their understanding of politics and policy.  Declaring porn to be a “public health crisis” within the confines of the Republican Party platform probably satisfies Concerned Women for America and other socially conservative interest groups that they have been heard and that their opinions have been taken seriously, but it should not. What they (and, frankly, all sensible Americans) really want is a culture in which it is safe to promulgate the idea that porn and a host of other vices are bad for the human soul and dangerous to the cause of human Liberty because they have the effect of degrading people and making them unfit for the exercise of it.  A throwaway line in the platform of the Republican Party does absolutely nothing to advance that argument or to persuade voters who do not already understand it to be the case. Indeed, if anything, it hampers the ability of the GOP to be persuasive on this front because of its heavy-handed and sanctimonious approach.  And, of course, we can expect tweets like this: 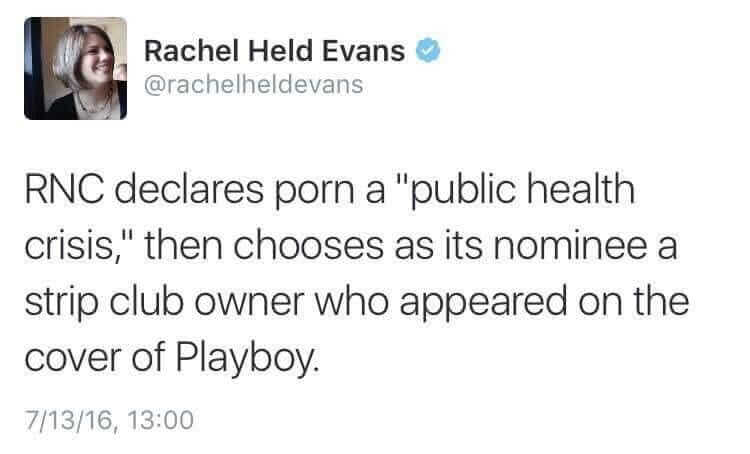 The point is that if you have to make so obvious a point as “porn is bad for the human soul” from the top-down you’re operating from a point of weakness and you’ve already lost the argument.  On this and on a number of other questions, social conservatives have already lost the argument. The culture is degraded in so many ways and social conservatives have lost so many important battles, that one can see how they might take some false comfort in a “victory” like this. But this is like the San Francisco Giants getting excited about beating a local high school team. An exhibition like that would tell them exactly nothing about their prospects in the NL West and even less about their chances of winning the Pennant and then the World Series. It would be a waste of time in that it does not prepare them for the real challenges before them. Further, even if this exhibition game was somehow edifying and memorable for those high school players (our convention delegates in this metaphor) those players cannot take that experience and spread it to improve the general quality of play in high school baseball. It’s a once off. A cute exercise at best and one that does not even serve the interest of anyone save the owners who may get the benefit of the good will of their community. Don’t social conservatives see that this is, in effect, a way of placating them and hoping they will shut up?

It’s time to get real here, social conservatives. We’ve already lost the argument–at least for the foreseeable future. What we are doing here is stamping our feet and spinning our wheels. It accomplishes nothing except the illusion of movement.  Does that mean we should do what party leaders are hoping we will do and shut up? Should we be satisfied with this chance to run the bases after a big league game? Of course not. The cause of Liberty is too important and the souls of our children are too precious. It would be venal and cowardly to abandon the fight for the culture simply because the immediate battles appear to have been lost. But when your strategy produces nothing but repeated failure, at what point do you step back and realize it isn’t working and resolve to try something new? The fight for the direction of American culture is worth having and the broad outlines of the direction it ought to go should be affirmed in any worthy GOP platform. But specific claims about hot button social issues (apart from the right to life which is a fundamental founding principle of America and should be, in no circumstance, abandoned or ignored) belong in the realm of culture and politics. They are matters for persuasion and debate.

3 responses to “Stamping Our Feet, Spinning Our Wheels”