“Why,” I hear people ask, “are Christian men such cowards? Why don’t we see them standing up for other Christians? Or for God?”

Having been active in conservative Christian circles for the last decade and a half, I can relate to the sentiment behind this question.

Oftentimes I have wished that men would take as much initiative in socially conservative, pro-faith causes as they do in fiscally conservative, pro-business causes. It was a rude awakening to realize that Christianity is not the same thing as the “conservative movement,” despite the famous three-legged stool joining faith, defense, and capitalism back in the Reagan era.

I have shared the dismay of many upon seeing the disproportionate role that women have had to play in trying to fight for Christian sexual ethics. Given that the greatest threat to Christian sexual ethics comes from feminism, it has never looked appropriate for men to be so outnumbered by women in the activist ranks.

A crop of pro-masculinity Christians has arisen, but their numbers still appear small and scattered. Some of them seem to celebrate a tough guy persona that clashes with the cooperative spirit and servant leadership necessary for mobilization. Without a greater critical mass, we have to live with the fact that women lead so many of our pro-faith efforts because they have no other choice. Men won’t do it.

It pains us to see the wide-scale complacency, deviousness, and betrayal of pro-faith causes by Christian men. This includes pastors. It also includes Christian men who have tremendous wealth and influence and who could step in to defend the faithful, but instead choose to let other Christians who have been “canceled” wither and vanish from public consciousness.

Perhaps the height of dismay came last summer, when Christian commentator Mike Adams shot himself in the head in North Carolina shortly after having to leave his long-standing professorship. As the details emerged of his private life, it became clear that he had reached out and had found doors closed to him by Christian men who loved his public stances but didn’t want to help him at his darkest hour.

I can understand why so many Christians, especially women, complain about the lack of courage on the part of Christian men.

But I will not go around making these complaints anymore. I have an answer to the question, “why are Christian men such cowards?” Here’s a hint: it’s a lot more complicated than cowardice. It touches upon what appears the only solution, and indeed, the only viable course of action for Christians who want sincerely to live out their faith publicly and not get canceled like Mike Adams.

The solution is daunting but simple. We have to stop expecting to live cancel-proof lives in a civilization run by people who hate Christians. Half the places that cancel us are places we shouldn’t want to be working for anyway. Andrew Torba, the CEO of Gab, has been striking at this theme powerfully with his references to a “parallel society.” He has the kind of insight and vision that we need. But we need more than just one hero. We need a movement.

I have the utmost respect for Andrew Torba, but I would suggest that we can’t rest at building a “parallel” society, which to me sounds like we plummet at the same slope, just on a timetable several years behind secular America. I would prefer to think of a perpendicular Christian society. At some point we break away from the downward slope of secular society, and shoot upward instead of downward, reversing the direction of cultural decadence entirely. 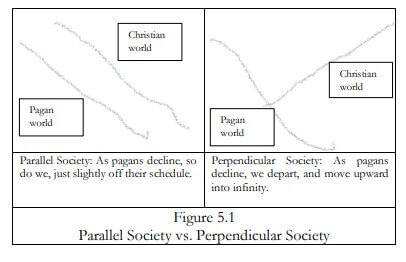 I don’t think we can rest at designing an independent “infrastructure” or “economy.” Nor does the solution lie in building new “institutions,” since we have spent too many billions of dollars on Christian institutions that all end up going woke or becoming so corrupt that they implode. These are structures, like shells, without a secure conscience. They can be infiltrated by saboteurs or taken away from us by grifters. We can be ousted from them after we have built them, if phonies take them over.

Jeff Dornik and I have put forth four major realms—schools, churches, workplaces, and media—that all need to be built from scratch.

If we only try to launch new schools, we will repeat the errors of past Christians who created institutions that chased after accreditation and became indistinguishable from secular schools.

If we only try to launch new churches, we will make the mistake of people who broke away from corrupt denominations in the past only to raise up new ones that depended on money from the unbelieving world and had to surrender their orthodoxy in order to survive.

If we only try to launch new Christian businesses, we will get manipulated by companies that market to us as Christians but then engage in the same woke policies behind the scenes.

If we only launch new Christian media, we will contract Fox News syndrome again—throwing our support to outlets that turn out to be staffed by cynics on the other side.

Movements already exist bringing together people who have noticed cancel culture and have concluded that we can only overcome it by building something of our own. What remains is to get people fighting cancel culture in these different realms to see their fight as one and the same. We are trying to build a Christian civilization where Christian men can live out their faith publicly and boldly while still being able to support their families.

Once I saw the answer to the question—why are Christian men such cowards?—I couldn’t participate in the griping and moaning sessions anymore. Because I realized that the whole Christian community bears responsibility for where we have ended up, and has no excuse not to work at building a better option.

The suicide of Mike Adams rattled me more than I would have expected. In many ways I had a situation quite different from his. I had a wife and two children. I had fewer inroads into the conservative establishment than he did, considering that Adams got platformed by conservative groups that considered me unacceptable. In other ways, I found myself relating to his plight a little too closely. Only a few years younger than he, I had also gone through a period when audiences cheered me on for taking controversial stands, followed by a sudden let-down when people stopped returning calls.

Though this might sound scary, I could relate to the gloom that led to his ultimate self-destruction. It sickens a person to hear the distorted logic Christians have used to rationalize abandoning people who made sacrifices to defend the Christian faith. One can lose faith in everything as a result of the slow realization that many people who presented themselves as valiant defenders of Christianity were nothing more than phonies, opportunists, egomaniacs, and otherwise horrible people. I can understand why these hard feelings could lead a person to decide that nothing could redeem the pain of continuing to live.

I went down a different path from Mike Adams, because I had a wife and two children who needed me to continue living. When that presented itself as the reason that Mike Adams’ story ended in suicide and mine did not, I got to thinking more about the role of family obligations in Christian men’s lives.

I understood, finally, why Christian men are not speaking up more. They know enough about the world to know that if they lose their jobs, the Christian community will abandon them. And so will their wives in many cases. As I laid out in a chapter of Cancel-Proof Christianity, a study by Harvard University found that a major cause of wives filing for divorce was the husband’s loss of a job. Seventy percent of heterosexual divorces are filed by women. And as people like Jeff Younger know all too well, family court is anathema to men.

Christian men live in communities that place tremendous importance on family. They surround themselves, in many cases, with conservatives who have internalized the free market, up-by-your-bootstraps rhetoric of Reagan’s three-legged stool. They know they will receive limited sympathy and very little help from other Christian men if they lose their jobs. And if their wives leave them, they will suffer not only the harassments of divorce court, alimony, child support, and the rest—they will also bear the stigma of having failed as the head of a household.

That’s not individual cowardice. That’s the failure of the Christian community to understand the stakes in cancel culture. As I state in Cancel-Proof Christianity, the Christian conservative movement does not have a good track record at sustaining support for people after they get canceled. Jesus Christ criticized the Pharisees in Matthew 23:4, pointing out that many of them place heavy burdens on others but won’t lift a finger. That same charge could be hurled at many leaders of the mainstream conservative movement. They love to raise money off of canceled people during their 15 minutes of fame, but they will let the situation get so bad for canceled men that we have to speak seriously about the risk of suicide.

It is wonderful that some of us, even with families, stood up and took a stand. But this is the breaking point for cancel culture. If we cannot build a civilization in which Christian men can support their families and profess their faith publicly, cancel culture will force such men to choose: they can be Christian or they can be family men, but not both. The end result, over time, is that Christianity will get canceled.

To speak of building a new Christian civilization is one thing, and to build it is something else entirely. That’s why Jeff Dornik asked me to write Cancel-Proof Christianity and we’ve set out on a four-conference series, with the first one looking at the practical steps to launching independent Christian schools. Check out the landing page and join us.