We have removed living from life itself. Vulgar productivism and its consequences have been a disaster for the human race.

Robert Kennedy laid out how our worship of The Line leads to an even greater poverty:

Even if we act to erase material poverty, there is another greater task, it is to confront the poverty of satisfaction— purpose and dignity—that afflicts us all.

Too much and for too long, we seemed to have surrendered personal excellence and community values in the mere accumulation of material things. . . .

The tyranny of the metric has led us to be alienated from the many non-commodified connections and goods that truly make life worth living. All that matters is “The Line.” 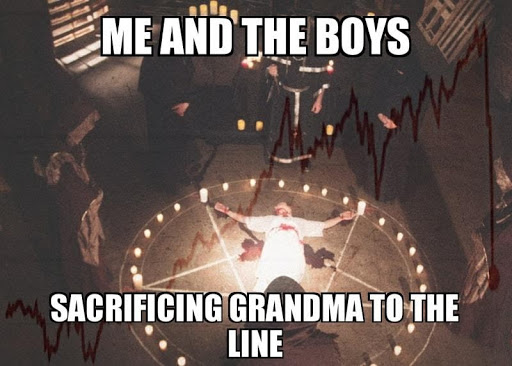 And why? Because it makes our masters marginally more powerful.

I have discussed the importance of focusing on material concerns instead of ideology (such as the nonsense of representation and “being seen”). But make no mistake: material well-being is a tool, a means to the end of living a full and good life. And maximizing material well-being does not necessarily maximize our spiritual well-being; in fact, I would argue, it will sacrifice many meaningful things at the “altar of growth” and GDP.

The most important part of understanding “work-life balance” more properly as “contribution-leisure balance” is to grasp one of the most profound sources of modern alienation:

For 40 hours a week or more, we are taken away from our families, friends, and community in order to do work that does not seem to contribute much at all. (And compensation seems totally divorced from the actual contribution being made.)

There is a scene in the movie “Margin Call” (think a more dramatic, better version of “The Big Short”) where Stanley Tucci’s character delivers a monologue to Paul Bettany about a bridge he built and the immense material impact it had on the lives of the people who used it:

Of course, the subtext in the scene and its context in the movie is that Tucci’s character feels that his time as an engineer—when he was poorly compensated compared with his job on Wall Street—was when he had more meaningful effects on the lives of people. There was an immediacy. He could see what he had done.

On the other hand, in our hyper-bureaucratic and obfuscated world, it isn’t particularly clear what we are doing. Do financial markets actually work toward “proper” capital allocation, or is it all just a game, divorced from its underlying purpose? (My guess is Tucci’s character would argue the latter.)

We are alienated from the impact of our labor. It no longer becomes clear what we are doing or why we are doing it. Is it any surprise over a third of Brits see their jobs as not very fulfilling or not at all fulfilling? Bullshit Jobs, by David Graeber (may he rest in peace), argues 40 percent of all jobs in America are B.S. And I think it’s fair to say that “revealed preferences” (the opioid epidemic, SSRI prescriptions, etc.) make it clear that number may be even higher.

And so, if we want to address the poverty of purpose and dignity that Robert Kennedy so eloquently described, we need to focus on building a society that truly allows for people to build lives worth living. It means focusing on a society centered on strong communities, families, close relationships with friends, etc. It demands a rejection of the atomistic focus on individual autonomy, and a balancing of individual autonomy against a range of other goods/values. There are many goods that when pursued too much can lead to bad consequences. That doesn’t mean they aren’t goods, just that they need to be kept in balance with other goods.

And this also means that we need an economic system that properly and fully rewards actual contribution. Our system certainly does no such thing. What that system would have to look like is still up for debate, but our theories of “value” and economics are so flawed that it is likely we will need to blow it all up and start over if we are to have any chance of achieving this ideal.

So, the trillion-dollar question: how do we better measure this success? Certainly, I do not trust most of our rulers to decide with what we should replace GDP. I believe the answer to this question comes in two parts:

First, explaining what it means to live a “good life.” There are many different ways to live a meaningful life, but I would argue that the most common and most sought-after ways center around two poles:

Second, we need metrics that provide ways to measure this. We know polls are unreliable. (And how exactly are we supposed to compare John Doe’s “7/10” rating on how close he feels to his in-laws with Jane’s “6/10”? Anyone here a psychic?) What we really need is to look for something akin to “revealed preferences.”

On the first point, strong relationships, looking at the rate of family formation and the persistence of those families is key. How many people are getting (and staying) married? How many children grow up in a two-parent household? And more than just structure, we need to look at how those households are functioning. How much time do parents spend with their kids?

Another rather disturbing trend is the increasing number of people (at least in America) reporting having few or no “close friends.” Calling this a tragedy is understating the deterioration of our social fabric that this represents.

What we have is a crisis of belonging. The Internet was supposed to connect us with people around the world and, in some ways, it did. But in doing so, it led to greater alienation, not less. It intensified the atomization and isolation that is such a terrible and pervasive part of our society.

On the second point, dignity, we need to look at the number of people who feel connected to their jobs. And, perhaps more importantly, we need to have jobs that are tied to concrete human needs and not just the pursuit of profit under a dubious claim that one is “helping efficiently allocate capital.” Tucci’s character in the YouTube clip above knew this.

Most of this piece was on this point of dignity, so I won’t stress it too much. But, I will note that it is important to remember that the dignity we feel from work must be tempered alongside the genuine need for strong relationships. If anything, a family-oriented individual should be fighting for shorter workweeks and more time to spend around their kids.

Another point on dignity: our lives, beyond work, need to feel dignified. Chowing down on seed oil-based slop and playing video games until 3 a.m. does not make for a dignified existence. We need to provide avenues for all people to contribute to society, and to feel dignified in doing so.

Now, what would a set of policies look like that could get us there? I’m not sure, but it’s a problem I’m working on and I hope you will join me in the process. Perhaps one day we can have a movement based around restoring meaning to life instead of endless circular debates about whether tax rates on those making $250,000-$399,999 should be 27.6 percent or 34.2 percent.

Editor’s note: This article appeared originally in a slightly different form at Substack.