Testosterone is a hormone that primarily regulates bodily functions such as libido, bone mass, fat distribution, muscle size and strength, and production of red blood cells and sperm. It plays a key role in the action of other hormones and has a strong effect on mood and behavior. It’s effect on human action may also exert a large influence on both who leads society and how it is led. Flaming Eyeball recently had a very good post on the decline of libido, marriage, and trends in family formation among Generation Z, which may prove to be an acceleration of an existing problem that arose among Millennials during the Great Recession.

And the result? An ever-increasing proportion of the American male population is fat, weak, unattractive, depressed, tired, and can’t “get it up.”

If testosterone levels continue their decline, the number of these dysfunctional men will continue to increase. And along with that will come an overall decline in marriage, family formation, fertility, productivity, generosity, safety—anything a strong healthy man can contribute to his family, his community, and his nation. 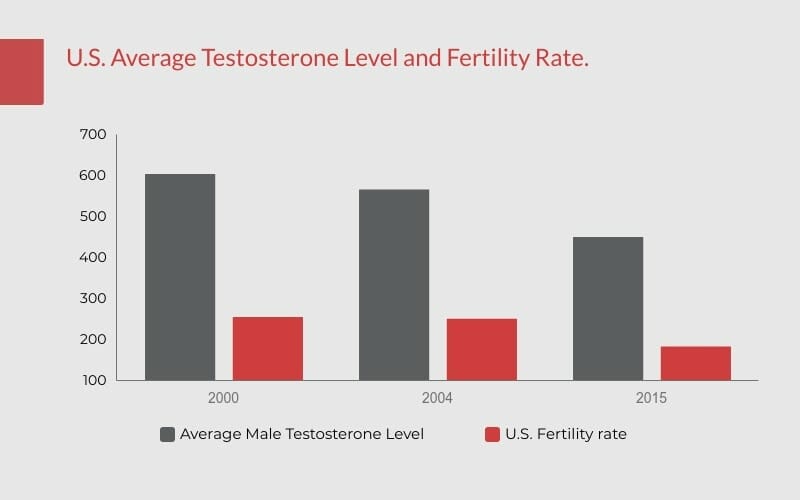 As with the rise of other chronic health disorders in America, this decline has been greeted with an air of disinterested apathy by our cultural and political elites. The media has covered it to the extent that they could generate alarmed clicks from anxious men, but the social, cultural, and political ramifications of this trend largely have been ignored.

Commentators on the Right correctly note the role economic conditions are playing in this decline in relationships and fertility, and improving these conditions so as to make family formation a material possibility for young Americans should be a key priority. But economic conditions do not tell the full story.

After all, Americans have exhibited high fertility under much more challenging economic conditions than we find today, and these trends were already well underway before the pandemic response nuked much of the independent American economy. The simple but uncomfortable reality is that the average young American’s health has declined to the point that they are lacking in both the sexual appeal and libido necessary to make sex, marriage, and procreation a common part of American life.

Much has been made of the “incel” phenomenon, but accompanying that has been the rise of the “volcel”—people who are voluntarily celibate, not through moral compunction, but because of the shortage of suitable mates. Quite simply, the decline in testosterone has left the average male weak, unattractive, and uninterested in dating and marriage.

At the same time, the factors leading to testosterone decline in men have not left women unscathed. Hormonal imbalances abound among young women as well, leaving many of them fat, skinny-fat, or overly muscular in an unappealing way. There are many healthy young men and women who have checked out of the dating market because finding a suitable counterpart has become a seemingly futile exercise—akin to finding a unicorn in a stable of pack mules.

So What’s Causing This, and How Do We Fix It?

There are so many different causal factors implicated in the decline of testosterone (and whatever the hell is going on with women) that you could just chalk it up to “life in the modern world.”

But one of the overlooked factors in this phenomenon has been the changes to the American economy since the 1970s. Many of the active, physical jobs either have been automated or outsourced, while the dawn of the computer age brought with it a marked increase in sedentary jobs, as well as a greater proportion of America’s workforce having to work in high-stress office environments with cultures driven by social aggression and politics.

These environments drive up secretion of the stress hormone cortisol, which results in lower levels of the estrogen-desensitizing hormone progesterone. This relative increase in estrogen dominance is not good for either sex, but men are particularly affected by it.

Declining testosterone levels could be tied in with the overall crisis of boys and men and the push by social engineers to curb masculine traits. Boys are falling behind girls in school performance. Fifteen to 24-year old boys have a suicide rate four times that of girls of the same age cohort. Only 39 percent of college degree recipients are men.

And while much is made of the so-called gender gap in income, the reality is that wage growth among female workers has been on a long upward trend while the median wage of a male worker is lower than what it was in 1972. While I don’t begrudge women any real advances that they’ve made, I don’t think that the effect of “gender equity” social engineering on men has done much to improve the lot of either women or men.

When the type of masculine behavior that leads to increased testosterone secretion—something as simple as punching a bully—is socially stigmatized and verboten, young men have fewer opportunities to develop their masculine personality, and therefore the biochemical pathways involved in those acts will atrophy.

Stress is another big factor, as the stress hormone cortisol lowers blood levels of testosterone. We all know of the negative health impacts of chronic stress. Work stress, family problems, anxiety—the causes of chronic stress are myriad.

But there are less obvious stressors as well. The ubiquity of blue-light emitting screens and fluorescent/LED lighting have resulted in significant disruption of normal circadian rhythms leading to a significant decline in sleep quality for the average person. Sleep deprivation can lead to a drastic reduction in testosterone levels. Other stressors can be the very things that people turn to when stressed: heavy consumption of alcohol and other commonly abused substances—with the notable exception of nicotine—can lead to a severe decline in testosterone levels.

Environmental contaminants also play a role. Glyphosate (the primary chemical component of Roundup, the most widely used herbicide in the United States), has been shown to reduce testosterone levels, alter testicular structure, kill testosterone-producing leydig cells, and interfere with pubertal development. Atrazine, the second most widely used herbicide in the United States, also significantly lowers testosterone, but even more alarming (and potentially related to the sharp rise in gender dysphoria) has been shown to cause testicular deformities and hermaphroditism in amphibians. These chemicals are used on crops like corn, where they are then fed to cattle and make their way into the meat, dairy, and water supply. (See the map below produced by USGS.)

Beyond agriculture, hormone disrupting chemicals have also made their way into a variety of products, from cosmetics like sunscreen and toothpaste to plastic water bottles and thermal receipt ink. 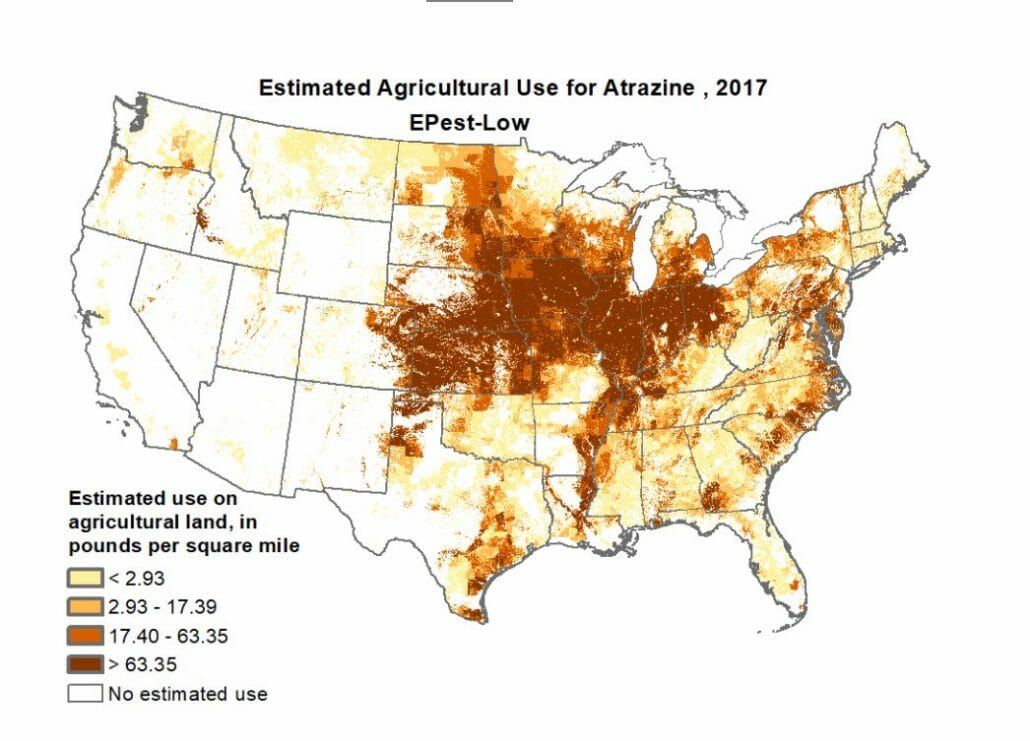 The role of diet in testosterone levels is not confined just to the presence of endocrine disrupting chemicals in the production process, but has to do with the types of foods we eat, too. The replacement of butter, lard, and tallow with industrial cooking fats like vegetable oil, soybean oil, and canola oil has been a disaster for human health. These fats, in addition to their pro-inflammatory effects, also lower testosterone levels. These fats are much cheaper to produce, but gained widespread usage in large part by the promotion of the myth that cholesterol is a dangerous substance that leads to heart attacks.

In reality, cholesterol is essential to good health—the key is to give your body chemically stable fats from which to make cholesterol. Cholesterol is the building block of testosterone and plays a key role in maintaining healthy cell membranes and immune function. (For a much more thorough discussion of cholesterol and improving your diet generally, see Dr. Cate Shanahan’s Deep Nutrition.)

Hormones rise and fall in response to you and your body’s needs. This is why I am deeply skeptical about the ingestion of pharmaceutical hormones, which tend to cause the given hormone levels to be rather chronically elevated. This chronic elevation can cause problems of its own through overstimulation, or the body may adapt and become less sensitive to that hormone.

One example of this can be seen with women who have had hysterectomies that included removal of the ovaries. They can no longer naturally produce estrogen and most opt for estrogen pills or patches as a “replacement.” But their risk of heart attack increases by 28 percent as a result, because the heart protective benefits of on-demand ovarian estrogen in women cannot be replicated with a daily pill.

For this reason, testosterone replacement therapy is probably a bad idea as anything other than a last resort. A first resort is to exercise, clean up your diet, soak up the sun, get plenty of sleep, and minimize stress. In my opinion, the best form of exercise for hormonal health is short, intense strength training workouts. High-volume cardio has a tendency to drive up cortisol levels which have a counterproductive effect. If you like running, short, high-intensity sprint workouts are terrific (compare the physiques of olympic sprinters with olympic distance runners). Yoga (or a good stretching routine) can also play a supporting role in this by decreasing stress and keeping your muscles flexible and in alignment.

This is a major public health issue and it should be treated as such. We ignore these issues at the peril of ourselves and our people, many of whom are suffering needlessly because of the government’s recklessness and corruption in dealing with health. But the political begins with the personal. If your hormonal health isn’t what it should be, you can and should improve it. You can be a lifesaving source of information for family and friends. And you can support health pioneers and traditional farmers by voting with your dollars as a consumer.