There is a significant power differential between Facebook and its users. Instead of merely providing an online platform to share photos, musings, and articles of interest to a circle of friends and followers, Facebook monitors user-generated content and reserves the privilege to remove it, restrict its dissemination, and even block a user’s ability to post or comment for a period of hours, days, or weeks (unaffectionately known as being in “Facebook Jail”). Without warning, Facebook may even disable an account, to deplatform a user.

Though I haven’t been subjected to “Facebook jail” (yet), a recent post of mine was flagged by Facebook “fact-checkers” as “false information.” My post summarized Tucker Carlson’s September 15 interview of Chinese virologist Li-Meng Yan, and is one of many posts on Yan’s allegations that Facebook has flagged. 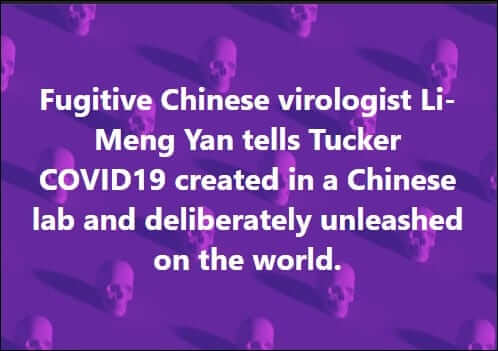 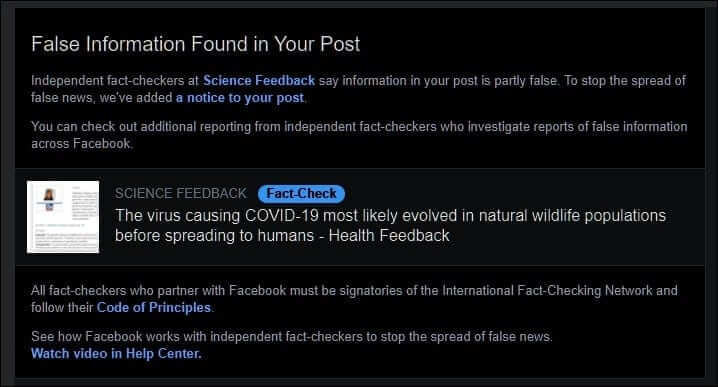 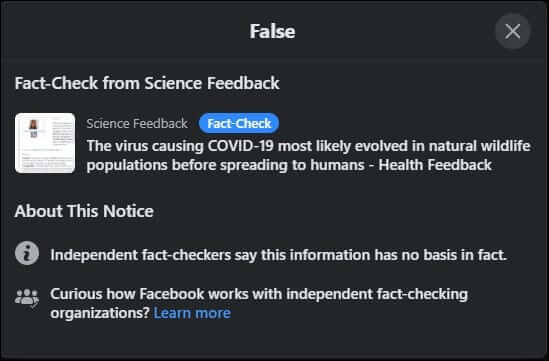 I stand by my post, which states facts that are demonstrably 100 percent accurate—even Snopes says so:

1) Li-Meng Yan is a Chinese virologist, whose work has been published in peer-reviewed journals and extensively cited by other researchers.

2) Li-Meng Yan is in hiding for fear of her life.

4) Li-Meng Yan told Tucker Carlson that she will soon publish a paper showing that the COVID-19 virus was manufactured in a Chinese lab.

5) Li-Meng Yan told Tucker Carlson that she can also prove that the virus was deliberately unleashed on the world by the Chinese government.

Quod erat demonstrandum (which is Latin for “Zuck you, Facebook”).

No Transparency, No Accountability

On September 23, President Trump held a roundtable discussion at the White House with Attorney General William Barr and several state attorneys general on protecting consumers from social media abuses. In his remarks, the president noted that “countless Americans are banned, blacklisted, and silenced through arbitrary or malicious enforcement of ever-shifting rules” and that this discussion “is focused on concrete legal steps to protect an open Internet and a free society, including steps to ensure the social media companies cannot deceive their users with hidden efforts to manipulate the spread of information.”

Many social media users believe that “fact-checking” is one of the tools used to censor them, and to manipulate the spread of information—in this case, information related to COVID-19 that does not fit the progressive narrative.

Facebook doesn’t describe the journalistic process that establishes the truth or falsity of a story, or the credentials of the person(s) evaluating stories on public health or other specialized topics. But if I were “curious how Facebook works with independent fact-checking organizations,” I could click a link (which led to still more links, like peeling back the layers of an onion) to learn more. Here’s some of what I learned:

We want to help people stay informed without stifling productive public discourse. There is also a fine line between false news and satire or opinion. For these reasons, we don’t remove false news from Facebook but instead, significantly reduce its distribution by showing it lower in the News Feed.

I am an experienced, award-winning health/medical writer; completed the pre-med course requirements in college; and have a master’s degree in science and medical journalism from NYU Polytechnic. Unless Facebook’s “fact-checkers” have equivalent credentials, they are not equipped to judge the accuracy of content relating to medical research and public health issues.

2) Facebook uses third-party fact-checkers who are certified through the nonpartisan International Fact-Checking Network in certain countries who rate content as being false, altered, partly false, missing context, satire, or true. These countries are specified on a page that provides information on how to dispute a fact check rating. The third-party “fact-checkers” in the U.S. include: Factcheck.org, PolitiFact, Science Feedback, and Reuters Fact Check.

If Facebook’s “fact-checkers” are unable to distinguish the difference between an objective report of an event (Yan’s interview) and an opinion about that event (analysis of what she said), they should find another line of work.

3) The International Fact-Checking Network is run by the Poynter Institute, a non-profit journalism school and research organization located in St. Petersburg, Florida. Judging by the quality of the “fact check” on my post, the “counselors” heading up the effort seem to have forgotten what just-the-facts reporting looks like.

I learned about real fact-checking at Time  in the waning days of the “Mad Men” era, when the company was Master of the Media Universe. Anyone who’s been in journalism long enough knows how notoriously nit-picky Time  fact-checkers were. Every detail was substantiated. For instance, if a reporter mentioned in an article that an interview subject drinks black coffee in the morning, the fact-checker would zero in on that detail and ask how he (in those days, the reporter was usually a he) knows that. If the reporter said he conducted the interview over breakfast, he would’ve had to submit an itemized restaurant receipt. Unless Facebook’s “fact-checkers” have been trained as rigorously as the legendary Time  fact-checkers, they are not trained well enough.

“Libel” is publication of a written statement that damages the reputation of another party.

Social media platforms have a broad legal exemption from libel law under Section 230 of the Communications Decency Act and are not liable for user-generated content that is libelous. However, I believe a case can be made—paging Harmeet Dhillon—that when Facebook publishes a rating about the truth or falsity of a post, it is not merely a conduit for content but is creating content as a publisher. Further, Facebook also exercises editorial control as a publisher when it selects content allowed to be published on its platform or removed.

I believe that labeling my post “false information” libels me by demeaning my credibility as a health and medical writer. My profession holds me to an ethical standard of truth and accuracy that Facebook is publicly accusing me of violating. So too, when a medical doctor or scientist posts an expert opinion or an article he or she has authored that is labeled “false information.”

Facebook offers a process by which a user can dispute a rating, which involves sending an email to one of its third-party fact-checkers. If truth is not a defense to libel according to this “fact-checker,” I can always exercise the option of sending a “lawyer letter” demanding Facebook cease and desist labeling my post “false information,” and demand a retraction of their faulty fact check.

During the roundtable discussion at the White House, the attorney general reported that, at the president’s direction, the Department of Justice sent proposed legislation to Congress that reforms Section 230 to “require greater transparency and accountability when platforms remove lawful speech,” and to let users “pursue civil claims against online platforms that engage in bad-faith censorship.”

Congress is consumed with President Trump’s nomination of a new justice to replace Ruth Bader Ginsberg on the Supreme Court, so other important matters like pandemic relief for idled workers and censorship relief for social media users will languish for the foreseeable future. But if the proposed legislation is enacted, it may become easier to dispute arbitrary and inconsistently applied “community standards” for user-generated content, and to force a reversal of heavy-handed tactics like politicized fact-checking and shadow banning to censor thought and squelch information that Silicon Valley tech titans don’t think you have a right to know.