The media has riled Americans into a frenzied panic over COVID-19.

Concerned, corrupt, and ignorant politicians alike have used fear of COVID-19 to institute neurotic “social distancing” policies. Tens of millions of Americans are now prohibited from working, from seeing loved ones, from worshipping—the nation’s greatest churches were empty this Easter.

America’s government has suspended the freedoms enshrined in the Constitution and destroyed the economy. And for what?

Nothing. New data reveals that COVID-19 is not the pandemic we were promised.

The media compares COVID-19 to the Spanish Flu, which killed 50 million people in the wake of  World War I. They warn that one-in-twenty people who are infected could die—millions of lives are at risk.

This is a pack of lies.

Iceland was the first Western nation to conduct mass testing for COVID-19. Their tests revealed not only that the infected population was much larger than initially suspected, but that the majority of infected people were asymptomatic. In other words, most did not even know they were sick. A recent study from Germany reached a similar conclusion, and estimated that the illness’ mortality rate is 0.4 percent—apparently COVID-19 really is akin to a bad case of the flu.

Italy is also backtracking on its initial figures. The Minister of Health recently stated that only 12 percent of the alleged COVID-19 deaths “have shown a direct causality from coronavirus.” More recently, research has shown that the average age of these casualties was 79.5 and 99 percent had pre-existing conditions.

This dramatically increases the size of the infected population and therefore decreases COVID-19’s estimated mortality rate. Plugging this figure into New York’s population reveals that the illness’ actual mortality rate is approximately 0.59 percent in New York.

Lastly, mass testing from Los Angeles County shows that 4.1 percent of the county’s population—approximately 442,000 people—have already been infected. This is far greater than the number of “confirmed cases,” which stood at just 13,816 at the time the tests were conducted. Using the new figures reveals that COVID-19’s mortality rate is approximately 0.15 percent in sprawling L.A. County.

In comparison, seasonal influenza’s mortality rate is between 0.1 and 0.2 percent—and it used to be higher before the advent of a seasonal vaccine. Our grandparents did not shut the nation down every year for fear of the flu. Neither should we.

But what of the anecdotal evidence of hospitals being flooded with COVID-19 patients? What of the “mass graves”? If COVID-19 is just the flu, then why is the healthcare system collapsing? One word: efficiency.

Take for example a hospital that admits an average of 1,000 people every day. This varies over the course of the year. In summer, 900 people are admitted daily. In winter, 1,100 are admitted. In order to avoid maintaining extra overhead the hospital administrators equip the hospital to deal with 1,100 daily admissions.

COVID-19 is essentially the flu.

A Cure Far Worse Than the Disease

Although COVID-19 poses a negligible health risk to healthy individuals under the age of 50 the government shut down much of the nation. Not only does the quarantine prevent our population from developing the herd immunity we need to keep old folks safe—which is why Sweden refused to quarantine—it has completely destroyed our economy.

Already well over 30 million Americans have lost their jobs. Meanwhile, the Federal Reserve estimates that up to 47 million could be out of work by summer—fully one-third of the entire labor force. Of course, this does not include those untold millions whose hours have been cut dramatically. They are rotting in statistical limbo. 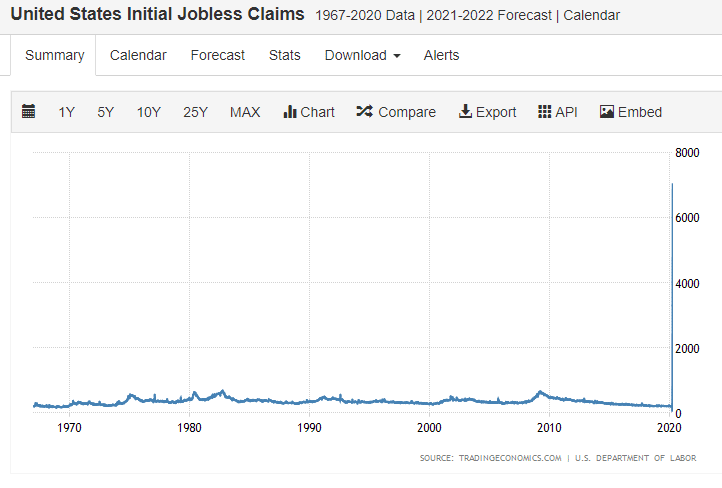 Mass unemployment will ravage middle America. Consider that even before COVID-19, fully 78 percent of workers lived paycheck to paycheck, while 30 percent of adults have no savings whatsoever. How are they supposed to survive?

Strapped for cash, tens of millions will turn to Uncle Sam for help. Many will receive welfare—and on welfare they will stay. Welfare is addictive. This is why the Rust Belt votes for Democrats to this day, and it is why the government programs established by Franklin Roosevelt’s New Deal continue to limp on nearly a century later.

Those who do not qualify for assistance will have no choice but to borrow from the banks to feed their families. The middle class will be shattered. Millions will work away their years, decades, and lifetimes to pay back the banks.

The quarantine will decimate small businesses. It already has. Local bakeries, restaurants, and mom-and-pop shops cannot afford to weather months of closures and minimal patronage. Meanwhile, global retailers and online stores will slink onwards, scathed but not slain. How many people will lose their family legacies, and communities their economic backbones?

Finally, economics is a means to an end—not the end itself. The social implications of the quarantine cannot be ignored.

Job losses, financial stress, and social distancing are breaking apart marriages—China has already seen a massive surge of divorces. America will follow suit. This may do enormous damage to America’s social fabric.

Anxiety, fear, poverty—hopelessness—will push many to commit suicide. Every year 50,000 Americans take their own lives. COVID-19 will drive thousands more past the point of no return. Consider that attempted suicides have already increased by 150 percent in Great Britain. In America, the Well Being Trust predicts that the government’s insane response to COVID-19 may push some 75,000 people to take their own lives.

Furthermore, millions of Americans may turn to drugs in their despair. We have seen it before in the Midwest: factory closures led to unemployment, unemployment led to addiction, and addiction led to death. Last year nearly 70,000 Americans died of overdoses, of these 70 percent were killed by opioids.

America’s government appears prepared to do whatever it takes to stop COVID-19—but is it prepared to scrub the fallout?