The radical social distancing and stay-home measures in place around the United States to prevent the spread of coronavirus may save 2 million lives, according to new scientific research.

Bill Gates-funded researchers at the University of Washington, who are advising the nation’s governors and hospitals, forecast that COVID-19 deaths will peak at 81,000 if social distancing measures continue to be used.

The 81,000 does not include an estimate of second-wave deaths next fall and winter, but the University of Washington researcher says there won’t be a second wave of deaths in the fall and winter if community transmission can be stopped through current social distancing.

Is all of this good news?

“If you’re coming from that Imperial College study that found over two million would die, it’s good news,” said Christopher J.L. Murray, who heads the 500-person Institute for Health Metrics and Evaluation at the University of Washington.

But, Murray added, “the assumption is we will keep in place social distancing measures, including school closures, non-essential business closures, and stay-at-home orders until the end of May.”

The forecast of deaths peaking in mid-April is similar to one by a modeler for the Centers for Disease Control, Ira Longini, professor at the Center for Statistics and Quantitative Infectious Diseases at the University of Florida.

Murray’s Institute received a $279 million 10 year grant from the Bill and Melinda Gates Foundation, and is one of the largest health care and disease modeling teams in the world.

The U.S. and state governments took dramatic action on coronavirus two weeks ago in part due to the findings of an Imperial College, London study.

The models used by Imperial researchers suggest that over 2 million people would die from COVID-19 in the United States if the disease were allowed to spread unchecked.

Won’t politicians feel pressure to end radical social distancing measures, such as by Easter, as President Donald Trump has proposed? 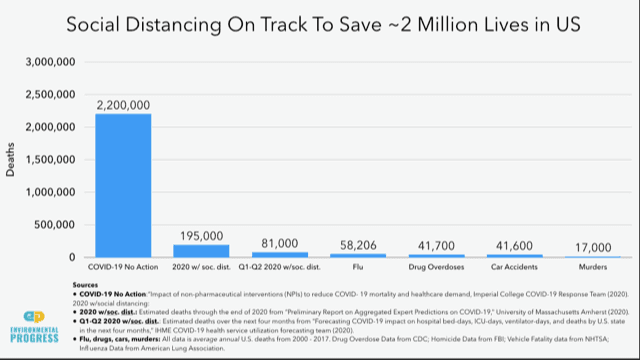 “We estimate a peak of deaths right around Easter,” he said, “After that, many governors will be very reluctant to have the risk of a resurgence. And if you stop social distancing too soon there will be a resurgence.”

Murray says he will update his model every day. “We were talking with one of a governor’s groups in a state last night where they had a big bump in deaths,” said Murray, “more than expected. And so we want our forecasts to reflect the new trends.”

“We are spending trillions on the economic consequences of COVID-19,” Murray said. “We should spend billions to protect against another shock like this, which means making sure we have a mass testing scheme so anyone coming into the country, anyone who is sick, and general testing of the public.”

Imperial’s model is different from Murray’s model, he explained. Imperial’s model is “like measuring the impact of a fire on a town if nobody changed their behavior—everybody would be burned in their homes—as opposed to how many would die if everyone runs away when the fire is coming. Some will still die but most people would change their behavior.”

“Our model is meant to be real-time,” Murray said. “We fit a statistical curve to the available data and to the variables that explain the curve, and the key variable is social distancing.”

I asked Murray if one model was better than the other.

“Both are legitimate,” Murray said. “The first model is a great call to action and super useful. But if you’re trying to help the hospital and fire-fighting service, you need our model.”

But hadn’t the Imperial model been too apocalyptic and alarmist? “There’s a value to apocalyptic alarmism because as we saw some places were slow to do anything,” Murray said.

“And there are still some countries that are slow to do much,” he explained. “I’ve been on the phone with political leaders in Europe who still don’t have stay at home orders because they are worried about the economic effects.”