This week is the Jewish holiday of Hanukkah, commemorating the victory of the Maccabees over the Greek king Antiochus IV, and the rededication of the Temple after he had defiled it.

In addition to the eight days of presents and the menorah and the Great Latke/Jelly Donut controversy, there’s the time-honored game of dreidel.

It’s a game played with a four-sided spinning top, and since Judaism is all about education, it’s there to teach the kids how to gamble. (And you thought “Uncut Gems” was fiction.) There are four different letters on the four sides of the dreidel, and depending on which side comes up, you either do nothing, take half the pot, take the whole pot, or put a piece of candy into the pot.

And since Hanukkah is a light, upbeat holiday, nobody asks why we play this game or what it has to do with beating the tar out of Antiochus. Instead, the big question about dreidel is, “Can I cheat?”

Of course, the answer is, “No! You can’t cheat. We’re supposed to be representatives and avatars of ethical monotheism. How would that look?”

OK, so maybe not cheat, exactly, but is there some way to gain an advantage without cheating?

There’s a possibility, yes. I remembered an old article in something called the Journal of Irreproducible Results, by G.E. Dallal and A. Must, showing that spinning the dreidel left-handed gave different outcomes from spinning it right-handed. If I tried the experiment, would I see the same thing?

Now you might think that the very name of the journal would preclude such a result, but the authors assured us that they actually ran the experiments, so it was worth a try.

Fortunately, my wife collects dreidels. A fair number of these are purely ornamental or fragile, so if I had used them, the game wouldn’t be “Can you win by spinning a dreidel left-handed?” but rather, “How do I dispose of Joshua’s body?” But among that collection, there were three made of different materials and construction that might actually be used in a game: 1) a traditional plastic cast dreidel, 2) a wooden dreidel, 3) and a metal one that your spin in its stand. 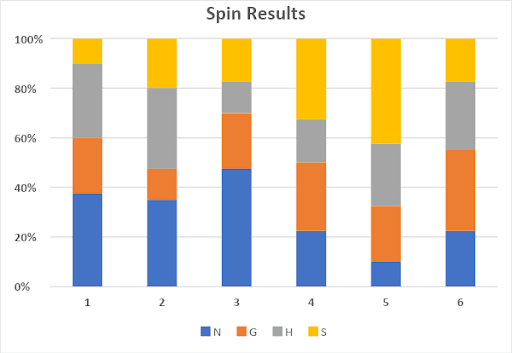 N, G, H, and S are the English-language equivalents of the letters on the dreidel. Just looking at the results is enough to know that spinning the dreidel left-handed or right-handed makes a difference in the likely outcome. Dreidel 3, for instance, the metal one, seems far, far less likely to give you the dreaded Shin (put one in) outcome while spinning left-handed.

How do we know that these results are real, and not simply random variation? There’s a statistical test for exactly that, called the χ2, or Chi-Square test.

And here are the results: 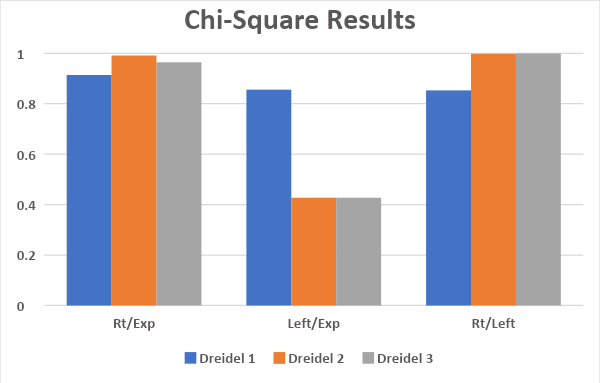 We are more than 90 percent sure that a right-handed spin with each of the dreidels is not fair, that it’s biased towards or away from one of the letters, just as surely as Democracy Dies in Darkness. On the other hand, so to speak, only the first dreidel, the cheap plastic one that everyone actually uses to play this game, is also biased if you spin it left-handed, to 85 percent certainty. The other two, the wooden and the metal one, are more than likely fair.

That’s nice, but what really matters is this: if I can spin the dreidel left-handed, do I get a different result? And here the answer is a resounding “Yes!” We are more than 99.5 percent confident about both Dreidels 2 and 3, and more than 85 percent confident (which really isn’t that confident) about Dreidel 1.

So the lesson is clear: if you’re hosting a Hanukkah party, and you test your dreidels beforehand, and you can reliably spin the dreidel in reverse with nobody noticing, you can pick a dreidel that will deliver you the goods. That seems like a lot of work and sleight of hand for some chocolate coins that taste like wax, but nobody’s judging.

By now, most of you are probably thinking, “Man, this Sharf character has way too much time on his hands.” To which I reply: “Every last one of you would happily sit there for hours on end playing dreidel, and losing chocolate shekels one after another, never realizing that someone had rigged the game.” At least now you know what to look for.

And, of course, Happy Hanukkah!