Perhaps you saw this before the tweeter took it down: a badly photoshopped image purporting to be U.S. Representative Elise Stefanik (R-N.Y.) with a nasty look on her face, flipping the bird while former Ambassador Marie Yovanovich testified in the House impeachment proceedings on Friday. 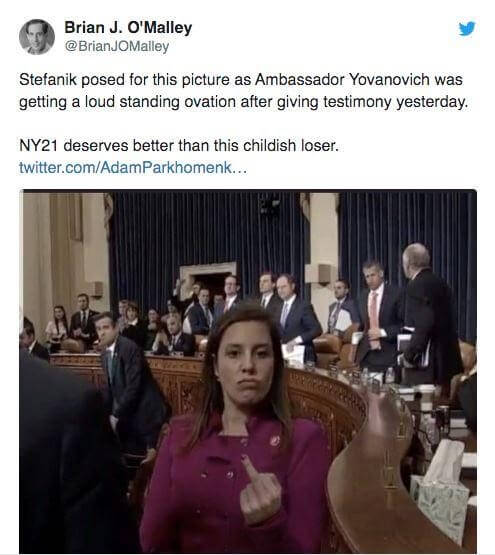 O’Malley apologized later, after video showed that the GOP representative from upstate New York did no such thing, and after others noted that the pixelation was fuzzy, the lighting was wrong for an actual image capture, and Stefanik wasn’t, in fact, wearing nail polish that day. Nonetheless, O’Malley had spent some time insisting that he uses Photoshop daily and had reasons to believe the image was real.

When the image was proven to be altered, many on the Left insisted it was nonetheless credible because it showed her sullenly pouting as she left the room.  Look at the faces behind Stefanik. What expression is on them? Is hers any different, other than being prominent and side lit, creating a stronger contrast that highlights her emotion at the moment?

And what emotion is that? How can you judge?

Here’s an interesting experiment: stand in front of a mirror and, as well as you can, mimic her expression. Don’t dwell on the context, just adopt as well as you can her body posture and facial expression.  Mimic those of the men behind her. Mimic hers again, striding with determination up to the mirror.

How do you feel?

Why do you feel that way?

The answer goes deep into our neural structures as humans, and in particular, to the amazing brain structure called our mirror neurons. We are deeply social beings, with infants that are deeply dependent on adults for a long time. So knowing how others are feeling isn’t a nicety, it’s a necessity for survival. When we see other people, and in particular when we see their expressive faces, our mirror neurons recreate inwardly the neural patterns that we would have if we ourselves were showing that facial expression. Often we actually do mimic the expression outwardly as well.

A stranger smiles benignly and non-intrusively as we pass on the sidewalk. We instinctively smile back. A baby coos and we exaggerate the coo in delighted response. A spouse or co-worker marches our way with a furious expression and stiff posture and, unless we work hard to shift his or her posture and attitude, pretty soon we’re responding angrily ourselves.

Sometimes an expression seems “off” to us. Something doesn’t jibe between the face or posture or tone and the words that person is saying. So we don’t trust him, we inwardly or outwardly back away from her.  Actors and con artists know this, so they practice extensively to present a coherent outward appearance. And because of the deep role that mirror neurons play, if they’re good enough we believe what they’re selling.

Mirror neurons are incredibly powerful because they are bidirectional: the same neurons we use to control our own expressions are used to interpret those of other people, and then to reflect them back. That is the basis for social trust.

And it’s the basis for effective deception. It’s why artfully photoshopped images and computer-generated deep fakes can promulgate false narratives far and wide.

But that doesn’t fully explain why so many lousy fakes are gaining currency. To understand that we can look at social media where an image or the sound of a video is enough to convince those who don’t look deeper or ask questions—and who are already wanting to believe.

What high-minded political theory discussions miss about these subjects is the centrality of what researchers call embodied cognition in our lives. Embodied cognition, a theory for which there are good fMRI and other evidence, posits that for all but the most abstract concepts we process words and ideas by rapidly and partially recreating in our neural systems the actual sensory and emotional signals we associate with a powerful instance of that idea. If you read “chair” your brain doesn’t process a dictionary definition—it simulates the physical experience of sitting in a chair that is particularly salient to you at that moment. (Or if you’re in a truly dreadful committee meeting, the word might conjure up the officious person at the head of the conference table.)

So when a leftist who wants to believe that Stefanik is a true bitch because that leftist is pissed that she exposed a key lie in Yovanovich’s testimony, that person need only read O’Malley’s tweet and briefly glance at the image to be convinced. His words prime the reader’s brain to experience the image as both real and reinforcing what the leftist already believes, or at least wants to believe.

Embodied cognition and mirror neurons explain why true believers eagerly embrace deceptions. But such believers aren’t the whole audience for these fakes, or for the extended, farcical, corrosive, and poisonous fakery that is playing out in the House right now. Polls and my own discussions with many independent voters suggest that the Democrat impeachment strategy is backfiring badly. President Trump is rebounding in the polls, while the Schiff strategy drones on, guided only by focus groups in key states as the basis for the charges to be laid at the president’s door.

I blame it on Botox.

Now, I don’t know if Adam Schiff has had the procedure. But Nancy Pelosi clearly has, and it is ubiquitous in certain coastal circles. So too are deep facelifts. Interestingly, these procedures partially freeze facial muscles in pursuit of an artificial image of youth.

“Every man over 40 is responsible for his face,” Lincoln reportedly said. Our faces naturally reflect years of characteristic expressions as we age.

But what happens when your facial muscles can’t mimic the expressions of others or even fully express your own feelings? When your mirror neurons cannot confirm to you what others are feeling? When you cannot enter into their experience vicariously?

And when you have no broader personal experience with those other people, and people like them to inform your instincts and evaluations. People who live in “flyover country.”

You evaluate situations via your embodied cognition, informed only by your immediate experience and the people just like you.

We’re seeing the results play out before our eyes.