Imagine a homeless man. Does he have a long, frazzled beard and unkempt hair? What do his clothes look like? Probably ratty and full of holes—moth nests in the pockets. Maybe he has a shopping cart full of cans and a mangy dog named “Rusty.”

Although culturally ubiquitous, this characterization of the grizzled old hobo is profoundly misleading. In reality, most of America’s homeless people are young and healthy. Many attended college and work full-time jobs. They usually have permanent mailing addresses. Who are these people? Millennials.

Estimates suggest that 14 million Millennials still reside in their childhood homes. Why? Some prefer to live at home while they attend college. Others are lazy. But most cannot move out because rents are too high and houses too expensive. They are literally homeless—and millions would also be unsheltered were it not for their parent’s generosity.

How did it get to the point where an entire generation of Americans cannot afford to live where they were born and raised? Where millions must choose between remaining wards of their parents or leaving their friends and families behind in search of affordable accommodation—effectively becoming refugees in their own land?

The overwhelming majority (88 percent) of Millennials say they want to buy a home. Yet, just 4 percent believe they will be able to so in the coming year. Why? They cannot afford it: 72 percent say they cannot afford a home mortgage, while 62 percent say that the down payment is the biggest hurdle. This despair is reflected in generational homeownership rates.

Currently, 32.2 percent of Millennials own homes, compared to 60.4 percent of Gen-Xers and 75 percent of Baby Boomers. This alone is unsurprising: Millennials are younger and thus have had less time to save. But what’s interesting—and alarming—is that Millennial homeownership rates are far lower even when correcting for age differences.

Meanwhile, the Millennial homeownership rate for this age group is just 37 percent. In short, Millennials are 8 percent less likely to own a home than were their parents and grandparents at the same age.

While this may not sound like much, we must remember that Millennial homeownership rates are buoyed by banks (at the government’s behest) who offer effectively negative interest rates on mortgages—they literally pay Millennials to buy homes. If Millennials needed to pay the 10 percent interest that Boomers “enjoyed,” I suspect their homeownership rate would drop precipitously.

On top of this, Millennials are also far less likely to rent than were previous generations. As such, homeownership rates only tell half the story of Millennial dispossession.

Although Millennials clearly want to buy homes, they cannot. Why? Houses are too expensive.

This is in stark contrast to current prices. In January 2017, the median sales price for a new home was $317,400. This is 5.6 times the median household income of $56,516. In short, houses are 73 percent more expensive today (in real terms) than they were in 1973. This is the primary reason why disposable income has actually declined in America since the 1970s—not just for Millennials, but for all Americans.

Furthermore, it was easier for previous generations to save money for a down payment. Consider that the rate of return on a 10-year Treasury Bill in 1973 was 6.46 percent. Today, the rate is just 1.72 percent. Lower interest rates, combined with the fact that the price of shelter is increasing faster than inflation, is impoverishing our people.

Lastly, housing prices have not increased uniformly across the nation. In fact, they have actually decreased in those vast swathes of America which have suffered globalization-driven economic collapses. Thus, housing and rental prices have increased by much more than 73 percent in areas where Americans can actually find work.

Clearly, the Millennial generation has been dispossessed by high housing and rental prices.

The Source of the Nile

Since 1965, more than 45 million people have immigrated legally to America. During the same period, at least 20 million illegal migrants settled in America. Millions more arrive every year. 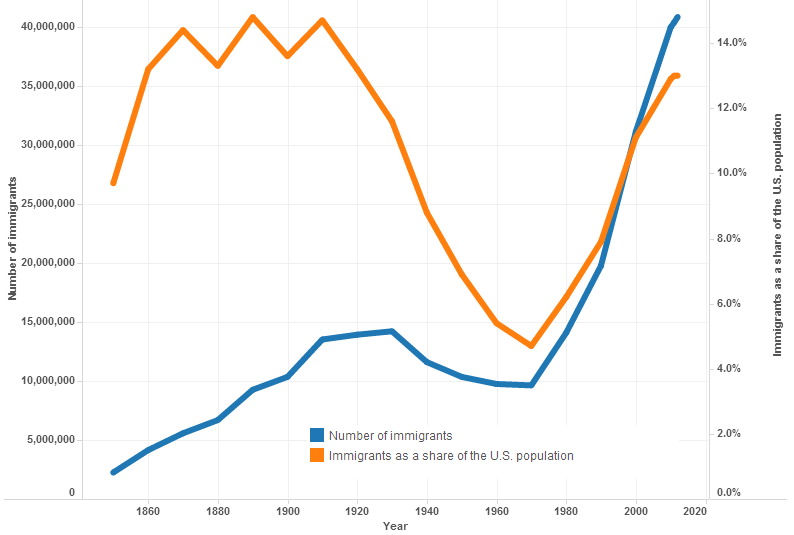 The scale of this mass migration is unprecedented in human history, and its consequences are not fully understood. But one thing we do know is that migration drives-up housing prices. How?

Migrants provide virtually unlimited demand for housing. This basic problem is compounded by two issues. First, the housing supply is relatively inelastic because as it takes much longer to build a home than to inhabit one.

Second, housing is a relatively scarce commodity since there is only a finite quantity of desirable land. Consider that the vast majority of immigrants settle in a select few metropolitan areas. Further, immigrants usually settle in areas already populated by their diaspora—they self-segregate, and in doing so cluster in relatively small areas which are not able to absorb or disperse their economic impact.

For example, California alone is home to more than 10 million immigrants. This works out to 26 percent of the state’s population. Meanwhile, immigrants comprise 22.9 percent of New York state. This explains why 17 of 25 of America’s least affordable housing markets are in California and six are in New York.

A number of academic studies demonstrate that immigration indeed raises housing prices and rents. Libertad Gonzalez and Francesc Ortega in a 2013 study found that immigration into Spain caused 52 percent of the overall increase in Spain’s real estate market.

Another paper published in 2012 by Canadian researchers Ather Akbari and Yigit Aydede found that immigration raised housing and rent prices in Vancouver, although the effect was not large. The authors postulated that the unexpected minor impact may be due to native residents leaving neighborhoods with high immigrant rates—“white flight.”

Abeba Mussa, Uwaoma G. Nwaogub, and Susan Pozoc tested this theory in a 2017 paper. Their findings were startling: for every 1 percent that immigration increased the population in a metropolitan statistical area (“MSA”), rents in that area increased by 0.8 percent. Additionally, domestic out-migration caused rents in neighboring MSAs to increase by 1.6 percent on average.

This effect was magnified when looking at housing prices: housing prices increased by 0.8 percent for every 1 percent immigrant-driven rise in population in the destination MSA, but by a whopping 9.6 percent in surrounding MSAs. In this way, immigration not only raised rents and house prices, it primarily raised them for native-born Americans!

Millennial homelessness and unaffordable housing are some of the biggest problems facing America—but no one is willing to speak frankly about it.

The Left acknowledges that rents are “too damn high.” But because immigration is their Golden Calf they are only willing to entertain cosmetic “solutions” like rent control—solutions which have harmful iatrogenic effects.

The Right usually ignores the problem. If a solution is offered it invariably takes one of two forms. First, Millennials are told to “pull themselves up by their bootstraps.” This is obviously unhelpful advice: Millennials are drowning in a sea of 65 million immigrants and their 30 million children. Further, a large fraction of America’s blue-collar jobs has been shipped to China and Mexico.

There was a time in America when a high school graduate could get a job that paid enough to allow him to buy a house and support a stay-at-home wife and three children. This is impossible today. In fact, I know many young lawyers who cannot even afford to buy an apartment—much less have children. In essence, Millennials are all out of bootstraps.

The second “solution” is for Millennials to move to cheaper locations—to leave the dead-end town where they were born and seek prosperity in the wide world. This is not only stupid, it’s immoral.

To begin with, housing is cheap for a reason—usually, because the neighborhood is infested with degenerates or the economy is toast. Who cares if you can afford a home if you risk getting shivved in your driveway? Who cares if the rent is cheap if you can’t find work?

Beyond that, telling Millennials they need to move away from their place of birth is immoral.

People are not merely individual consumers. They are part of something far greater. They are members of a family, a community, and a nation. What does it profit America to separate sons from their fathers and infants from their ancestors’ graves—to uproot an entire generation—to steal from our youth their sense of home and belonging, and replace it with restless anomie?

Immigration is raising housing prices. The solution to this problem is not to further atomize America by encouraging a mass exodus of Millennials from their hometowns in search of cheaper rents. The solution is to cut the immigration rate and enforce existing deportation laws.

The solution is to put Americans—and America—first.