Almost 20 years ago, I was at a club dancing with a girl I didn’t know. She was performing a kind of dance popular at the time (and perhaps today), which involved intense contact between her rear bumper and my front bumper.

The woman at the club never asked me for permission before engaging her rear thrusters. To make matters worse, she was white and I am black, so I may have been the victim of a hate crime.

As the co-author of a paper with a student of Dartmouth’s president, I was disappointed with President Phil Hanlon’s response to the allegations against brain scientist Todd Heatherton.  I hope Heatherton sues Dartmouth College and Simine Vazire, the woman who accused him of touching her derriere at a conference in 2002. She was not a member of Dartmouth College.

Women never lie? Ask Emmett Till, mutilated and murdered on the word of a racist woman who admitted later that she lied. Ask Brian Banks, jailed for years on a rape charge; his accuser also said she lied. Ask “Jackie” at the University of Virginia, who lied that she had been gang-raped at a fraternity party. UVA’s gullible president, shamefully and foolishly acting on that lie, immediately suspended all fraternities.

Now, every accidental brush from decades past can cost someone his job? I’m not sure how Dartmouth expects to “investigate” the claim against Heatherton. It was an alleged touching in public 15 years ago, obviously very brief, if Vazire is not lying.

I would also like to know what rule would have been broken even if the allegation were true. A Dartmouth or NYU professor must have acted like Mother Teresa at all times in his past with all persons?

Strange Justice
Suppose Dartmouth’s Professor Doredumble had gotten into a fistfight 20 years ago with someone at a Spice Girls concert. If the other pugilist decided to write a Facebook post about it now, would the president of Dartmouth be commenting on it? Suspending Professor Doredumble, possibly firing him?

If Doredumble were an ex-con, released from prison 25 years ago, and Dartmouth tried to sanction him 25 years later for the crime that had sent him to jail, I think almost everyone would consider that unacceptable and Doredumble actually would be able to sue.

Heatherton’s department should stand up to the president and stand up for its own professors, not for a professor at another university who may have an ax to grind for completely unrelated reasons (recall “The Cask of Amontillado”). She may have a poor memory, or she may have just imagined herself to be more irresistible than she actually was.

“But touching is assault!” the harridans will shriek. I suppose tapping someone on the shoulder is technically assault. The problem is, for at least the last four decades, it has been established that the mating ritual (or “courtship”) can involve some type of physical contact. Watch any number of movies from the 1940s and 1950s (or take another look at the famous World War II Life magazine cover) and see actions that would get the men apologizing on national television today; but even contemporary television (including feminist favorite “Supergirl”) will show you women leaping on to men to kiss them without asking for permission first.

Therefore it is unreasonable to allow a tiny minority of pundits to rewrite the rules of the mating ritual and pretend that their new rules have been in force since time immemorial.

Sexist Double Standards
You’ll have trouble finding a woman who wants the man to ask if he can kiss her. When the muscular bouncer at the club literally picks a woman up and takes her back to his apartment (this from an actual New York Times article), she dates him for four months. When it’s someone who looks like Josh Gad (without the money), it’s assault. “Saturday Night Live’s” harassment PSA with Tom Brady lampooned this adroitly.

When the same woman will tolerate, even desire, the same treatment by a different man (Tom Brady), or when a different woman will tolerate the same behavior from the same man, then it makes no sense to criminalize that behavior. I remember reading an account by a woman who said that, when she went to Italy with her friends in their 20s, they didn’t like the Italian men touching them; when they returned in their 50s, they were angry that the Italian men didn’t touch them.

(Google “invisible women.” In one essay, a woman “jokes” about how she wants to assault a man for noticing her 21-year-old dau

ghter but not her; note that joking about assaulting a man is perfectly acceptable in our society, among other misandrist double standards.)

Recently I saw a man greet a fellow college student in the quad by hugging her and dragging her backward. I doubt that she verbally consented to this in advance; I am also pretty sure she didn’t mind. (Feminists would tell us that the woman was only faking her squeals of delight because she was afraid her male friend was going to rape and murder her before his next class.) Yet, technically, this was assault.

It hurts actual assault victims to water down the definition so much that an able-bodied woman in her 20s can accuse the then-89-year-old President George H. W. Bush, wheelchair-bound, of “assaulting” her while his wife stood next to him and allegedly commented on the “assault” after it took place.

Similarly, feminists now classify asking a woman out multiple times as “harassment,” despite the fact that that’s exactly what Barack Obama (and many other married men) did. (For that matter, Michelle Obama née Robinson harassed Barack, since he was working under her at the time she decided to date him.) A minority of activists are trying to go back in time and order all women and men to obey them.

Girls Will Be Girls?
This is not “boys will be boys.” I sincerely doubt that Vazire can claim that she has always asked for permission before touching someone. It is commonplace for women to touch men’s forearms. A woman did this to me after I wrote the previous sentence. One commentator said it is absurd to use terms like “misconduct,” as if we are all in the army and there is a written handbook of do’s and don’ts.

Instead, our situation today more resembles an attitude of  “girls will be girls.” The reason men don’t write girls sonnets and bring them flowers anymore is that American women do not respond positively to that behavior, but evidently a large portion of young American women are responding positively to loutish male behavior that would have been unthinkable just a short time before feminists threw out the rulebook on social intercourse between the sexes. If they can reject the notion of “ladylike” behavior, then they should not be surprised that we can reject the notion of “gentlemanly” behavior. 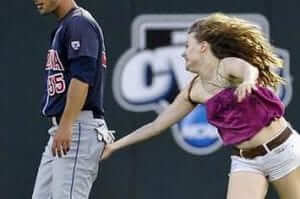 Here is a video of the comedienne and nude centerfold model (yes, of course her occupation is relevant) who accused Al Franken, in which she is touching a man, apparently without his consent, for laughs; here is what is supposed to be a hilarious photo of a girl groping a baseball player, without his consent. Spare us the gasps of “Oh, the humanity,” feminists.

And, again, we are assuming Vazire is not lying or misinterpreting a touch on the back.

Feminists wanted equality. A man making such an allegation would be treated as skeptically as Vazire (and then ignored). A man would have felt compelled to do something right then and there—as I did after a man put his finger on me and said, “You’re staring death in the face,” on the bus from New York to Boston (well, I went to the authorities right afterward; the police did nothing)—or, at any rate, a man would feel compelled to confront the perceived offender directly.

If women need men like fish need a bicycle, there should be no need to bring in the male president of Dartmouth. I guess feminists think women are strong and independent and superior to men in every way Mondays and Wednesdays but frail and timid and in need of male protection Tuesdays, Thursdays, and Fridays. Empowered feminists march in Slutwalks wearing dental floss from Victoria’s Secret on Saturday but want to be treated like delicate Victorian-era maidens on Sunday.

And this assumes Vazire is not lying. As one former Dartmouth student wrote, “We’ve entered the stage of presumption of truthfulness (on the part of the accuser). Accuse whomever you want of whatever you want in whatever time frame you please, and the media will believe you, especially if you accuse a man with some power (defined loosely).” 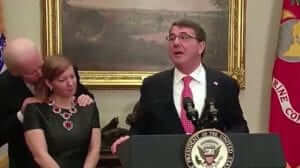 Professor Heatherton should point out how his accuser wrote him asking him to look out for a prospective female graduate student—as a woman would if she had been assaulted by that man. He should hire the law firm of Andrew Miltenberg, which has won several cases for men falsely accused or improperly treated by college administrations biased towards women. The biggest mistake Professor Heatherton can make is to remain silent or apologize for something that may not have happened, even though that is what his current lawyers will tell him to do. Just compare Bill Cosby’s silence to Alan Dershowitz’s threat of a countersuit in response to allegations. Only one has his reputation still intact.

The response to this essay likely will be a witches’ brew of the terms “victim-blaming,” “slut-shaming,” “rape culture,” “rape apologist,” and “mansplaining,” if not actual false accusations of harassment and rape─the usual feminist shaming tactics designed to squelch rational debate. Don’t fall for it. The feminists will also curse a lot about this essay, to underscore the point that they should be treated at all times like ladies.

As for the feminists who will comment that I am a bitter man who can’t get a woman (except the grinding girl─she and I left the club together), they may be right. That is also an embarrassingly poor counter-argument. Any woman who makes it should be kicked out of Dartmouth.