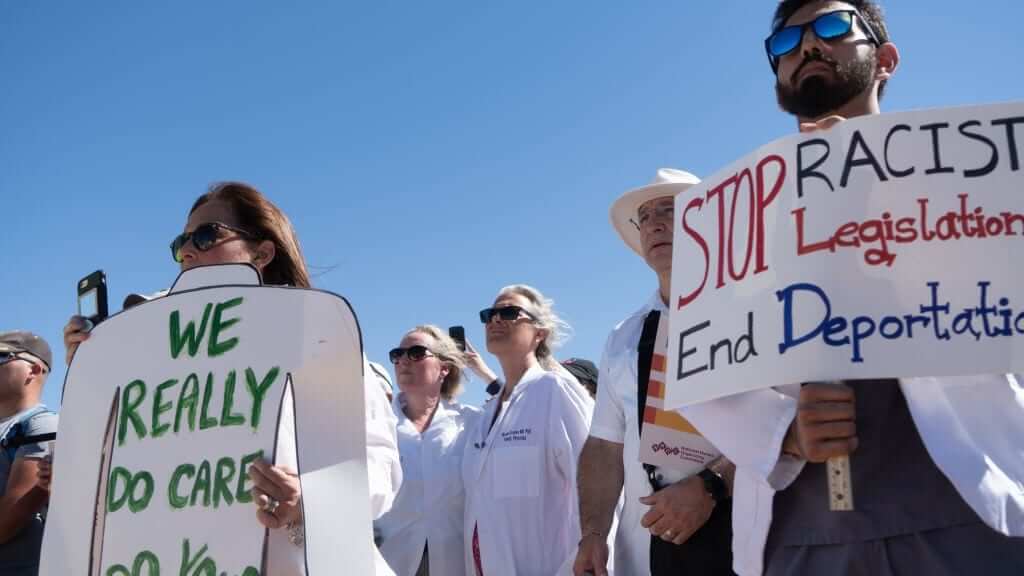 There are lots of short-term solutions to address the wave of immigrants who have swarmed the border in an effort to enter the United States illegally.

Why not use the thousands of currently half-empty residence halls at American colleges and universities to help house families from Central America and Mexico who await adjudication of their asylum claims?

Such multifaceted help from institutes of higher education would be particularly apt—and far better than using military bases. The vast housing, recreational and meal-service infrastructures of colleges are often underutilized in summer. Campuses are also bastions of liberal activism, proud both of their diversity and their expertise in dealing with sensitive matters of acculturation.

What better first glimpse of America could be offered to immigrants than the energy, pastoral beauty and hospitality of a quiet college quad or well-maintained residence hall?

It also makes no sense for college students to venture far and wide for internships when they could be enlisted on campus over the summer to tutor children from Central America and to monitor their safety and treatment.

If progressives believe that sovereignty and border enforcement are passe notions, then they should at least match their rhetoric with concrete solutions. In California, there are ongoing existential crises with homelessness, unaffordable housing, and dismal public schools that rate near the bottom of national surveys.

How could California square its present circle of being both the most impoverished and affluent of states—the most callous in fact, the most caring in theory?

Why not cease the current stampede to private academies that has left the public schools of the greater coastal corridor non-diverse and near-apartheid?

The huge Los Angeles Unified School District is now more than 70 percent Latino, as whites and Asians have fled the arrival of immigrant children. It’s much the same in Silicon Valley, where private prep schools are expanding enrollments to meet the demand from the affluent members of the tech industry.

The huge, multibillion-dollar market capitalizations of West Coast giants such as Amazon, Apple, Google, Facebook, and Yahoo have so far not led to more affordable housing, more diverse top-flight public K-12 schools, or a growing middle class energized by new arrivals from Mexico and Central America.

Instead, despite the rhetoric of inclusion, and televised and tweeted fury at U.S. Immigration and Customs Enforcement, the progressive left coast is among the most exclusionary of all American communities.

Zoning and environmental laws drive immigrants into enclaves and ghettoes. Gentrification ends up in the eviction of the first-generation immigrant poor from already overpriced rental units.

It is almost as if the louder one rails about unfair border enforcement, the more likely one is to avoid encounters with illegal immigrants. Outrage has become a safe way for elites to signal their virtue, acting out in theory what they are uncomfortable doing in fact.

One of the strangest scenes in impoverished rural Fresno County, where I live, is the epidemic of substandard housing. Almost every small old farmhouse now has trailers and shacks tacked on to them—all substandard and not meeting codes—to accommodate recent waves of new immigrants from Mexico and Central America.

Yet the media often showcase the huge gated homes and enclaves of Silicon Valley, Hollywood, and the journalistic elite. Surely some of all that unused square footage and those guest houses could be used to offer at least temporary hospitality to those in need.

Actor Peter Fonda could do far better to help immigrants than by tweeting threats to 12-year-old Barron Trump from his most non-diverse ranch in Paradise Valley, Montana. Instead, Fonda might advocate that Hollywood actors live among newly arrived immigrants, associate with them as equals rather than as the help, and promote public schools by ensuring that their own children and grandchildren attend them.

Better yet, why doesn’t Fonda invite a few of the immigrant families awaiting word on their legal status to the open spaces of his Montana ranch? Media accounts of his expansive and tasteful digs show an infrastructure that easily could accommodate a few needy immigrant families.

It is easy to invoke the Nazis and the Holocaust to express anger at the temporary detention of children and their families who have entered the U.S. illegally. It would be far more meaningful if marquee journalists, actors, academics, and activists knew immigrants not just as a distant abstract cause, or as nannies and landscapers, but as their neighbors, their children’s school friends—and as their social equals.