Missouri’s new attorney general is threatening to prosecute officials from the Columbia School District (CPS) after middle schoolers were subjected to a drag show without their parent’s knowledge.

According to Attorney General Andrew Bailey, drag show performances are “inherently sexual” in nature, therefore, the superintendent of Columbia Public Schools and the mayor of the city have likely run afoul of state statutes.  He called for school officials who knew in advance that the event would include drag performers to resign or step down, and warned that they could face further consequences.

“All options are on the table,”  Bailey, a Republican, said in an interview with Columbia talk radio station KSSZ.

I am calling for the resignation and/or termination of any school official who knew that they would be subjecting children to this adult-themed drag show without parental consent. https://t.co/ax9HOnkrcL

The City of Columbia, MO, held its annual “Columbia Values Diversity Breakfast” on Thursday, Jan. 19, 2023, after announcing on the city’s website that the event would feature keynote speaker Renee Montgomery, a former professional basketball player, sports broadcaster and Black Lives Matter activist, as well as entertainment by Nclusion+, a “social club & lifestyle production company” that “promotes LGBTQIA+ events media, and education within our community.”

A video posted on the group’s website indicates that the company focuses heavily on transvestites and drag performances.

According to Libs of TikTok, middle school students from at least three schools were invited to attend the event, and their parents were never informed that the event would include female impersonators. A permission slip sent to Smithton Middle School parents reportedly failed to mention Nclusion+ and the drag show. 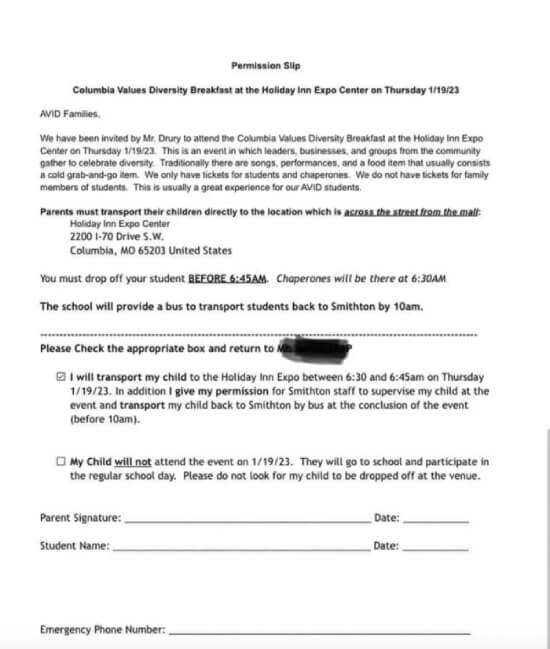 On Friday, Libs of TikTok posted a video of the performances on Twitter:

Video of a drag show yesterday in Columbia, Missouri. Columbia Public Schools took students there without informing parents that their child would be attending a drag show.

Members of the Columbia Public School Board and administration attended the event, including Superintendent Brian Yearwood.  Some members of the audience were seen holding up dollar bills to tip the transvestites as the performed in skimpy outfits in front of the audience.

In a multi-tweet thread, Columbia Mayor Barbara Buffaloe thanked the city’s planning committee for organizing the “diversity celebration,” and praised Drag as “a cross-cultural art form with a long & rich history that is fun and encourages self expression.”

We want to thank the planning committee of Thursday’s Columbia Values Diversity celebration. We appreciate the thoughtfulness that was put into organizing an event that recognizes and elevates the diversity of our community. 🧵 1/7 pic.twitter.com/8ZRLzwVF7V

“As hate crimes against drag show locations and performers are being committed in other communities, we want to reaffirm that Columbia is a community that supports all,” Buffaloe wrote.

Drag is a cross-cultural art form with a long & rich history that is fun and encourages self expression. As hate crimes against drag show locations and performers are being committed in other communities, we want to reaffirm that Columbia is a community that supports all. 🧵 5/7

Missouri Governor Mike Parson tweeted Friday night he was “deeply concerned” about the situation,  adding that “adult performances are not diversity.”

Parents weren't clearly informed of the contents of the program, and adult performances are not diversity. Columbia Public Schools should focus on educational experiences that prioritize math, reading, writing, science, and history, which parents expect and demand for their kids.

Columbia Public Schools Board President, David Seamon dismissed the concerns of outraged parents, stating: “other than the keynote speaker most of the program is unknown to the public.”

Libs of TikTok reported that she received a similar response from the school district. However, the city knew that Nclusion+ would be performing, as the group’s inclusion in the event was noted on the the city’s website.

Moreover, according to KSSZ talk show host Branden Rathert, a CPS spokesman was in on the planning for the event, so the district absolutely did know who would be performing. Rathert called on CPS Superintendent Dr. Brian Yearwood to resign. “He should resign over his lack of communication with parents,” Rathert said.

Bailey said even if the superintendent didn’t know, he should have known, and it would be considered “willful negligence” if he did not.

The radio host accused the school district of gaslighting parents, arguing that by claiming that their event simply celebrated diversity, the school was blaming parents for not appreciating its enlightened entertainment.

Columbia area parents don’t seem to be buying it, however. “I am appalled with Columbia Public Schools thinking it’s appropriate for children to attend a drag show,” said one parent who spoke with Libs of TikTok. “I am even more disturbed that our Superintendent, Assistant Superintendent of Secondary, school administrators and school board members were present and let it happen. Especially when, parents were not told their kids were going to a drag show.”

Columbia Public Schools spokesperson Michelle Baumstark said in a statement to KRCGTV that there were 30 CPS students at the event out of “more than 1,000-plus” attendees. Baumstark claimed that the district has received only two complaints from parents of children who actually attended the event.

However, Rathert told AG Bailey that parents no longer bother complaining to the school district because “they get treated like crap.”

The attorney general blasted the CPS officials, and said they need to be held accountable.

“Don’t let them hide behind the shroud, the cloak, the deception of ‘diversity’—because this issue is about protecting children,” he said.  “And if school officials, who are entrusted with the care, custody, and control of those kids, aren’t concerned about what’s in the best interest of the child, protecting the child, and giving the parents a voice, then we will step up and do it for them.”

Bailey on Friday fired off letters to Superintendent of Columbia Public Schools, Brian Yearwood, and to the Mayor of the City of Columbia, Barbara Buffaloe, warning them that “transporting students to a drag show likely runs afoul” of state statutes.

The letter asserted that “the Missouri General Assembly recently passed a new statute to protect school-aged children. This statute criminalized providing certain sexual material to a student and became effective in August. But the protections our state provides to Missouri’s children go further. Section 170.015 RSMo, also sets forth compliance with Missouri’s sex education law which specifically details what public schools are and are not allowed to present to minors on the topic of sex. Transporting students to a drag show likely runs afoul of this statute.”

Missouri law also requires that public officials report instances of child endangerment. “Not only did you fail to report this incident but it appears city and school officials actively participated in taking underage children to witness an inappropriate sexual performance in the form of a drag show. This kind of performance has no place in the public educational system,” the letter states.

I am committed to ensuring that schools are educating, not indoctrinating children, and that parents have a say. Children have a constitutional right to a quality public education because the next generation is essential to the preservation of the rights and liberties we cherish

The Missouri General Assembly recently passed a new statute to protect school-aged children. This statute criminalized providing certain sexual material to a student and became effective in August. But the protections our state provides to Missouri’s children go further. (4/7)

Further, law requires that public officials such as those working in our schools report instances of child endangerment. It appears public officials actively participated in taking underage children to witness an inappropriate sexual performance in the form of a drag show. (6/7)

Bailey told Rathert that the new statute that criminalizes certain sexual materials to children appears to have been “subverted and undermined in this instance.”

Brandon Banks, the co-founder of Nclusion+,  told KRCGTV the show was “G-rated,” and that the transvestites were modestly dressed. Banks said there was no removal of clothing, and their selection of songs were “uplifting and motivational.”

“I would say that if parents are giving their children access to any technology, any form of open internet access then they should really be super concerned about all of the influences that are out there for a child to consume, not just this,” Banks said.

“Because if you were there at that performance and if you watched any of the clips you can tell that anything that happened was very mild, modest, and completely appropriate,” he said.

In his interview with Rathert, the Missouri AG appeared to strongly disagree with that assessment.

“The drag show is an outward expression of desired sexuality. It’s an exaggerated emphasis on particular sexual characteristics that appeal to prurient interests, and the purpose of the people engaging in the activity is to draw attention to sexuality,” he said. “It is inherently sexual. How dare they sexualize our children in violation of state law, and in violation of the parents’ trust.”

When asked what kind of penalties the district should face for these violations, Bailey replied “I think all options have to be on the table. I am calling for the resignation or termination of any school official that knew that the drag show was going to be a part of the event and willfully took children to the event.”

Bailey also encouraged parents to attend CPS Board meetings that take place on the second Monday of each month.

“Parents need to empower themselves and go to that school board meeting and register their dismay, their complaints, their disgust with this kind of shameful behavior,” he said.

“I want all superintendents and all school boards across the state to publicly pledge themselves to protect our children and not expose them to these inherently sexual performances in the future. I want it on the record.” the AG added.

Bailey had a similar message in an interview with Kansas City news radio station KCMO. “All legal options are on the table,” he said.

“All legal options are on the table… those school officials who knew, or had a duty to know… need to resign or be terminated immediately.” – @AGAndrewBailey to @PeteMundo #moleg