Robert F. Kennedy, Jr. announced Tuesday night that he and several other plaintiffs had filed a groundbreaking lawsuit against several major news organizations, accusing them of antitrust and constitutional violations.

During a live interview with Fox News’ Tucker Carlson, Kennedy, chairman and chief litigation counsel for Children’s Health Defense (CHD), said the lawsuit targets the Trusted News Initiative (TNI), a self-described “industry partnership” launched by several of the world’s largest news outlets—including the BBC, The Associated Press (AP), Reuters, The Washington Post, Google Microsoft, Facebook, and Twitter—in March of 2020.  The lawsuit argues that the TNI was launched, in part, because the corporate media organizations believed that smaller independent news outlets were threatening their business models.

The complaint was filed in the U.S. District Court for the Northern District of Texas-Amarillo Division on Tuesday, and alleges that the offending news outlets partnered with several Big Tech firms to “collectively censor online news,” including stories about COVID-19 and, the 2020 U.S. presidential election that were not aligned with official narratives, according to the Defender.

On Tucker Carlson Tonight, Kennedy stressed that a TNI “misinformation” label does not necessarily mean that an outlet is reporting false information.

He told Carlson that the TNI had two purposes. “One was to suppress and censor any information—whether true or not—that departed from official government orthodoxies and government proclamations,” he explained, adding:  “I think probably the more motivating purpose of the cartel was revealed in one of the memos we have obtained from the BBC—which is to destroy their rivals in the independent media.”

Kennedy said that the BBC, a British government-owned news network, “orchestrated the secret anti-competitive collaboration” with the other news outlets.

He told Carlson the BBC essentially told the other groups “although we are ostensibly all rivals and competitors with each other, the existential threat to all of our business models comes from thousands of independent news sites who are now not only providing all this content that people are reading, but they are now diminishing trust in our organizations.”

As evidence of this allegation, the lawsuit includes the March 2022 statement by Jamie Angus, then-senior news controller for BBC News: 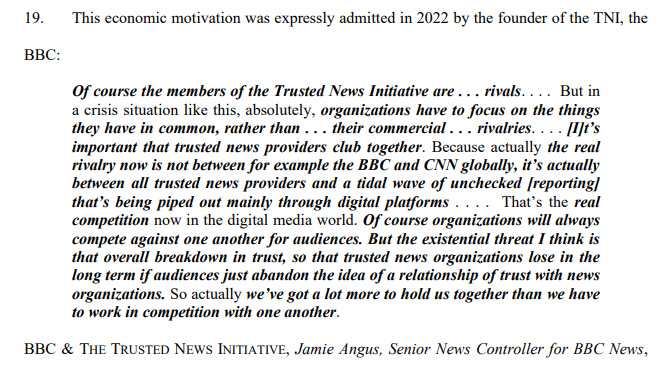 The BBC, Kennedy said, also told its TNI partners that they could “stamp them out and choke” the independent sites by denying them platforms on the social media sites.

“The viral movement of news stories is critical for the business models of those smaller news providers,” Kennedy explained.

“What they said is, anybody who departs from the trusted news, which is the official government narratives of WHO, CDC, the White House, Anthony Fauci, and NIH, we will make sure to identify them, and to make sure they are not given a platform.”

He added; “This has nothing to do with whether the statements were inaccurate. They use the word misinformation—and they acknowledge this throughout—as a euphemism for any statement that departs from official government orthodoxy.”

That’s the point right there, Carlson commented. “They were censoring things that were true, and that’s when you cross into criminal propaganda in my opinion.”

Robert Kennedy Jr. joins @TuckerCarlson to discuss a lawsuit against legacy media for censoring COVID-related content.@RobertKennedyJr: "We know from the #TwitterFiles and other information that's being released that the White House and other government agencies were colluding pic.twitter.com/hPlsWwOA7h

According to the complaint, “TNI members have deemed the following to be ‘misinformation’ that could not be published on the world’s dominant Internet platforms: (A) reporting that COVID may have originated in a laboratory in Wuhan, China; (B) reporting that the COVID vaccines do not prevent infection; (C) reporting that vaccinated persons can transmit COVID to others; and (D) reporting that compromising emails and videos were found on a laptop belonging to Hunter Biden.”

“All of the above was and is either true or, at a minimum, well within the ambit of legitimate reporting,” the lawsuit points out.

Below is a comprehensive list of “claims deemed ‘misinformation’ by one or more TNI members,” according to the litigation:

All of the plaintiffs allege they were censored, banned, de-platformed, shadow banned or otherwise penalized by the Big Tech firms partnering with the TNI, because the views and content they published were deemed “misinformation” or “disinformation.” This resulted in a major loss of visibility and revenue for the plaintiffs.

The lawsuit further alleges that Big Tech firms, having partnered with the TNI, based their decisions on determinations jointly made by TNI, which touted its “early warning system” by which each partner organization is “warned” about an individual or outlet that is disseminating purported “misinformation.”

The TNI’s legacy media and Big Tech firms then acted in concert — described in legal terms as a “group boycott” — to remove such voices and perspectives from their platforms. This forms the basis of the lawsuit’s antitrust and First Amendment claims.

“The TNI exists to, in its own words, ‘choke off’ and ‘stamp out’ online news reporting that the TNI or any of its members peremptorily deems ‘misinformation.’

“By their own admission, members of the [TNI] have agreed to work together, and have in fact worked together, to exclude from the world’s dominant Internet platforms rival news publishers who engage in reporting that challenges and competes with TNI members’ reporting on certain issues relating to COVID-19 and U.S. politics.

“While the ‘Trusted News Initiative’ publicly purports to be a self-appointed ‘truth police’ extirpating online ‘misinformation,’ in fact it has suppressed wholly accurate and legitimate reporting in furtherance of the economic self-interest of its members.”

According to the lawsuit, “this is an antitrust action,” and specifically, “Federal antitrust law has its own name for this kind of ‘industry partnership’: it’s called a ‘group boycott’ and is a per se violation of the Sherman Act.”

Legal precedent holds that a “group boycott” is “a concerted attempt by a group of competitors” to “disadvantage [other] competitors” by “cut[ting] off access” to a “facility or market necessary to enable the boycotted firm[s] to compete.”

A Washington Post article published on February 24, 2022 seems to buttress the lawsuit’s allegation that the TNI news sites considered smaller news organizations to be an “existential threat.” The report lamented that prominent vaccine skeptics were “outperforming news outlets on Facebook and Twitter.”

Two prominent sources of anti-vaccine information drew massive engagement and grew their audiences on Facebook and Twitter last year, in many cases outpacing a slew of news organizations, according to a new study shared exclusively with The Technology 202.

The report, produced by the German Marshall Fund (GMF) think tank, zeroes in on the reach of the popular conservative media site the Daily Wire, founded by Ben Shapiro, and of the Children’s Health Defense, a group founded by longtime anti-vaccine activist Robert F. Kennedy Jr.

It found that Kennedy and his group, which news rating service NewsGuard reports “has published false and unproven scientific and health information,” have more than doubled their Twitter followings since January 2021. And researchers said the Daily Wire has been the most popular news publisher on Facebook since July 2021, with much of its engagement “centered around content critical of vaccines and vaccine policy.”

Researchers say the findings highlight that sites known to spread misleading or false medical information at times dramatically outperform reliable sources on social media, and that anti-vaccine content can be a driver for that engagement.

“They couch what they’re doing, their conspiracy to suppress independent media, i.e. the voices of dissent about election information and COVID information, as a ‘need to preserve the trust of the people’ and ‘upgrade the trust,’” she explained.

“By censoring independent voices, what they’re doing is economic suppression. Antitrust is against trusts, it’s against monopolies, and what the TNI has done is essentially create a global media monopoly in the English language.”