About now, Sam Bankman-Fried has a bowl of Count Chocula balanced on his ample gut as he shouts into his “Call of Duty” headset at other gamers from the couch in his parents’ Palo Alto living room. On paper, he’s confined to the house he’s believed to have purchased for his parents using money intended for client accounts. The few hours he spent in federal detention before he breezily walked out says so much about what’s really going on. Bankman-Fried doesn’t need to know anything about crypto currency or math or even how to put on pants. That’s because he understands how power really works in America. Politics merge at the oligarchy. Bankman-Fried gave money to the right people from both parties.

How did a man claiming to have only $100,000 to his name manage to meet a $250 million bond? Well, his parents put up their house, likely worth a tiny fraction of the bond. As for the rest, Bankman-Fried just signed a piece of paper promising to pay it back if he doesn’t show up to court. Yes, the Justice Department just approved the release of the alleged perpetrator of what appears to be the world’s biggest financial fraud on a naked promise that he would pay them back if he skipped town.

Bankman-Fried, like Hunter Biden before him, exposes the bankruptcy of our supposedly democratic system. Bankman-Fried got the sweetheart bond deal because the Justice Department doesn’t punish its coconspirators. He was the second largest donor in the 2022 midterm election and an essential player in the joint government-oligarchy project to guide elections to enhance mutual power. 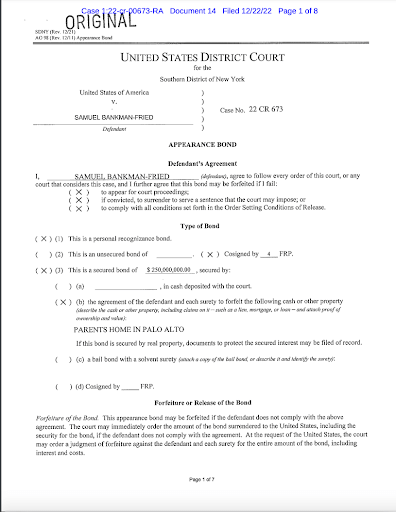 In the same week Bankman-Fried walked out of jail, the FBI issued a chilling response to the bombshell revelations about its sprawling censorship regime. We now know the FBI meddled in elections by paying millions to Twitter and likely other social media companies to censor disfavored political speech that threatened to derail favored candidates.

“The correspondence between the FBI and Twitter show nothing more than examples of our traditional, longstanding and ongoing federal government and private sector engagements, which involve numerous companies over multiple sectors and industries,” the bureau said in a statement. “It is unfortunate that conspiracy theorists and others are feeding the American public misinformation with the sole purpose of attempting to discredit the agency.”

In other words, the FBI admits to guiding social media censorship and acknowledges that it is both widespread and routine. But censorship isn’t the problem, from the FBI’s point of view. Complaining about the FBI is the problem. Noticing their misconduct and objecting to it is to blame for the damage to its reputation. And those who continue criticizing the bureau might find themselves on the “misinformation” list that silences American dissidents.

Republicans, no longer pretending to be the opposition party, just helped get the FBI a $600 million budget increase after the censorship bombshells conclusively demonstrated extensive bureau meddling in election-related speech. Every member of Congress now serving has won at least one election in the present era of FBI election manipulation. Some are probably beneficiaries. Should we be surprised that there are so few voices calling for it to end?

But maybe if we vote harder! Maybe the economic conditions, the memory of the riots of 2020, and dissatisfaction with the regime’s pandemic policy will lead the American electorate to wake up and vote smarter? If the FBI could stop a Democratic rout in 2022, why should 2024 be any different? Candidate quality? Don’t insult our intelligence. So Republicans need to run more candidates like John Fetterman?

American elections increasingly stray from international election standards. Ballot harvesting impairs the sanctity of the secret ballot. Democrats and their wealthy donors essentially picked Republican primary winners by channeling funding into the distorted process. In a functioning democracy, the ruling party does not interfere with the internal candidate selection process of their opposition. Laws barring voter ID increase suspicions that some people might be voting more than once. A failure to finish the count on election day fuels suspicions about whether insiders are using delays to tamper with results.

But suspicions are one thing. We can say with certainty that our government interferes with election-related speech to the benefit of one party and to the detriment of the other. The FBI’s interference in election speech, in of itself, is sufficient to make the elections noncompliant with international election standards. That is the first and most important reform that must be made or our elections cannot be deemed fair.

So why participate in an election that’s being manipulated by the FBI and other government agencies? In sham democracies, when the government refuses to adhere to international standards of fairness and transparency, the opposition parties have simply boycotted the elections.

As I write this, opposition parties around the world have used election boycotts to embarrass repressive regimes that crave the legitimacy of an apparent election victory. For example, Nicaraguan exiles recently called for a boycott of their country’s upcoming election. As the New York Times recently wrote of the Nicaraguan election,

These days, governments like those in Nicaragua, Venezuela and elsewhere that reject political pluralism are ready to go to great lengths to pretend to embrace democracy—primarily by imitating the crucial rituals of periodic elections. When election time comes around, authoritarians allow a certain amount of political campaigning, vet candidates (barring or even arresting those deemed too critical of the government), then make a show of counting ballots, all the while intending to hold on to power.

Among the stated reasons for the boycott? As the Inter-American Commission on Human Rights put it, “[I]ndependent media are being shut down and their facilities are being raided, and major opposition leaders—including individuals who tried to stand for the presidency in elections held in 2021—are being arbitrarily arrested.”

But this isn’t Nicaragua, this is America! The Biden Administration would never dare raid opposition journalists or arrest a political opponent to keep him from running, would it?

Recall that in 2021, the FBI conducted coordinated raids against Project Veritas. This on top of the FBI’s role in undermining the independence of Twitter and perhaps other social media outlets which should act as a constitutional check on government power. Ever notice how the legacy media moves as a herd? If one starts using a word like, “collusion” or “insurrection,” they all do it. How often has an FBI staff member written those scripts?

And further recall the words of Joe Biden, who said recently, “We just have to demonstrate that he [Trump] will not take power if he does run, making sure he—under legitimate efforts of our Constitution—does not become the next president again.” As Julie Kelly points out, the special counsel now investigating Trump is just as much of a sham as the last one. The group is staffed by people who hate Trump and were already working on getting him when the supposedly “independent” special counsel was appointed.

The FBI censorship scandal is just the latest in a string of questionable actions by the Justice Department that have impacted our elections.

We can all recall that three months before the 2022 election, stories about  the FBI raiding Donald Trump’s Mar-a-Lago compound dovetailed with the January 6 committee’s effort to convince midterm voters that President Trump planned or directed the Capitol incursion. Just before the 2020 election, the FBI made news in the swing state of Michigan by claiming to have broken up a “plot” to kidnap Gretchen Whitmer, the Democratic governor. Revelations in the subsequent criminal cases exposed the caper as a false flag or entrapment operation, as it turned out that the FBI planned and financed the whole thing. The FBI exercised full control over the timing of the pre-election announcements.

It was, as Julie Kelly reported, “flagrant election interference.” One can remember Robert Mueller’s ridiculous probe, which used leaks to publicly harass the president through the 2018 midterms. In 2016, the FBI famously meddled by exonerating Hillary Clinton of a scandal involving the Clinton family foundation taking money from people seeking favors from the State Deparment when she was secretary of state. The FBI went on to launch a spying operation against candidate Trump’s campaign figures, including Carter Page, and shared classified details of that spying with candidate Clinton’s subcontractor Christopher Steele. (Yes, that happened. See pages 114-115 of the inspector general’s report.) The FBI’s election interference has had real historic consequences. Obamacare would not have been possible, for example, if the FBI had not unseated Senator Ted Stevens (R-Alaska) by framing him for taking a bribe.

Somebody should ask Joe Biden whether he’s willing to sign an executive order banning government involvement in moderation of election-related speech. The next time a hostile reporter tries to slam a dissident politician, maybe someone should retort with a question asking whether that reporter or her employer accepts money from the government. The practice of the FBI sharing information and coordinating with social media is totally destructive of its crucial independence from the government—especially when the FBI uses taxpayer money to pay for the requested censorship.

Election fraud suspicions have been incredibly difficult to confirm and pursuing wilder claims has come at the expense of scrutinizing the government’s own election misconduct that has happened in plain sight.

We can prove government-directed censorship of election-related speech. Now that the FBI said it plans to continue or even expand these efforts, we have a choice to make. Do we legitimize the sham by trying really really really hard to overcome the rigged political forum? Or do we just boycott these sham elections until the FBI stops directing our political process?