Nothing is special about Christmas at the White House this year. In fact, not all the Bidens are represented in their Christmas decorations as the family continually ignores one of their grandchildren—Navy Jones Roberts. There is more of a representation to dogs and cats than bloodline this year. This is not a family who cares about family. Even mafias treat their own better.

When Jill Biden gave her overview of the White House Christmas decor, there was nothing special about it. It was all secular praise. Except for the end of her speech when she (finally!) mentioned God’s blessings as if an afterthought, her speech only recognized the temporal. At least there are no decorations of Chinese communist despots, as there were during the Obama Administration. With Biden, we have to lower our expectations.

Biden’s Christmas message was full of . . . nothing. It was a word salad of pablum: “And we look to the sky, to a lone star, shining brighter than all the rest, guiding us to the birth of a child—a child Christians believe to be the son of God; miraculously now, here among us on Earth, bringing hope, love and peace and joy to the world . . . Yes, even after 2,000 years, Christmas still has the power to lift us up, to bring us together, to change lives, to change the world.”

The phrase “Christians believe” is rather noncommittal. All faiths can believe in Christmas and its message, he implores. Oh? Perhaps he does not understand that not all believe in the divinity of Christ and the fulfilled prophecy of His birth that spilled onto mankind our ultimate Salvation. For Biden, Christmas means “A simple smile. A hug. An unexpected phone call. A quiet cup of coffee. Simple acts of kindness that can lift a spirit, provide [compo- — SIC] comfort, and perhaps maybe even save a life.”

And, while the White House occupant feigned a lament that we are so divided and insisted we instead should see each other as Americans no matter what we believe, his administration jails political prisoners keeping them in inhumane conditions. We might as well be blunt: Biden does not believe one word of his Christmas message. His actions contradict his lofty prose.

So why spend time in the clown world of Biden Christmas? Let’s change it up and take a trip back to Christmas past. It should shock no one that there is little understanding of Christmas, even its secular mythology, among the ruling class. They eschew both the traditional secular and the traditional religious significance of the season.

It is not remembered by our boomer-minded generations that at one time the two most celebrated holidays in the country were Independence Day and Thanksgiving. The pictorial papers of the day—Frank Leslie’s Illustrated and Harper’s—devoted much print to the festivities. It took time for Christmas as we recognize it to catch on, beginning in the 20th century.

Because Christmas was controversial in the colonies and in the early history of the United States, it remained more or less a private and religious affair. The Puritans despised it as frivolous decadence and contended it was not a special day to be celebrated. People should work; kids should go to school. It was not supposed to be a day off. Religious hostility also drove their desire to not recognize Easter celebrations. Still, Christmas had always been, for traditional Christians generally, a celebration and reflection on the Birth of Christ.

Immigration in the mid to late 19th century drove the growing acceptance of the holiday, especially from the Germans. Before that time, the Puritan/Protestant bias remained strong. There was a sense that the old world traditional faiths were so corrupt that Christmas did not become a federal holiday until 1870.

Ulysses Grant was the president who declared Christmas a holiday in a bill that also declared federal holidays for Thanksgiving, Independence Day, Good Friday, and New Year’s Day. This bundling of holidays puts things in perspective. The bill was signed on June 24, 1870. It received little fanfare or recognition in the press.

We were five years past the unpleasant war. Grant and the Republican Congress undoubtedly wanted something that would bind the country’s wounds and allay some of the bitterness that remained. The holidays taken as a whole were meant to reconstitute the focus of the country onto things all could commonly celebrate. It was a holiday that could unite everyone, given the immense sacrifice the entire country felt in the aftermath.

In the years leading up to 1870, nearly every newspaper noted the religious significance of the day. Poems of bells ringing in the “Savior’s birth” were at the forefront. It was not until near the Civil War in Leslie’s and Harper’s that we find advertisements for “holiday presents.” Ads for Christmas decorations were nonexistent, but would find their way into newspapers before the end of the 1860s. It took time for a “market” surrounding Christmas decorations to catch on.

It was Harper’s more than any other entity that promoted the visual representation of Santa Claus. No one more than the German cartoonist Thomas Nast popularized him in visual form to the American public. Santa was portrayed as a jolly fat man smoking his pipe and bringing gifts to the children. He was more mischievous in these representations. 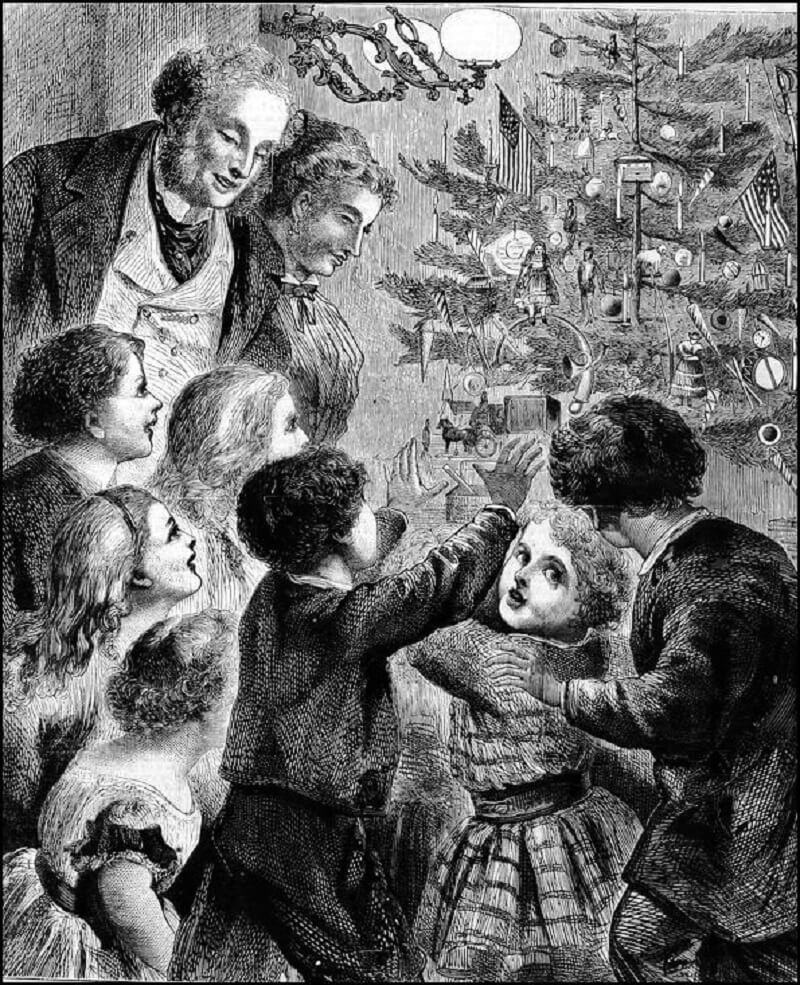 In 1870, Harper’s made full display of not only secular Christmas, with Santa Claus bringing gifts, but also balanced it all with illustrations of the Nativity. There was, therefore, a recognition of the increasing German cultural representation of the holiday. What is remarkable about the “Christmas Time” drawing is the addition of the flag in its branches. Christmas had both religious and patriotic significance. If Grant had any intention of citizens being reconciled to their country, he was apparently successful. How many of us place the American Flag in our trees today?

For the Orthodox and Catholics, Christmas is deeply personal and religious. There is none of the childhood lore in services; the Gospel dominates. Advent and the birth of our Lord is the beginning of the liturgical year.

The poem we know today as “’Twas the Night Before Christmas” was actually titled “A Visit from St. Nicholas.” It was written by Clement Clarke Moore in 1823. In 1855, one of Moore’s daughters painted illustrations to go along with it.

The book is loosely based on a real saint of the Church—Saint Nicholas. He is accepted as a saint by both the East and the West, so his presence in Christianity represents a rare example of unity. He defended the faith against Arianism, which claimed that Christ was not co-eternal with the Father. Arius’ heresy was the topic of the First Ecumenical Council. Nicholas died around 325 A.D.

Nicholas lived during the time of Diocletian (imprisoned by him, freed by Constantine) and was allegedly present at the early ecumenical councils at Nicea. But, he was legendary for his care for the poor and especially for his habit of bringing gifts to children. His feast day was celebrated in the time of Justinian, and he gained fame in the Germanic and Dutch communities where he was slowly disconnected from his Christian significance and instead took on the form of “Sinterklaas.”

The bifurcation of the secular and the religious was usually noted in Harper’s, which frequently published an illustration of Christmas past (the birth of Christ) and Christmas now (the giving and receiving of gifts).

In fact, by the 1920s, only one in five households had a Christmas tree. It is alarming, perhaps, that in Frank Leslie’s December 25, 1913 issue, Secretary of the Navy Joseph Daniels published a “plea for Old Time Christmas” because he thought that even by then, the religious significance of the season was being forgotten, replaced by the secular mythology of Santa Claus. It was not until Mad Men got ahold of the image in the 1930s that we saw Santa used as marketing for Coca-Cola.

For most of us, Christmas is an odd secular and religious mash-up. America’s changing demographic brought this about in the 19th century—the more Old World immigrants we accepted, the more tradition progressed in the direction of Santa and materialism. Was it for the better?

Now even the wholesome Santa Claus mythology is passing from us. We ran the Church out of public discourse long ago. Today we are bumping up against uncharted territory where “science” is our god, man is poised to be remade into man 2.0, and the Bidens are fully on board with this program. But as a wise man once noted, “Science without morals degenerates into cynicism, and thus destroys the basis of the scientific effort itself; and morals without science degenerates into superstition and thus is apt to become fanatic cruelty.” This is where “progress” has led us.

Lost in all of this are the souls of human beings created in His image. How the Laws of Nature and Nature’s God reap that consequence should make us wonder about the awesome power of the Lord.