Former President Donald Trump appears to have annoyed supporters and critics equally Thursday with his rollout of a new line of digital trading cards after promising a “major announcement” the day before.

On Wednesday, Trump teased on Truth Social that he would be making a “major announcement,” writing in all caps, “AMERICA NEEDS A SUPERHERO!”
There was speculation online that the announcement would be related to the House Speaker race, Trump getting back on Twitter, or a VP pick for his 2024 presidential campaign.

Instead, Trump announced on Truth Social that he was launching of line of Trump super hero digital trading cards “featuring amazing ART of my life and career.” The cards, he said, are “very much like a baseball card, but hopefully much more exciting.”

The cards can be purchased with cryptocurrency or a credit card at collecttrumpcards.com. The website notes the cards are not political and the profits will not go toward Trump’s 2024 presidential campaign. 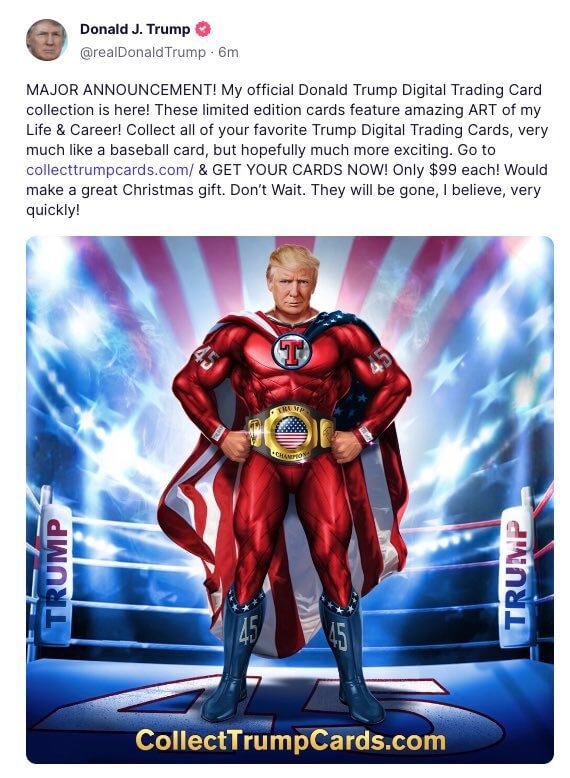 The announcement drew mockery on social media from both Democrats and Republicans, including some of his biggest allies.

“I love Trump, but I want to know WHO in Trump’s orbit thought it was a great idea to sell egotistical trading cards?” tweeted “Proud Army Brat,” adding: ” Our beloved country is sliding into a deep, dark hole on the daily—THIS is more pressing.”

I love Trump, but I want to know WHO in Trumps orbit thought it was a great idea to sell egotistical trading cards?
Our beloved country is sliding into a deep, dark hole, on the daily – THIS is more pressing. pic.twitter.com/mexHtVCcB6

“Please tell me this is [a] troll and the real major announcement will come later today,” said Twitter favorite Catturd.

“I supported Trump for years but this is ridiculous,” tweeted former New York cop John Cardillo.  “Pushing a worthless NFT for $99 a week before Christmas on the heels of the #FTX collapse is beyond wrong.,” he added.  “Calling it a “MAJOR ANNOUNCEMENT” is just weird. Who advised him to do this?”

Breitbart’s John Nolte tweeted: “So while DeSantis is investigating the vaccine, Trump is selling $99 trading cards … of … himself.”

Joe Biden’s personal Twitter account even joined the fray, with a staffer writing “I had some MAJOR ANNOUNCEMENTS the last couple of weeks too,” and taking credit for inflation easing, lower gas prices, and “10,000 new high-paying jobs in Arizona.” He also touted the attack on religious liberty known as the Respect for Marriage Act as something to be proud of, as well as his administration’s decision to swap an international Russian arms dealer with an anti-American women’s basketball player.

I had some MAJOR ANNOUNCEMENTS the last couple of weeks, too…

“Oh sit your ass down,” tweeted conservative activist Lavern Spicer in response. “No one wants to hear it. And the NFT announcement was dumb as hell. We can agree with that and still think you suck.”

Producer/director Robby Starbuck said he found the rollout of Trump cards during the “dark” days of the Biden regime to be a turn off.

“Hard truth time: This is not good,” he wrote. “We’re facing a threat to civilization from far left Marxist extremists. Teasing NFT cards as a major announcement is not the kind of fight people want to see now. These are dark times. Love the guy but this turns many off. Agree or disagree?”

In a Twitter poll, a resounding 82.7 percent of his mostly conservative followers indicated that they were “turned off” by the announcement. 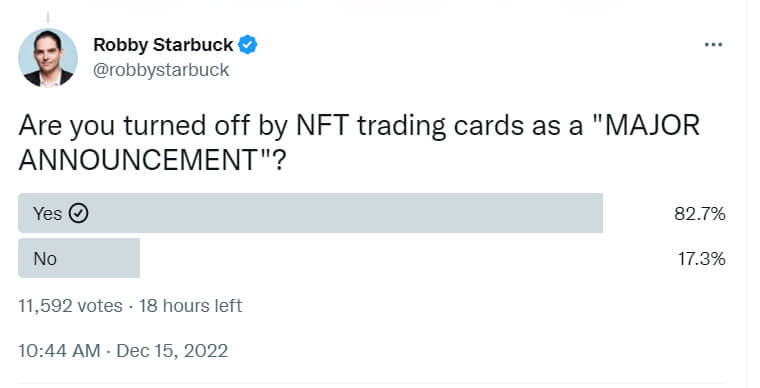 “Whoever’s advising this stuff is a good idea needs to be fired,” Starbuck wrote in a subsequent tweet. “This is NOT 2016. We’re in an economic crisis, fighting total cultural degradation, fighting to save our country and facing an enemy that wants to control our lives. People want to see fight right now, not NFT cards.”

The announcement went over much better with conservatives.

EXCLUSIVE VIDEO: I have obtained a copy of President Trump unveiling the major planks of his official Free Speech Policy Proposal

This is the first video drop in a series to come from his 2024 presidential campaign pic.twitter.com/PDMUBNmc8W