Among the revelations in the latest document drop, is that former Twitter officials Jack Dorsey and Vijaya Gadde were in a secret top-level group that limited the visibility of content from high profile users. Accounts blacklisted by the group of moderators, included Libs of TikTok and Stanford School of Medicine Professor Dr. Jay Bhattacharya.

Twitter used a “visibility filter” (VF) to control the visibility of a user’s tweets, according to Weiss.

“It used VF to block searches of individual users; to limit the scope of a particular tweet’s discoverability; to block select users’ posts from ever appearing on the “trending” page; and from inclusion in hashtag searches,” she explained. “All without users’ knowledge.”

A  Twitter engineer told the reporters: “We control visibility quite a bit. And we control the amplification of your content quite a bit. And normal people do not know how much we do.” Two additional Twitter employees told them the same thing, Weiss said.

“Think about visibility filtering as being a way for us to suppress what people see to different levels. It’s a very powerful tool,” a top Twitter employee told the reporters.

A group called the “Strategic Response Team – Global Escalation Team, or SRT-GET” decided which users to throttle, and handled up to 200 “cases” a day,” Weiss reported.

This is significant because Dorsey and Gadde have both preciously claimed that Twitter does not shadow-ban based on political viewpoints. 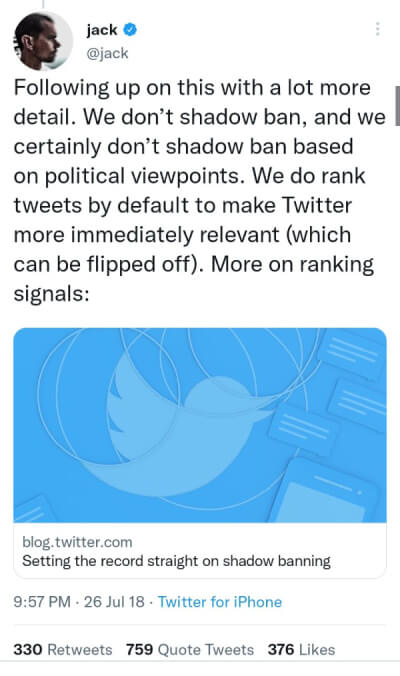 Dorsey and Gadde both denied on Joe Rogan’s podcast that Twitter engaged in shadow-banning of conservative viewpoints.

In testimony before the U.S. House Energy and Commerce Committee in September of 2018, Dorsey claimed that a ‘bug’ had caused an algorithm to target more than 600,000 mostly conservative accounts—including members of Congress— for ‘filtering’ from news feeds, trending, etc.

Twitter’s SIP-PES group is where “the biggest, most politically sensitive decisions” on shadow-banning users were made, Weiss wrote.  “Think high follower account, controversial,” a Twitter employee explained. For these cases, “there would be no ticket or anything,” the employee said.

“One of the accounts that rose to this level of scrutiny was @libsoftiktok,” Weiss noted.

The account, which has over 1.4 million followers, was on the “Trends Blacklist” and was designated as “Do Not Take Action on User Without Consulting With SIP-PES,” the reporter added.

16. One of the accounts that rose to this level of scrutiny was @libsoftiktok—an account that was on the “Trends Blacklist” and was designated as “Do Not Take Action on User Without Consulting With SIP-PES.” pic.twitter.com/Vjo6YxYbxT

Libs of TikTok was reportedly subjected to six suspensions in 2022 alone, and was blocked from posting each time for as long as a week.

But in an internal SIP-PES memo from October 2022, after her seventh suspension, the committee acknowledged that “LTT has not directly engaged in behavior violative of the Hateful Conduct policy.”

The committee justified her suspensions internally by claiming her posts encouraged online harassment of “hospitals and medical providers” by insinuating “that gender-affirming healthcare is equivalent to child abuse or grooming.”

Compare this to what happened when [Libs of TikTok] herself was doxxed on November 21, 2022. A photo of her home with her address was posted in a tweet that has garnered more than 10,000 likes.

When [Libs of TikTok] told Twitter that her address had been disseminated she says Twitter Support responded with this message: “We reviewed the reported content, and didn’t find it to be in violation of the Twitter rules.” No action was taken. The doxxing tweet is still up.

3. Take, for example, Stanford’s Dr. Jay Bhattacharya (@DrJBhattacharya) who argued that Covid lockdowns would harm children. Twitter secretly placed him on a “Trends Blacklist,” which prevented his tweets from trending. pic.twitter.com/qTW22Zh691

During his recent seven-hour deposition with Louisiana Attorney General Jeff Landry and Missouri Attorney General/U.S. Senator-Elect Eric Schmitt, NIAID Director Dr. Anthony Fauci denied that he had anything to do with Big Tech’s censorship of Bhattacharya.

“I have a very busy day job running a six billion dollar institute. I don’t have time to worry about things like the Great Barrington Declaration,” he reportedly said

The account of conservative commentator Dan Bongino was also apparently placed on a “Search Blacklist,” and Turning Point USA President Charlie Kirk had his account marked as “Do Not Amplify,” according to the Twitter Files.

Weiss also shared screenshots of internal messages from Yoel Roth, Twitter’s former head of safety and integrity, in which he asked for research on “non-removal policy interventions like disabling engagements and deamplification/visibility filtering.”

The first installment of the Twitter Files, released by Taibbi last Friday, revealed an internal debate at the company over how to handle the New York Post’s explosive Hunter Biden’s laptop story in October of 2020.

Weiss said more details about the Twitter Files will be posted at her website, The Free Press.

Bhattacharya, Bongino, Libs of TikTok and Kirk responded to the new revelations on Twitter:

I'm curious about what role the government played in Twitter's suppression of covid policy discussion. We will see with time, I suppose.

Thank you @bariweiss and @elonmusk. Sunshine is the best disinfectant.
2/2

Going to sleep tonight feeling entirely vindicated. It was infuriating getting suspension after suspension knowing I never violated any Twitter rules. This is the greatest gift. https://t.co/5mJPZ7fR7n

I'm happy Elon Musk and Bari Weiss have confirmed my account was targeted, but every Twitter user deserves to know if they too were targeted in some way. Twitter should publicly release ALL information on shadowbans, no matter how large or small the target was. Let the truth out.