After sparring online with high-profile conservatives, Wiener on Wednesday claimed a tweet posted by Turning Point USA founder Charlie Kirk had incited someone to send him a death threat.

“Not even 24 hours after MAGA grifter Charlie Kirk tweeted homophobic lies about me, I received this threat repeating one of his lies,” Weiner tweeted.

In a Twitter thread assailing Weiner on Tuesday, Kirk had written: “If elected Republicans care as much about their voters’ concerns as Scott Wiener cares about freeing pedophiles and mutilating children, they’d have won total victory long ago.”

Thousands of pedophiles in California are going free after just a few months in jail, thanks to the state's radically reduced penalties for child molestation.

One reason so many of these predators are going free so early is California lawmaker Scott Wiener.🧵 pic.twitter.com/Z2X8wBhRA0

Wiener also co-sponsored a bill in 2017 to remove the felony penalty for knowingly exposing another person to HIV. Another bill he pushed, SB 866, would have allowed 12 year-olds to get mRNA injections without parental knowledge. The bill was too much for even liberal California, and was pulled after it caused a public outcry, which Wiener and his allies in the media characterized as a “hate-filled pressure campaign.”

In a post headlined, “After A Death Threat, Senator Wiener Fires Back At Far-Right Attacks, SF Gate reported: “Weiner has described their comments as homophobic and a “stain on our country.”

Wiener said in a statement Wednesday: “LGBTQ leaders around the country are under attack by toxic, far-right ideologues and elected officials. These MAGA talking heads—whose party performed far worse than expected in the midterm elections—have no meaningful policy solutions for the issues facing our country. Instead, they are focused on slandering and demonizing gay and trans people and using us as scapegoats.”

To prove his point, he posted a threat that he claims was received less than 24 hours after Kirk had tweeted about his controversial positions. While he didn’t specify how the threat was sent, he implied it was through Twitter’s direct messaging, saying “Twitter is becoming a cesspool for this crap.” 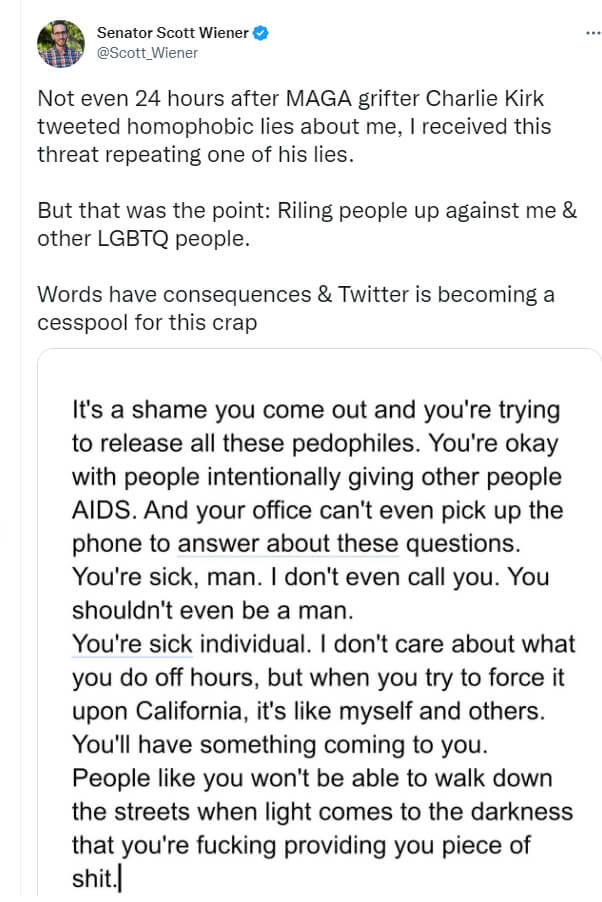 As conservative Twitter noticed, Weiner appeared to have left his computer’s underlined grammar suggestions, and cursor bar in place when he screenshot the message, strongly suggesting that he typed the message himself.

After Twitter users pointed this out, Weiner claimed it was a voicemail that had been transcribed, not an email.

“And for all the MAGA conspiracy theorists out there, the threat was a voicemail,” he tweeted. “This is a transcription. But have fun spinning around with your conspiracies.”

Twitter users found that suspicious too, since a voicemail transcript would not display a cursor and spell check marks. In other words, instead of having his iPhone transcribe the voicemail into a text format for him, Weiner appears to have typed it out manually.

“Oh so you got a voicemail death threat and instead of posting the audio you carefully transcribed it, posted the transcript, and never even mentioned that it was a voicemail until everyone doubted your original story? Sure that makes sense, Jussie. Totally believable,” tweeted the Daily Wire’s Matt Walsh.

Twitter users accused the lawmaker of attempting to claim victimhood status through an apparent fake hate crime, and dubbed him “Jussie Wiener.”

What an absolute turd. Everyone can clearly see the spellcheck dots and cursor. Ladies and gentlemen, I present to you Jussie Wiener. pic.twitter.com/YFJ1JztIbH

Can you please tell me where you received this message because to me it looks like an unfinished word doc?

Nice letter. Looks like you wrote it yourself, Jussie.

There were the sentence fragments, but you were so mad at the time you wrote it, that was to be expected.

Did you at least get the Subway Sandwich you were doing to get when they dumped bleach on you and told you it was MAGA Country, Senator Smollet?

Independent journalist Andy Ngo drew attention to another recent homophobic threat that turned out to be a hate crime hoax.

A gay liberal is revealed to be the suspect who allegedly made terroristic threats against a gay club in #Atlanta. The incident had been blamed on right-wing “stochastic terrorism,” much like the Colorado gay club shooting by a trans non-binary suspect. https://t.co/cpj7avEksg

An extensive database of hate crime hoaxes can be found at the website FakeHateCrimes.org.

Former diplomat and Trump official Ric Grenell urged Wiener to release an audio recording of the threat, saying, “Maybe someone will recognize the voice.” Grenell pointed out that “lot’s of people get death threats” and “it’s terrible” so he should “share the voice publicly.”

Release it. Maybe someone will recognize the voice.

American Greatness contacted Wiener’s Capitol office to find out if he has plans to release an audio recording of the alleged voicemail, and whether he has reported the threat to the police. We did not immediately receive a reply.