The election integrity unit of Arizona’s attorney general’s office has opened an inquiry into Maricopa County’s handling of the mid-term elections, demanding an explanation for the  widespread election equipment failures that plagued voting on Election Day, and warning that there is evidence of “statutory violations.”

Outgoing Republican attorney general, Mark Brnovich requested a full report due to a “plethora” of complaints from election workers, poll observers, and voters, as well as a “comprehensive log” of all changes made to printer settings prior to Election Day.

Thousands of voters were forced to wait in line for hours only to see their votes repeatedly rejected by the vote tabulators. Voters were forced to either deposit their ballots in boxes that were transferred to downtown Phoenix to be counted, or travel to another location to vote, only to see their ballots rejected again there. For the past week, Republican gubernatorial candidate Kari Lake’s campaign has been  collecting video testimonials of irregularities that can be used in court.

“Based on sworn complaints submitted by election workers employed by Maricopa County, the BOD printers were tested on Monday, November 7 without any apparent problems,” Wright noted. “Many of those election workers report that despite the successful testing the night before, the tabulators began experiencing problems reading ballots printed by the BOD printers within the first thirty minutes of voting on Tuesday, November 8, 2022.”

Kari Lake’s campaign suggested on Monday that the Election Day equipment failures could be the result of “deliberate sabotage.”

“They knew our voters would turn out on election day,” Kari Lake War Room tweeted. “How charitable of us to to give them the benefit of the doubt that this was incompetence, when it would be so much easier to say it was deliberate sabotage.”

In the letter, Wright said statements made by both Maricopa County Supervisor Bill Gates and Recorder Stephen Richer, “along with information Maricopa County released through official modes of communication appear to confirm potential statutory violations of title 16.”

Wright said poll workers have reported in sworn complaints “that they were not trained and/or not provided with information on how to execute ‘check out’ procedures” for e-Pollbooks once a voter gave up and left one malfunctioning polling place for another.

“Further, we have received a sworn complaint from an election observer indicating that more than 1700 “Door 3” non-tabulated ballots from one voting location were placed in black duffle bags that were intended to be used for tabulated ballots,” she added.

The AG’s office said it wants answers before Maricopa County submits its final its final canvas for certification, which is due by Nov. 28.

Several Arizona counties—Gila, Yavapai, and Cochise—have reportedly opted to delay certification of their election results due to the Election Day mishaps.

Democrat Secretary of State Katie Hobbs has been prematurely declared the winner of the governor’s race, but Republican Kari Lake has refused to concede, arguing that thousands of largely Republican voters were disenfranchised on Election Day when the malfunctioning tabulators rejected their ballots.

In response to the AG’s latter, Lake told The Daily Mail that she believes she will be Arizona’s next governor after the dust settles.

“The way they run elections in Maricopa County is worse than in banana republics around this world,” she said.

“And I’ll tell you what, I believe at the end of the day that this will be turned around and I don’t know what the solution will be but I still believe I will become governor, and we are going to restore honesty to our elections,” she said.

Gates has claimed that printers at 70 of the county’s 223 polling sites produced ballots with ink that was too light to be read by vote-counting machines on Election Day, but a “roving attorney” who observed the voting process claimed in a memo last week that significantly more than 70 voting centers were affected.

Mark Sonnenklar was one of eleven roving attorneys who was tasked by the Republican National Committee (RNC) with observing election processes in Maricopa County on November 8, the Daily Caller reported.

Sonnenklar said that collectively, they visited nearly 52 percent of the county’s voting centers, and that 72 of  the 115 visited centers saw “material problems with the tabulators not being able to tabulate ballots,” resulting in “substantial voter suppression.”

Though the memo does not address whether tabulation and printer problems may have occurred at the Maricopa County voting centers that the attorneys did not visit, a significant number of those locations may have seen similar issues, given the large sample size of voting centers visited by the roving attorneys.

Lake issued a statement Monday afternoon, praising AG Brnovich for taking “the first necessary steps of remedying this assault on our Democracy.”

“Attorneys are working diligently to gather information, whistleblowers ARE coming forward, and the curtain is being lifted,” Lake said. 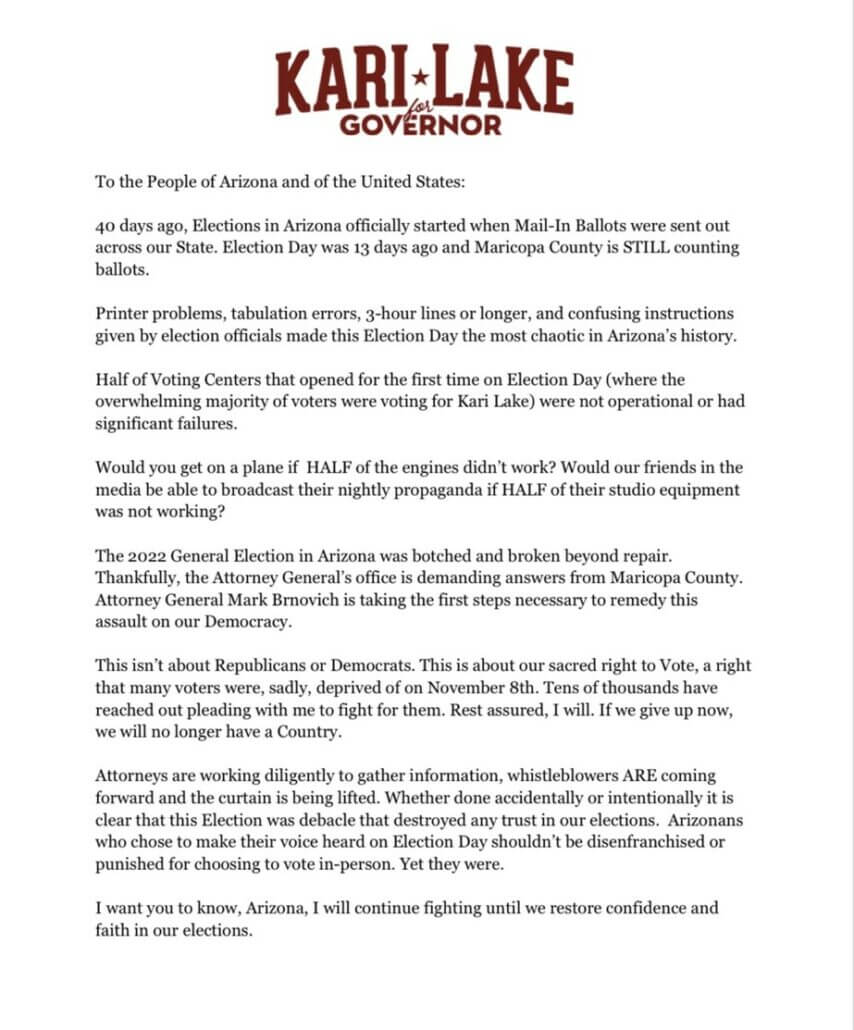