Shedding an ideology is never easy, especially for true believers. This is the unfortunate situation we find ourselves in with Janus-faced antiracism and its enforcement arm of “diversity, equity, and inclusion,” particularly on college campuses.

It’s a strange and dystopian doctrine, and if you have doubts about it, you’ll be glad to know that those doubts are well-founded. Here, you can take the first step along the road to DEI deprogramming and reacquire your critical faculties so necessary to surviving and thriving in a modern information-age society.

Here I refer to DEI as it is practiced and propagated in American universities.

“Doing the Work” as a Fellow Traveler?

You may have been exposed to DEI on your campus and, as a result, have become a quiescent “ally” or an active fellow traveler helping to perpetuate the scheme. Perhaps you fancy yourself “doing the work” of “antiracism,” particularly as your institution may have issued one of the garment-rending “racial justice” statements in the wake of the murder of George Floyd in Minneapolis in 2020, even as no university in the nation had anything to do with that event and, at least as traditionally understood, universities remain the least-racist places in the country. Many folks go all-in on the diversity, equity, and inclusion project, not recognizing that DEI has a deceptive frontstage offering and a noxious backstage ideological reality.

This frontstage/backstage tactic is a reliable tool for the social justice lobby, especially in universities, which have uncritically embraced DEI and have installed racialist bureaucrats—psychologist Irving Janis called them “mindguards”—to administer the political orthodoxy. This is a classic example of what Janis identified as “groupthink,” in which skepticism and doubt about the orthodoxy are prohibited. Another term for frontstage DEI is the Potemkin village, a Russian term that refers to adding a freshly painted façade to buildings to mask the interior rot.

I surmise that you bit hard on the frontstage bait, much as cult recruits are seduced by a lyrical tale steeped in moralizing yet short on specifics. Frontstage DEI consists of sloganeering for an agenda of positive abstractions, seemingly admirable and even utopian. Indeed, this frontstage messaging is so aspirational that few persons could find anything objectionable in it.

DEI pronouncements are invariably suffused with a bit of reasonable frontstage program activity to provide a patina of legitimacy to the entire enterprise. Enough rhetoric of Enlightenment values is woven throughout the DEI lingo to establish familiarity and to resonate with reasonable people.

Much of it sounds like a program grounded in traditional liberalism, with fingers crossed that folks believe that “equity” and “equality” are one and the same. This facile resemblance to liberalism gets DEI’s foot in the door, with references to “educating for freedom,” “emancipation,” “love,” “community,” “dialogue,” “belonging,” “engaging with difference,” and even the occasional reference to “science.”

This is akin to the deceptive lingo used by cults to attract recruits—the Unification Church, for example, relies on “peace and unity” and love bombing to bait the cult’s hook. I speculate that many persons enamored of frontstage DEI initially have no idea that the backstage even exists, let alone the toxic ideology that animates it.

This is why so many otherwise intelligent persons are eager to “do the work.” They have switched off their critical faculties to favor a feelings-based affinity for the frontstage. They eagerly embrace the idea of viewing the world through an “equity lens,” which is otherwise known in mainstream academia as confirmation bias, the cherry-picking of data to confirm an already-held dubious belief. They buy into the façade of their own mental devising, and they simply remain unaware of the actual agenda and noxious ideology—whether through averted gaze, simple disinterest, inability to grasp what goes on, or the psychological need to be a footsoldier follower.

This is an intentional deception, of course. Behind this benign frontstage façade, we find the other face of the Janus—backstage DEI.

Behind the Façade: Backstage DEI

Backstage DEI is informed by critical racialism and is grounded in a pre-Enlightenment Manichean ideology of paranoia and conspiracy. This is the anti-scientific world of the “medicine wheel” and the “talking stick,” a world of hyper-suspicion, delusions, and ethnic discipline, where minority professionals are cautioned that “skinfolk are not always kinfolk.”

It’s a world of arbitrarily defined villains and victims, of “agents and targets,” of “storytelling” and “autoethnographies” and “lived experiences” and “counternarratives” and “testimonios” and “indigenous” enchantment. In fact, it’s a world akin to the primitive romanticism of Blake, Keats, and Wordsworth in their reaction against the Enlightenment, favoring instead magical thinking, fables, and an emphasis on feeling rather than reason.

This ideology is commonly called antiracism.

This Orwellian contrivance of antiracism has little to do with battling actual campus racism and everything to do with codifying a paranoid conspiracy theory into university policy. The conspiracy theory identifies its racial scapegoat in the form of a pseudocommunity of persecutors, a key marker of paranoia. This paranoid worldview is implemented in training sessions through thought reform techniques developed by Mao’s China and modern American cults. The techniques are also grounded in group psychological manipulation pioneered by Kurt Lewin and Robert Kegan and further developed in its American “social justice” version found here and here, among many other sources.

If you’ve been exposed to training in “diversity, equity, and inclusion,” you may already sense something greatly wrong with all of this. It doesn’t align with reality. Indeed, where is all of this rampant racism that supposedly infests your campus yet is never identified?

You may have thought it was strange, contrived, unsubstantiated, and alien to your own broad and deep experiences. You may also believe it arrogant for a stranger to lecture you on your beliefs and your behavior based only on your superficial characteristics. In fact, if it seemed that you were and are under attack by zealots with a tiny and distorted worldview, that’s a common experience.

The training sessions offer benign-sounding labels—“difficult dialogues,” “courageous conversations,” “brave spaces,” “safe spaces,” and “racial caucuses.” These are all forums for the propagation of the antiracist paranoid conspiracy.

This conspiracy emerges from shared paranoia. It is grounded in prejudice and Manicheism, is manifested in bombast, and it’s justified by outright pseudoscience based on the evidence-free assumption of a “racism” that is all but nonexistent in any meaningful form on campuses. Indeed, the absence of evidence and the hostility toward requests for such evidence of “racism” is the hallmark of conspiracy theory and pseudoscience.

This conspiratorial doctrine is suffused with paranoia, and the behavior of its adherents display all of these characteristics, often in exaggerated form: 1) displacement of responsibility, 2) suspiciousness, 3) grandiosity, 4) delusional fixity, 5) creation of a paranoid pseudo-community of persecutors, and 6) creation of a tight, self-sealing interpretive system.

For this absurd fantasy to gain even a modicum of traction, a degree of deception and control is necessary. The odd training experience exhibits a tight control exerted by DEI cadre over the agenda and, of the sources presented, which consist of exotically curated material that excludes the substantial body of academic literature debunking the dubious propositions of antiracism and critical race theory animating “DEI.”

A pretense is maintained that this is academically uncontested territory.

In fact, much of what is presented has shaky foundations, is buttressed with poor evidence, or is simply fabricated. The material is drawn exclusively from the cargo cult canon of activist critical racialism. To maintain the façade, DEI training omits the substantial mainstream literature that debunks Harvard’s Implicit Association Test, that debunks the “microaggressions” paranoid construct, that exposes the primitive anti-science agenda of so-called antiracism, that explodes statistical disparities as constituting any kind of evidence of bias. My own research that demonstrates the antiracism agenda employs crude brainwashing techniques borrowed from the Communist Chinese and American cults.

All this leads back, of course, to the neo-Marxist critical theorists (Herbert Marcuse, Theodor Adorno, Max Horkheimer, Erich Fromm) and ultimately to Karl Marx. Profoundly unoriginal, the critical racialist project on the campuses offers little more than the tired, crypto-Maoism of prior generations, refurbished to accommodate a new conceptual scapegoat to replace the bourgeoisie, the kulaks, and the capitalist roaders. The new villains of convenience are “whites,” “whiteness,” “white supremacy,” and “white privilege.” This is the social fantasy of the folks who “do the work.”

Small wonder that backstage DEI is kept obscured behind the frontstage façade, and it’s unsurprising that many persons are duped into embracing the agenda under such sketchy pretenses.

If you feel deceived, you can backtrack from this morass of critical racialism. You can “do the work” of deprogramming.

The first step in deprogramming from this toxic ideology is to recognize the Janus-faced character of frontstage and backstage DEI and that it presents a grossly distorted and incomplete version of reality, where villains and victims are marked by superficial characteristics and where students, staff, and faculty are dragooned into thought reform sessions. Understanding the good-and-evil DEI Janus is one key to understanding why the dystopian social fantasy should be rejected. Moreover, we see ample reason why the costly bureaucracies that administer these dubious programs on the campuses should be dismantled as well.

For a deeper dive into what constitutes the spirit of the authentic university, the accompanying graphic provides a list of essential references for cultural literacy in an uncertain world and recommended actions to roll back the anti-science, anti-Enlightenment vision of backstage DEI.

These are works essential to an understanding of modern American society, especially in university environments virtually controlled by groupthink bureaucrats. By contrast, the scholars and genuine academics here offer a positive vision for America that is expansive, emancipatory, and liberating.

The Enlightenment and its embrace of reason, logic, science, humanism, and progress remain the bedrock that supports free intellectual inquiry and knowledge creation in the modern university, Western civilization’s greatest achievement. It stands as a bulwark against the predations of pseudoscience, authoritarian ideologues, and fly-by-night bureaucrats. It simultaneously exalts the individual spirit and its limitless possibilities as expressed in the classroom with the core Enlightened pedagogical values of respect, merit, fairness, and equality. 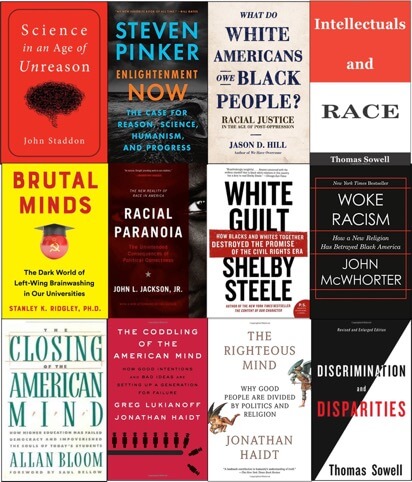