It’s been more than two days since the Associated Press called the governor’s race in Arizona for Democrat Secretary of State Katie Hobbs, but Republican spitfire Kari Lake is showing no sign of conceding the election.

[Update: In a video update to her supporters Thursday morning, Lake said she is “still in this fight with you.” Video posted below.]

She reacted with defiance, in fact, when the AP called the race for Hobbs, Monday night: “Arizonans know BS when they see it,” she tweeted.

Arizonans know BS when they see it.

The former news anchor currently trails Hobbs by about 18,000 votes, 49.7 percent to 50.3 percent, with 99 percent reporting. For the past week, the Lake campaign has urged  potentially disenfranchised Republican voters to check and see if their votes were counted, and to “cure” their votes if they were not. The deadline for curing votes in Arizona was Nov.16 at 5:00 pm.

Ballot curing under Arizona law allows voters with inconsistent signatures or no signatures on their early ballot to fix their ballots.

According to the New York Times, Lake is currently working with other Republican state campaigns to prepare a legal fight. Lake didn’t immediately respond to an American Greatness query about her next move, but her campaign appears to be making the case that the chaotic and poorly-run Arizona election disenfranchised Republican voters.

For the past week, Lake’s campaign has been collecting video testimonials that can be used in court.

One poll watcher who was stationed at the Eldorado Community Center in Scottsdale from 6:00 am to 1:00 pm on Nov. 8, explained in a video that things were running smoothly until a county technician showed up at around 11:30 am to check the voting equipment. After that, he said, the tabulators started malfunctioning.

“We started experiencing issues with tabulators not accepting voters’ ballots,” he explained.

These voters were told to reenter their ballots four different ways in the original tabulator, then if all failed, do the same thing in the second tabulator. Then if it failed again, go back to the first tabulator and try again. If all 12 attempts failed, they were given the choice of spoiling their ballot, having another printed, fill out their ballot again, and then try submitting them into the tabulators again.

He noted that the whole process took over 30 minutes, on top of the hour plus they had spent in line. “Their only other option was to place their ballot in drawer number 3,” he explained.

“I’ll never forget the look on these affected voters’ faces,” he added. “They were in disbelief that our system of voting was failing them en masse on the most important election day of the 2022 cycle. In the 44 years I have been voting—99 percent which was in person—I have never experienced such chaos, confusion, and voter suppression.”

Poll watcher said a county technician showed up and that is when it all went downhill. pic.twitter.com/ewsUy9HKzY

A voter in a “deep red” section of Maricopa County said an election worker at her polling place wouldn’t accept his ballot.

“I was told they couldn’t accept my ballot,” says Richard about his experience at the Desert Hills polling place.

Many reports of #AZVoterSupression have come out about this location, which is in a deep red district in Maricopa County. pic.twitter.com/wYFtlhWgW8

Another voter from Gilbert said the voting machine at her polling location rejected the ballots of “EVERYONE in line in front of and behind me.”

This is Erin from Gilbert, AZ who says that the machine at her polling location “rejected EVERYONE in line in front of me and behind me.”

Something needs to change in Arizona so that these widespread cases of #AZVoterSupression never happen again. pic.twitter.com/FHOLyRzq60

An Industrial Park voter said in his video testimony that after his Election Day experience, he has no doubt the malfunctioning voting equipment “disenfranchised and turned away a lot of people.” Lake said  Steve’s testimony was “just one of thousands” her team has received.

Steve’s Testimony is just one of thousands we have received

Almost HALF of all voting centers experienced similar issues. This is unacceptable.

Executive Director of the Arizona GOP said AZGOP staffers who manned the ballot curing hotline heard many heartbreaking stories from disenfranchised Republican voters over the past five days.

@AZGOP staff manned the ballot curing hotline the past 5 days. Heartbreaking stories. Desperation. One woman working 3 jobs & cast her vote for hope and a better future. Now it may not count. Shame on @billgatesaz and @stephen_richer and the entire BOS. #ElectionIntegrity @AZGOP

Arizona Young Republican Ari Bradshaw spoke forcefully about the election day voter suppression issues during a meeting of the Maricopa County Board of Supervisors.

Thank you @maricopacounty BOS for allowing me to speak today. I hope that the concerns of over a million Arizonans were heard loud and clear today.

Meanwhile, a video has emerged online that allegedly shows illegal ballot harvesting at an Arizona drop box in the weeks before the election.

Under Arizona law ballot harvesting is a class 6 felony.

The lawsuit, filed in October, claims that Maricopa County failed to hire an equal number of Republican and Democrat poll workers during the primary in August, and refused to provide documentation that demonstrated the County’s efforts to fix the problem.

The plaintiffs allege that during the August 2022 primary, 11 voting centers in Maricopa County “lacked even a single Republican poll worker.” Thus, the Republican plaintiffs are requesting “documentation that demonstrates the County’s efforts to hire Republican poll workers at the 11 voting locations.” Additionally, the RNC requests “[d]ocuments sufficient to identify the respective numbers of registered Republicans, registered Democrats, and individuals with other or no political party affiliations who have been hired” to administer the 2022 midterm elections.

The plaintiffs argue that not providing this information “prevents [them] from monitoring election activity in the most populous county with highly competitive races for statewide offices.” The plaintiffs request a writ of mandamus (a court order compelling a party to take a certain action) requiring the defendants to produce the information the Republicans demand regarding poll workers and other election administrators.

In a couple of tweets Wednesday, Lake signaled what her next move could be. 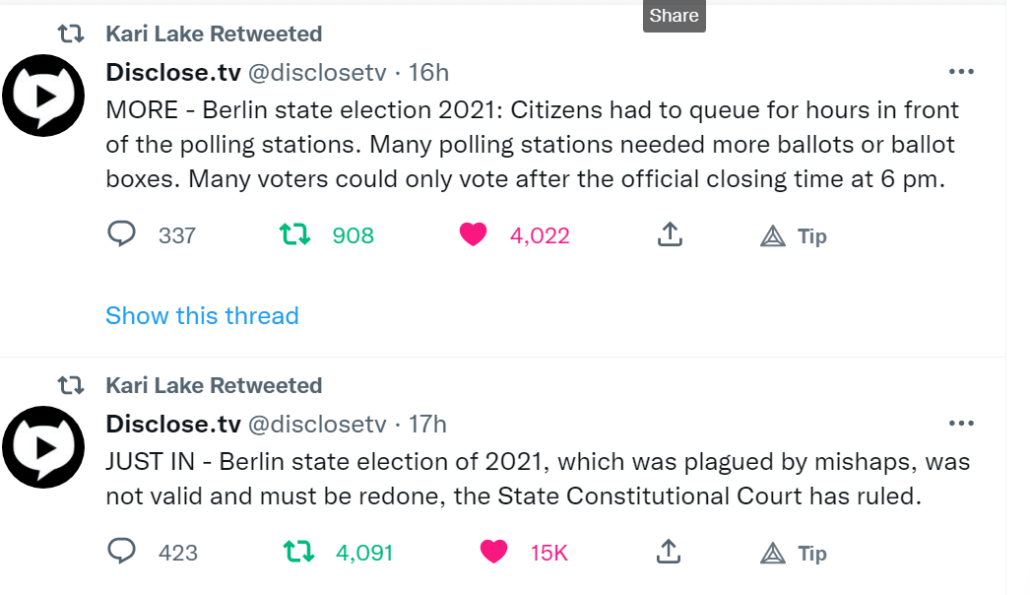 A German court voided a state election on Wednesday after severe election-day glitches caused confusion and chaos at many polling stations, DW reported. The problems resulted in long lines and many disenfranchised voters, as was seen in Arizona on November 8.

Another issue was that the election was supposed to end at 6 p.m., but voters waiting in line at that time were allowed to cast their ballots — at a time when exit polls were already public.

The constitutional court of Berlin declared the September 2021 vote invalid and ordered a rerun, according to DW.  In a statement, the court said that a partial rerun wouldn’t be good enough “in view of the large number and severity of the election errors.”

In her last tweet on Wednesday, Lake posted a campaign-style video with Tom Petty’s 1989 hit “I Won’t Back Down” playing in the background.

Lyrics to Won’t Back Down:

In a video posted on social media Thursday, Lake said she is still in the fight.

“I am busy here collecting evidence and data,” Lake said. “Rest assured that I have assembled the best and brightest legal team, and we are exploring every avenue to correct the many wrongs that have been done this past week. I’m doing everything in my power to right these wrongs. My resolve to fight for you is higher than ever,” she continued.

“I can promise you one thing,” Lake concluded. “This fight to save our republic has just begun.”

Arizona, we are still in the fight. pic.twitter.com/ytaGvqG5J0

Lake shared a slew of additional testimonials of Election Day disenfranchisement on Thursday:

It took Shannon over 2 hours to vote on Election Day.

Shannon asked to spoil her ballot & was able to vote with a new ballot.

Lines were around the block.

How many people didn't have two hours to spend at the polls? pic.twitter.com/4HgFo1DFKm

This is Maria from Anthem.

Maria waited for over 2 hours to cast her vote.

During that time, she was told that over 70% of the voting machines were inoperable.

People were given four opportunities to feed their ballots before placing them in a box to be counted "later." pic.twitter.com/fdsV3iEtni

This gentleman went to vote in Pinal County.

For two consecutive elections, his name "disappeared" from the voting rolls.

The poll workers asked him to re-register while filling out a provisional ballot, which they then placed in a third box.

His vote was rejected. pic.twitter.com/09l3x1B40f

This is Alfred from Maricopa County.

Alfred waited for an hour to vote on Election Day at his local church.

When he finally went to scan his ballot, he was rejected by the tabulators.

Alfred was told to put his ballot in a blue box so it could be counted 'later.' pic.twitter.com/AYWY61lqAx

This is Dan from Pima.

Dan has been voting for as long as he can remember.

When Dan showed up to vote on Election Day, they told him he was no longer on the voting rolls & gave him a provisional ballot.

Dan's vote has still not been counted.

He's not confident it will be. pic.twitter.com/WhIOQHuQhk

Jalen registered to vote at his community college campus.

When he showed up to vote they refused to give him a full ballot, & asked if he was an illegal immigrant.

After providing them proof that he was born & raised in Arizona, Jalen was STILL denied his right to vote. pic.twitter.com/TRUrFoFWtg

Marley got in line before polls closed and was turned away from voting.

Countless reports of this have came in from across Maricopa