In the latest InsiderAdvantage poll of the U.S. Senate and gubernatorial races in Nevada, the Republican candidates are maintaining their leads over their Democrat opponents, with the help of independents and Hispanics. 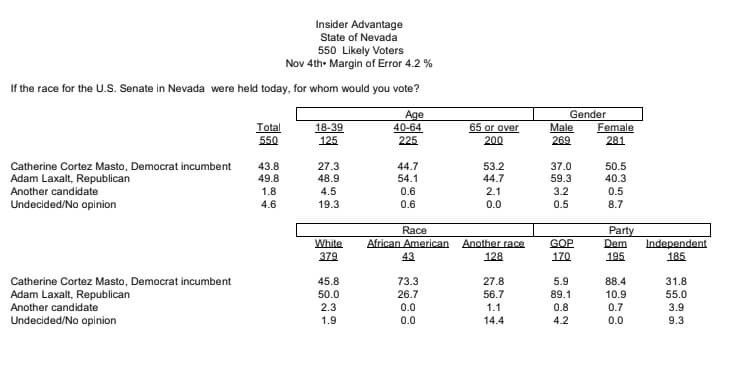 In the race for governor, Republican Clark County Sheriff Joe Lombardo is beating Democrat incumbent Steve Sisolak 48.7 percent to 43.5 percent, with 3.5 percent of likely voters opting for Brandon Davis, the Libertarian, and another 4.3 percent undecided/no opinion.

This InsiderAdvantage survey of 550 likely voters was conducted on November 4 with a margin of error of 4.2 percent.

“Voters who identify as independents and Hispanic/Latinos are breaking heavily in favor of both Republican nominees,” said Matt Towery, Chairman of InsiderAdvantage.