A Republican political outsider is giving Democrat incumbent Patty Murray a run for the money in Washington’s sleeper Senate race, thanks to Independent voters.  Tiffany Smiley, a veterans advocate and mother of three, is trailing Murray by less than two points—46.4 percent to 48 percent in the latest InsiderAdvantage poll of Washington state likely voters. Another 5.6 percent of responants said they were undecided or had no opinion.

The InsiderAdvantage survey of 550 likely voters took place on October 31, and has a margin of error of 4.2 percent.

It follows a Trafalgar poll on Monday that also showed the Senate race in Washington tightening. That poll showed Murray at 49.9 percent versus Smiley at 48.2 percent.

Smiley’s surge comes after she went toe-to-toe with Murray in a televised Town Hall.

ICYMI — Last night I participated in a televised Town Hall with @PattyMurray to discuss the issues facing Washington voters this election. 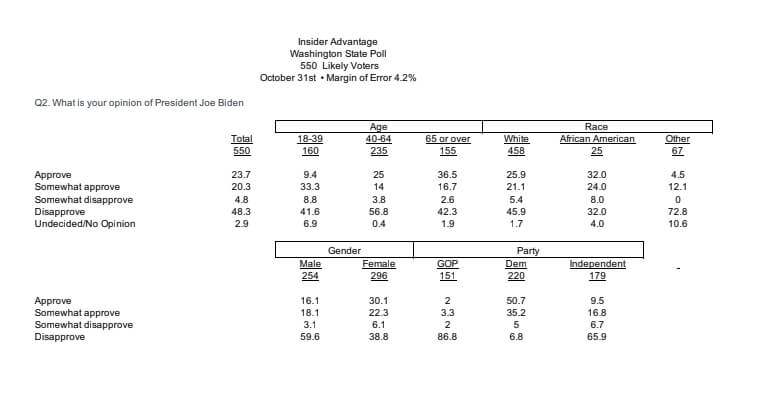 Biden’s term in office has been marked by a series of self-inflicted disasters and failures, including his botched withdrawal from Afghanistan, mishandling the COVID pandemic, out of control inflation, high gas prices, the border crisis, executive overreach, his increasingly authoritarian behavior, intentionally divisive/woke policies, his declining mental state, the recession, and his demonization of Trump supporters.