In Michigan, the governor’s race is tied, and Joe Biden is rocking a 38.9 percent approval rating, according to the latest Insider Advantage survey.

More male voters said they would vote for Dixon (52 percent to 37.2 percent), while more women preferred Whitmer 51.1 percent to 38.7 percent.)

Additionally, the poll shows Dixon winning the Independent vote by a significant margin (50.7 percent to 29.4 percent). 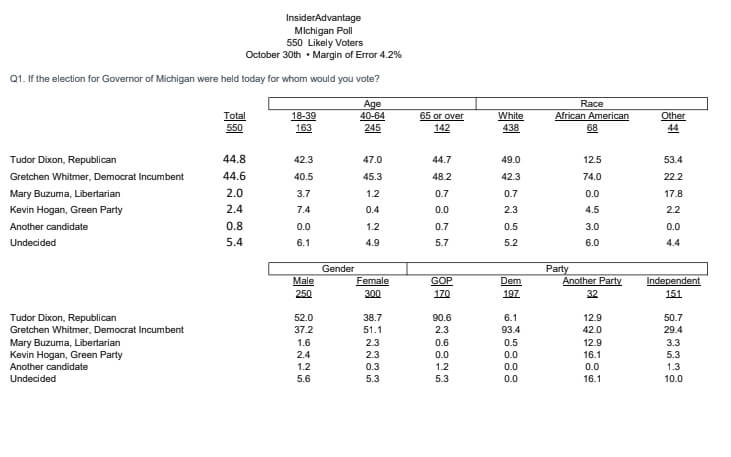 “The race is tied primarily due to the fact that voters who describe themselves as independents are breaking by a twenty-point margin in favor of Tudor Dixon,” said Insider Advantage analyst Matt Towery.

The survey of 550 Michigan likely voters was conducted on October 30, and has a margin of error of 4.2 percent.

According to the poll, only 38.9 percent of Michiganders gave Joe Biden a favorable rating, with 53 percent having a unfavorable opinion of him. Another 8.1 percent of likely voters had no opinion. 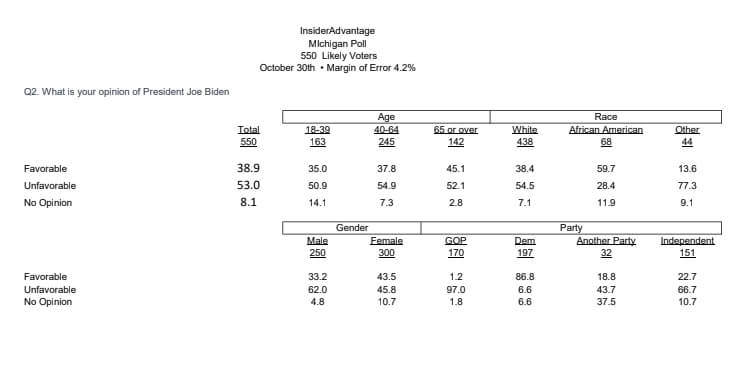 Biden’s term in office has been marked by a series of self-inflicted disasters and failures, including his botched withdrawal from Afghanistan, the ongoing COVID pandemic that he promised to end, out of control inflation, high gas prices, the border crisis, executive overreach, his increasingly authoritarian behavior, intentionally divisive/woke policies, his declining mental state, the recession, and lately, his demonization of Trump supporters.